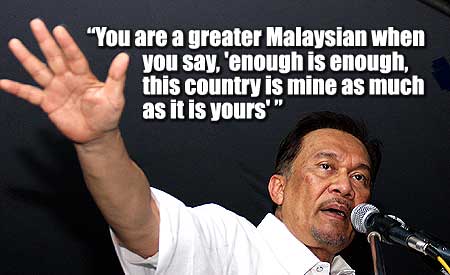 COMMENT | Once again, Malaysian politics has reached an imbroglio.

This latest cliff-hanger where PKR leader Anwar Ibrahim claims he has the numbers and Prime Minister Muhyiddin Yassin says until he sees 'solid proof' he is still the boss, will not be the last.

Not until a general election or snap election settles it once and for all with a clear mandate for the new leader.

Or better still, Muhyiddin hands over the reins of leadership to Anwar and do one better than the one who reneged on Anwar and whom Muhyiddin replaced.

After all, Muhyiddin is unlikely to last beyond GE15 or a snap election given his tenuous hold on power and incidental leadership.

Anwar was the prime minister-in-waiting after GE14. He was the deputy prime minister until his sacking in 1997. He has survived a gauntlet of obstructions and overcome the ordeal. Who else besides Anwar is more deserving and qualified to lead?

He could have thrown in the towel or worse, betrayed his principles and supporters and taken the compromised path but he did not. Who else deserves his place in history?

I have not met Anwar but I have met his late sister-in-law. On a family visit to Perth, I had shown her and her relatives around.

During a visit to Kuala Lumpur, she hosted a dinner for me. After dinner, she played the piano. And it gave me the opportunity to sing a song for her that I had written for Anwar when he was unfairly jailed in 1998.

Am I an Anwar acolyte? No, I am not even a fan, but I sympathise with his victimisation and certain political ideas.

When another political victim, DAP's Lim Guan Eng was jailed in 1994, I also sympathised with him and wrote him a poem that was published on a website his wife had created on the Internet. I predicted that someday he would be vindicated, and he was. His present predicament does not negate his rise like the legendary Phoenix.

I wrote the song for Anwar and someday I may record it for him because it encapsulated a nation's pain in watching his suffering. His suffering I see as symbolic of the nation's suffering under successive repressive regimes.

I still hold in my mind the image of a defiant Anwar shown on ABC News before his melodramatic arrest by balaclava-clad police.

Similarly, I felt Guan Eng was a victim of indefensible injustice. Here was a knight in shining armour who rescued a Malay damsel in distress, an alleged rape victim, but was unjustly charged, convicted and jailed. Rough Malaysian justice.

We need to speak out

Writing to speak out against acts of injustice should be second nature to every morally conscientious human being because indeed we are our 'brother's keeper'. We cannot speak out on everything for everyone but only those who are in need of dire support, and why not for the politicians we know and who try to serve the people?

Speaking out in support of them does not mean we are beholden to them or even believe in their cause. In fact, we may not even agree with their ideas. But it is the right thing to do because we believe in upholding the truth, fostering justice and promoting righteousness, and speaking out is the least anyone can do for victims of injustice.

As Evelyn Beatrice Hall once wrote “I may not agree with what you say but I will defend to the death your right to say it”. We may not take matters that far but we ought at least to speak out for the unjustly treated.

And in Malaysia, there are many instances of grave injustice requiring expose. How many victims of injustice there are, I don't know.

For too long Malaysia has been governed by snollygosters, one after another. A snollygoster is a shrewd, unprincipled, self-vested person, especially a politician, a frog. They have deformed the nation.

In 20 years’ time, a generation away, Malaysia will have fewer Chinese in the country. Who then will the Malay bigots blame for their poverty?

I received a forwarded post from a blogger called Steadyaku47 whose name was given as Hussein Abdul Hamid. In this particular post, he urged Chinese Malaysians and others not to desert their country.

It is a reasonable call but there is a proviso. Having lived in Australia for 30 years, he reckons Malaysians abroad, including himself, will want to return to their former country if there was none of the corruption that has wrecked the country for 60 years under Umno.

He wants to return but not until someone like Shafie Apdal is in a position to do away with money politics and hones in on a just policy of nation-building without racial and religious prejudice.

And he hopes Shafie will win the Sabah election. I do too because Shafie, who only recently got onto my radar, sounds like a decent politician, with a 'Malaysia-first' political DNA. He is the sort of politician the country desperately needs. Time will tell.

Above the political madding crowd, we have two leaders who share similar ideas on Malaysia. It behoves Malaysians to look to them as the Malay leaders that could provide the leadership the country desperately needs.

‘Two are better than one’ is a wise proverb. And if Anwar and Shafie can team up and recruit others into the cabinet, the New Malaysia may yet see its dawning. There are many other decent and outstanding Malaysians who can boost the growth of the nation.

Sabah and Sarawak have been shortchanged for a long time. Having Anwar as the country's leader and Shafie as deputy and a Sarawakian as the second deputy country leader is not far-fetched.

Some past and present cabinet ministers are underperformers. The posts of deputy ministers are redundant. A lean and capable cabinet is more effective if the public servants are also competent.

The fluidity of politicians has reached a point of ridicule for party politics to have any real meaning. What is needed is a ‘unity’ government of politicians who are honest and capable. Get rid of the corrupt and bigoted.

No party can survive on a narrow agenda. This is Malaysia not Saudi Arabia, now itself having to change. That is why PAS will never be accepted by the entire nation with its Middle Ages ideas.

The time has come to do away with political parties and let there be an ‘open election’. Let anyone who thinks he or she is fit to govern and be in parliament stand for election.

The country leader can then be elected by the parliamentarians. The one elected prime minister can then form his cabinet. This system will not preclude politicians from forming their blocs.

After all, this is already happening despite the party membership and party-hopping. How ridiculous it is when different members of the same party support different leaders.

An ‘open election’ enables capable technocrats, civic leaders, concerned citizens, etc, essentially those with the character, capability and conviction to serve the country without the dread of corrupt party politics to be elected.

Meanwhile, Anwar and Shafie, not either-or, is the future of the Pakatan Harapan plus others.

With an onstream of younger leaders, the majority Malays stand a better chance of a prosperous future with their fellow Malaysians than with the 'devil you know' and a corrupt political system.