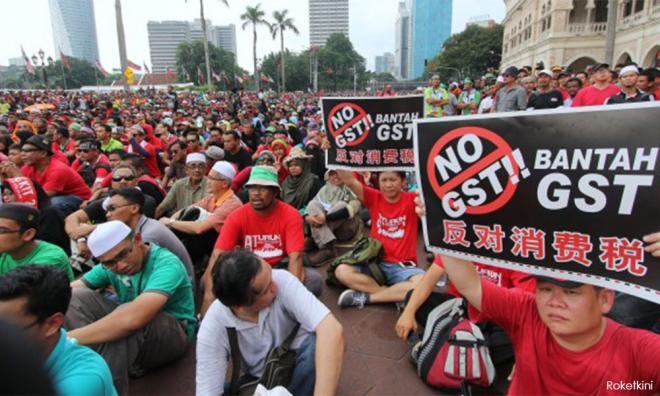 COMMENT | Putting the GST ghost to its final rest

COMMENT | Murmurs about the reintroduction of the Goods and Services Tax (GST) to generate revenue was recently heard in the chatters along the corridor of powers. Prime Minister Muhyiddin Yassin should put the GST ghost to rest once and for all by categorically denying that his government ever considered re-introducing GST.

Any sensible government in Malaysia would not waste any political capital on a question that was already resoundingly decided by a general election so clearly. One of the most salient topics in the lead up to and during the 14th general election was GST.

Whichever government that still thinks of GST as a revenue generator never learned from history and has no understanding of the economic factors that defeated BN in 2018.

GST was announced to Parliament in October 2013, after the 13th general election in May 2013, when the then prime minister and finance minister Najib Abdul Razak presented Budget 2014. GST was scheduled to be implemented on April 1, 2015.

The promoters of GST had argued that Malaysia’s tax base is too small and there are too few Malaysians – only around 16.5 percent – subject to individual income tax. Therefore, by implementing GST, the promoters were hoping to “expand the tax base”, as everyone needs to pay it whenever they consume.

Since 2013, I have been arguing that GST is the wrong cure to deal with a small tax base. Why are so few Malaysians paying income tax? Admittedly, there is some tax evasion. But the tax authorities have enough tools to deal with that.

Why then are so few Malaysians paying direct income tax? The answer is simple: they are too poor to pay income tax. Their income just does not qualify them to pay it. The Statistics Department’s (DOSM) most recent household income survey shows that, taking into account available deductions, households (not individuals) in the B40 group effectively earn below the amount where they would be liable to pay taxes.

To corroborate this, one just has to go back to the rationale for and thinking behind the introduction of Bantuan Rakyat 1Malaysia (BR1M) aid in 2012. Under political pressure from Pakatan Rakyat then, Najib and his deputy Muhyiddin Yassin pushed for this band-aid idea to give 60 percent of households a bit of money once a year to help tide them over.

BR1M is a recognition that 60 percent of Malaysian households are not doing well economically.

Juxtaposing these two – only 16.5 percent of Malaysians pay income tax and 60 percent of households are deemed poor – it should be evident to everyone that GST, which taxes consumption at a flat rate, was the wrong cure for the wrong problem.

The introduction of GST was akin to the government paying out BR1M/Bantuan Sara Hidup using the right hand to 60 percent of low-income households and then using the left hand to collect back more as a proportion to their income from this particular group.

By now, Malaysian economists should understand that GST is regressive. The poor and low- and middle-income families pay more GST as a proportion of their income than their richer counterparts.

GST became a political shorthand for Najib’s lack of empathy from the eyes of the voters due to a combination of economic factors: first, oil price and commodity prices slumped drastically from October 2014 for an extended period into 2016; Najib followed some ill-advised neo-liberal ideas to cut budgetary outlays in 2015 and 2016 when the economy was hard-hit by the oil slump, exacerbating the sufferings and anger; and the GST was introduced in April 2015. Such was the economic cocktail that helped Najib’s defeat in 2018.

In short, GST is a tax that kills the golden goose of consumption.

What should the government do? The government should attempt to restructure the economic model so that in a decade’s time, at least 60 percent of Malaysian households would earn enough to pay direct income tax.

It’s about creating a middle-class society with decent jobs and decent pay.

In terms of the government’s revenue, first of all, 2020 is the wrong year for governments to focus on increasing revenue. The world is in an unprecedented health, political and economic triple crisis not seen since the Great Depression and World War II.

And, at this stage, interest rates and borrowing cost are low.

What the government should do is to go across the aisle in Parliament and seek bipartisan consensus on some agreed long-term investments such as green infrastructure that would generate jobs, with a promise of no leakage and corruption. The government would then move to raise the deficit with bipartisan consensus to borrow for those investments into the nation’s future that would create immediate jobs to deal with the crisis.

In the long run, there are so many more alternatives to GST and consumption taxes in general. For instance, create a new, higher marginal tax rate for the top one to two percent of earners, so that they are on a significantly higher marginal rate compared to middle-class professionals.

There are also many foreign investors in Malaysia getting huge tax holidays for many years, often at a disadvantage to domestic small and middle industries. Some of them no longer deserve those tax holidays as they are no longer “pioneers”.

The finance minister can tell these foreign firms that to continue to enjoy tax holidays, and there needs to be a new “contract”: these firms invest heavily now to upgrade technologically and increase productivity, to create jobs for Malaysians, and to pay Malaysians better. If not, their tax holidays would be gradually wound down.

Ultimately, if corporations are making a profit and if Malaysians are doing very well in their jobs, when we have a 60 percent middle-class society that qualifies to pay income tax, it is a virtuous cycle for all Malaysians.

I sincerely hope that the GST ghost will be put to rest and Malaysian economic thinkers rise to realise the follies associated with GST in the past decade. So much time wasted on nothing just because the powers-that-be and many economists failed to understand that the fundamental challenge facing this nation is the vicious cycle of low pay, low skill, low technology adoption and low productivity.

This article was first published at liewchintong.com.