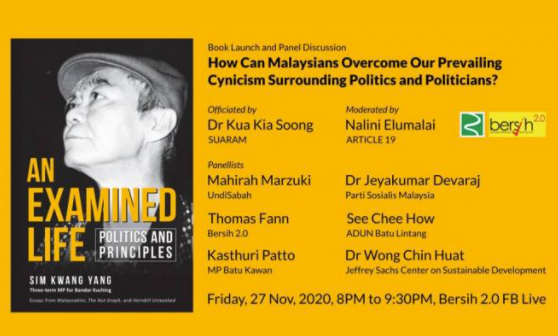 COMMENT | Sim Kwang Yang - universally known and addressed as “SKY” - was a great man: a patriot who as a parliamentarian and politician of utmost integrity, defended Sarawak, and the whole of Malaysia, its land and its peoples, especially the native and dispossessed, with courage and passion, and who was a lucid, learned and pungent writer. SKY was also my good friend.

Coincidence? I think not! I forget when I first met SKY, decades ago. We became friends, growing always closer until he left us in 2014. SKY was much fun, and a special delight to me because we could share lighthearted and serious literary and intellectual conversation. SKY encouraged me at my endeavours and gave me much-needed “lifts” more than once. I could tell many stories.

Therefore, reader, expect from me a candid review of the present collection of SKY’s essays, but do not expect a neutral one. In this age of fake news, conspiracy theories and downright lies, I am following SKY’s example by making plain at the start my bias of affection and gratitude.

‘Sim Kwang Yang: An Examined Life: Politics and Principles’ is a collection of 62 essays SKY wrote and published in Malaysiakini, The Nut Graph, and Hornbill Unleashed, a blog he started himself. SKY was a prolific writer. Sarawakians will remember his column “Hornbill’s Corner” (under the name “Ken Yalang”) in the old Sarawak Tribune. He published in Chinese as well.

‘An Examined Life’ is a fraction of SKY’s entire output, collecting some of his best pieces. It’s good we have a paper book, a physical volume that will sit on the shelves until it hooks its chosen reader. Pieces published on the internet tend to dissolve into their primal electrons and be lost forever.

This collection takes its title from a remark of Socrates in the ‘Apology’ recorded by Plato, in which Socrates defended himself in court from a charge of atheism.

“If I say again that daily to discourse about virtue, and of those other things about which you hear me examining myself and others, is the greatest good of man, and that the unexamined life is not worth living, you are still less likely to believe me.” [translation: Jowett]

As we know, the jury convicted him and sentenced him to death.

The oracle of the god Apollo at Delphi had pronounced Socrates to be the wisest man among the Greeks. At the entrance to Apollo’s temple was carved the inscription: “Know yourself.” Socrates - as he says in the speech - was puzzled by the oracle’s judgment, and with Apollo’s command in mind, went about testing himself and others through conversation to see what the god really meant. Many Athenians loved him, and he annoyed the hell out of many more.

SKY had a degree in philosophy from Canada and could have gone on to be a contemplative academician. Instead, he heeded the call of his country, and returned to Sarawak to engage in service to the people through politics, the most public, rough-and-tumble active life of all.

SKY joined DAP and successfully contested in three elections for the post of Member of Parliament for Bandar Kuching. His political activities are a matter of public record and he makes plain his own stances and opinions in his own words here. I am grateful for one particular act. SKY in Parliament exposed the attempt by the then chief minister’s brother-in-law to log our beautiful Gunung Gading here in Lundu, and saved the mountain.

Still, I have a poor head for nitty-gritty politics, and I can’t offer you anything in the way of analysis, so I will turn to SKY as philosopher MP.

Philosophy means, in ancient Greek, “love of wisdom.” To many, philosophy may seem a highfalutin’ self-indulgence, yet anyone who “hungers and thirsts” (as Jesus would put it) for wisdom is a philosopher. The questions of philosophy are those that any thinking woman or man - whatever their powers of thought or education - comes to. SKY summed these questions for me in one chat:

“How shall we live?”

And finally, “What can we hope for?”

The most humble people ponder these mysteries. And as SKY knew from his knowledge of native cultures, natives are as concerned with the meaning of things as anybody. Not a few pursue them with intensity. It takes courage to philosophise. We all want certainties. Yet when Socrates came to the conclusion of his search, with that of his life, he could say he knew only that he knew nothing. This might dismay anyone, yet Socrates persisted.

The so-called “Greek Miracle” happened when thinking people discovered that they could think anything whatsoever without a lightning-stroke from the gods incinerating them for their thoughts. People - aristocrats - could think anything, including the unthinkable: “Let’s kill off the lower classes.” (Not slaves, of course.) This freedom of thought was awesome and dangerous.

Philosophy was the taming and humanising of the reckless mind. Philosophy rests on logic, the most powerful of tools of the mind. At the heart of logic lies the Law of Non-Contradiction. “A is B” cannot stand with “A is not B.” The propositions are mutually exclusive.

Consider that thinking-whatever-you-want, without logic. In 1968 the reporter Peter Arnett sent a despatch from the Vietnam War regarding the battle of Ben Tre to the New York Times, in which he quoted an American officer who said, “It became necessary to destroy the town to save it.”

The contradiction is obvious to anybody who takes half a minute to think.

I believe that SKY was a profoundly courageous person in both his active and contemplative roles. Philosophy is a powerful tool, and trained SKY to see, to search for reasons and question the banal Malaysian political discourse. He held fast to the search for truth, and fought lies and corruption as an elected representative of the people, and as a journalist. SKY did not age well. As I watched over the years, I could see him physically deteriorate, until a stroke he suffered in his 60s rendered him incapable of reading or writing. His mind and affections were spared.

SKY’s thought is, so to speak, meaty, not forbidding, in its richness. His essays give the mind a good workout. I shall also credit SKY with conveying a matter of vital practical importance. I read the news in order to know enough to stay safe. SKY was at the centre of Malaysian politics and eyewitness to much, unfortunately, much bad: tumult, manipulation, chicanery, outright theft. When SKY explains how politics and government actually work - as opposed to our being told how they work - he gives us intellectual arms in our own defence.

SKY writes a beautiful English prose style. “Proper words in proper places,” as Swift recommended. And, like Swift, SKY is often very funny. Each piece is a pleasure.

SKY certainly deserves a biography, perhaps a collection of memoirs by friends in one volume. SKY talks about himself and his life now and again, and there are pieces not included in this volume. SKY’s life was remarkable. Sarawak can be proud to have been the birthplace of this great and humane thinker and doer. Read his essays. He justifies himself (without intending to) more than I can do justice to him here. If I have succeeded in searching out and giving the pith of his political philosophy, his philosophical politics, that is enough for me to manage.

OTTO STEINMAYER is a retired Professor of English, with a PhD in Classics from Yale University. He lives in Lundu, Sarawak, and is fluent in Iban, among many other languages.

‘Sim Kwang Yang: An Examined Life: Politics and Principles’ is available from Gerakbudaya. Gerakbudaya is organising a book launch and panel discussion: “How Can Malaysians Overcome Our Prevailing Cynicism Surrounding Politics and Politicians?

Book Launch and Panel Discussion: “How Can Malaysians Overcome Our Prevailing Cynicism Surrounding Politics and Politicians?"
22 Nov 2020
A 'hornbill' who has taken to the sky
2 Dec 2014
Was SKY the limit for the politics of hope?
1 Dec 2014
More power to the pen
28 Nov 2014
Ex-Sarawak DAP MP Sim Kwang Yang dies
27 Nov 2014