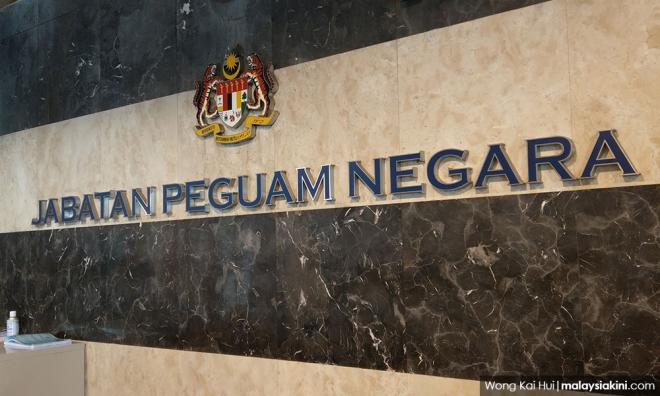 MP SPEAKS | Perception vs reality of the AG's office

MP SPEAKS | The revelations in Tommy Thomas’ memoirs prompted the current attorney-general and the honourable law minister to come out in full force to defend the reputation of the hardworking men and women from the Attorney General’s Chambers.

Against this backdrop, the general perception towards the office of the attorney-general (AG) remains in stark contrast from the realities. No autobiography or statements of assurance can change the perception and reality of the AG’s office until and unless Parliament reconvenes to carry out much needed structural changes and reforms.

In this regard, one crucial reform urgently required to restore the public’s faith in the office of the AG and by extension, in the government of any day is to speedily separate the AG from the public prosecutor (PP). I have been insisting on this since way back in June of 2018.

Pakatan Harapan’s 15th promise in its manifesto announced on March 8, 2018, had audaciously declared to Malaysians that “The Pakatan Harapan Government will take immediate steps to separate these two roles (the office of AG from PP)”.

The hansard dated Oct 24, 2018, records the manner in which I asked the seventh prime minister (Dr Mahathir Mohamad) in Parliament when the government would table bills to amend the present laws to separate the powers of the PP from that of the AG to ensure that the PP is able to carry out his functions responsibly.

The same Hansard further records how Sepang MP (Mohamed Hanipa Maidin), who was deputy law minister at the time, brazenly retorted that apart from the fact that there was no deadline set on when the Harapan government will make good of that promise (notwithstanding the express words “immediate steps”!), the Harapan government was dedicated in conducting comprehensive research first before fulfilling that promise.

By the time the Harapan government’s time in public office terminated after 22 months, the ‘comprehensive research’ was still ongoing. I wonder how comprehensive that research was, if there was even any in the first place!

If promises made by political parties and coalitions in manifestos were legally enforceable, then Harapan would have most certainly been summarily adjudged to have been liable for breach of promise without having needed to go for trial.

At the outset, it should be noted that the AG is appointed by the Yang di-Pertuan Agong on the advice of the PM and he has two main functions to perform. Firstly, he is to advise his majesty and the cabinet matters on all legal matters.

Secondly, the AG has an additional role as PP in that he “shall have power exercisable at his discretion, to institute, conduct or discontinue any proceedings for an offence,” i.e. to prosecute.

Interestingly, prior to 1960, an AG was not appointed on the advice of the PM but instead had to be chosen by the king from members of the Judicial and Legal Service Commission (JLS).

Crucially, there was security attached to the AG’s tenure in office because for him to be removed then, a tribunal of at least five judges had to be set up. Such a cumbersome procedure was in place probably and largely because he, the AG, had powers to prosecute as PP.

All that changed in 1960 when the government of Malaya tabled amendments to Article 145 to enable a possible AG to be appointed not only from members of the judicial and legal service but he or she can also be chosen amongst politicians, lawyers and even academicians. The safeguard for the AG’s removal was also obliterated.

I for one completely agree that the AG should be accountable to Parliament and his appointment need not necessarily be confined to the judicial and legal service for this will encourage the AG to be answerable to the Dewan Rakyat for his actions and omissions. However, I certainly do not agree that the safeguard to remove the AG had to be taken away in that process.

AG’s independence and conflict of interest

Although many years have passed since the 1960 constitutional amendments, many Malaysians are still unaware and continue to perceive that the AG enjoys a sufficient degree of independence whilst in office.

The AG’s functions which he performs as both legal advisor and chief prosecutor also create a situation of conflict of interest whereby the AG can conveniently render legal advice to the government whilst being safely confident that whatever actions or omissions that come about from his advice will not be prosecuted because it is he who commence and discontinue prosecutions!

Indeed, being armed with prosecutorial powers makes the AG one of the most powerful men in Malaysia. Hence, in the absence of any proper check and balance mechanism to ensure the AG’s independence and accountability, there is a greater need to guarantee that the AG’s powers are exercised responsibly and independently.

What is obvious from Thomas’ disclosures is that provisions on the office of the AG in the Constitution are nothing but an old structure in a new era, what more with the advent of social media.

In the context of “real likelihood of bias”, how can a person who is appointed on the advice of the PM as AG advise the government and simultaneously wield powers to prosecute? Where are the checks and balances?

If we are to make any progress as a nation, we must recognise that the Parliament can be utilised as a potential buffer with regards to the AG’s appointment and removal, thereby promoting accountability and transparency.

I sure am not a lone voice in the call for separation as I am also joined in by among others such as emeritus professor Shad Saleem Faruqi who rightly pointed out that separation is needed so that prosecutions can be conducted without fear or favour from political executives and more recently, the Malaysian Bar president who urged for separation as it would instil public confidence in the administration of justice, no matter who was appointed as PP.

In closing, if there is any silver lining from the exposés contained in Thomas’ autobiography, I hope that it serves as a catalyst for members of Parliament from across the divide to unite in order to make sincere attempts to oversee constitutional amendments with regards to the provision concerning the AG’s office vis-à-vis Article 145.