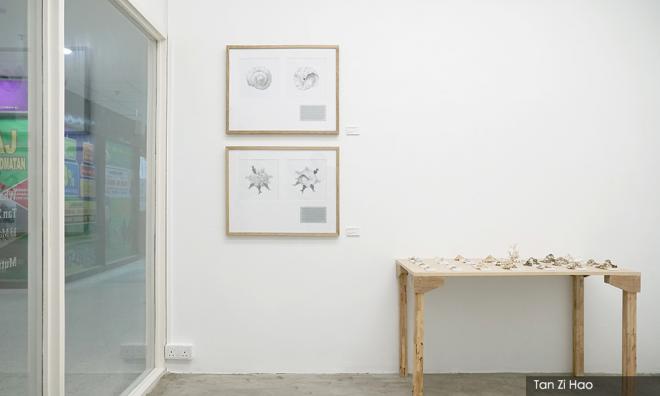 COMMENT | Mutual Aid Projects does not take up much space. The gallery occupies an office lot close to the end of a corridor at Wisma Central, Kuala Lumpur, itself an anomaly on the upmarket stretch a couple of minutes’ walk from the Petronas Twin Towers.

In its early days, it would have overlooked the old racecourse, and thanks to the quirks in its ownership system, the building has resisted demolition as hotels and high-end malls have increasingly invaded this prime location.

Behind the gallery’s glass walls, ideas and projects take flight – the latest being an investigation into the ideas of foreignness, coexistence and overlooked interactions of the natural world.

Tan Zi Hao’s “What’s Left for Gathering” works on many levels, taking as its foci two humble genera: Xenophora and Phereoeca. Dredged from the seabed and plucked from the corners of one’s home, juxtaposed against each other on the white walls, the exhibition samples tell stories about the idea and concept of gathering, of incorporating foreignness in a time of ecological degradation when the threat of scavenging and making do with what is left of the natural world seems imminent.

Here, Tan's collection of Xenophora shells is laid out on display, each one incorporating fragments of broken coral or studded with rocks, collected over time as the animal that once inhabited them grows and moves along, forming part of its protective coat as time goes on.

Some of them, coming across human trash littering the seas, have begun integrating manmade objects, such as...