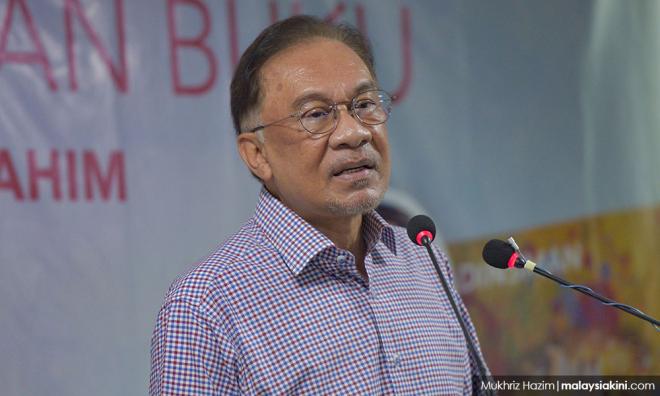 MP SPEAKS | Anwar Ibrahim deserves a chance to be PM

At the age of 74, this may be the last chance for Anwar to be prime minister and I sincerely believe he deserves a chance to prove himself after waiting for more than two decades since the reformasi movement started in 1998.

The following are the reasons why I advocate for Anwar to be prime minister and I believe many Malaysians will share the same view after careful calculation of the imminent crisis our country is facing now.

As a multiracial country, Malaysia was known to be a model example of how the country projected its image that promotes racial and religious harmony, not to mention Tourism Malaysia’s slogan “Malaysia truly Asia”.

However, this is not the case anymore after Perikatan Nasional (PN) stole the people’s mandate and formed the backdoor government through the notorious and despicable Sheraton Move. One of the lessons all can see is how PN Kedah’s government insulted the Indian community over Thaipusam and temple demolitions.

Malaysians and the world have witnessed the ugly face of vicious and wicked politicians who are willing to sell their soul, betray the rakyat and stab their comrades only for the lust of power and personal gain.

It is this notorious behaviour and despicable characters that will destroy the country if nothing is done quickly to repair the damage suffered by our democracy.

It is a known fact that Muhyiddin Yassin is an unelected prime minister with no mandate from the people and PN is dominated by either race-based parties or those who hijacked Islam for their selfish political interest, both of which are outdated politics.

Don’t forget that only politicians bankrupt of ideas will need to resort to race or religion to gain support simply because they have no idea on how to run the country based on integrity, transparency and good governance.

This country badly needs a healing process and the way to move forward is to stop the racial or religious sentiments that are so divisive and disastrous to our nation-building.

This is where Anwar is required and he is the most suitable candidate to play a historical role now to stop the country from becoming the next “Asia’s sick man".

Ever since PN grabbed power on Feb 24, 2020, Malaysia had started to fall in the eyes of the world and its deterioration is at such an alarming and worrying speed that all patriotic Malaysians must rise up in order to stop the rot.

As stated in UNCTAD’s report, in 2020 our country’s FDI dropped 68.2 percent losing out to the Philippines and Indonesia. To make it worse, Malaysia’s international anti-corruption index fell from the 51st to 57th spot and our credit rating was downgraded by Fitch Ratings for the first time in 17 years.

Our economy is in recession and suffered a 5.6 percent contraction and the unemployment rate among the youths is at a historical high of 17.5 percent, which means nearly a million Malaysians have lost their jobs and are unemployed.

Most Malaysians can see the mishaps, flip-flops and double standard policy shown by the PN regime which caused the taxpayers to pay for the largest but mediocre and unproductive cabinet.

To make matters worse, Parliament and all state assemblies are suspended in the name of an emergency while all schools, cinemas, reflexology centres and even night markets are allowed to operate.

It is crystal clear the PN government has no commitment to reforms and it is doing anything it can including destroying our country’s democracy just to stay in power.

This is really too much.

Our country just cannot go on like this and badly needs new leadership that is committed to the reform agenda and towards promoting multiracial politics that unite instead of divide Malaysians.

Since 1998, Anwar has been the beacon of hope that propelled a reform movement based on a multiracial political platform, he was tested many times yet he persevered and was even magnanimous enough to forgive former premier Dr Mahathir Mohamad.

It is undeniable Anwar does carry some political baggage but which Malaysian politician is a saint without baggage?

As a former deputy speaker of the Dewan Rakyat, I witnessed how committed Anwar is towards implementing the reform agenda be it institutional reforms or parliamentary reforms.

During the period when I served the Parliament, Anwar was always the first leader to show concern and enquire about the progress of our parliamentary reforms including the drafting of the Parliament Services Act and the Parliament’s caucus on reforms.

When facing ferocious attacks by political opponents including from Mahathir, Anwar chose to focus on the people’s plight instead of engaging in a war of words. He has gone through the worst any politician could expect but what hasn't killed him has simply made him stronger.

He has been insulted, jailed, humiliated and betrayed even by his protégé but Anwar did not give up and continued to soldier on.

Great leadership will only manifest when you are put to the test and I believe Anwar has the necessary credentials and character to take our country to new heights based on a multiracial Malaysian agenda.

Anwar is among the very few Malaysian political leaders capable of representing the country on the world stage and he has a good international diplomatic network including with the United States, Turkey and many more.

Such a network is useful when we need strategic smart partnerships to develop our country so the well-being of the people can be safeguarded.

No one is perfect, including Anwar, but history will prove that he has a duty to rebuild our nation and make Malaysia a great nation again and well respected.

Malaysians have to decide the path they want the country to proceed along and I believe Anwar is the most viable option and he definitely deserves a chance.

Last but not least, you may disagree with what I have written but at least give Anwar a chance to prove himself. It will never be too late to reject him but only after he has been given a chance.