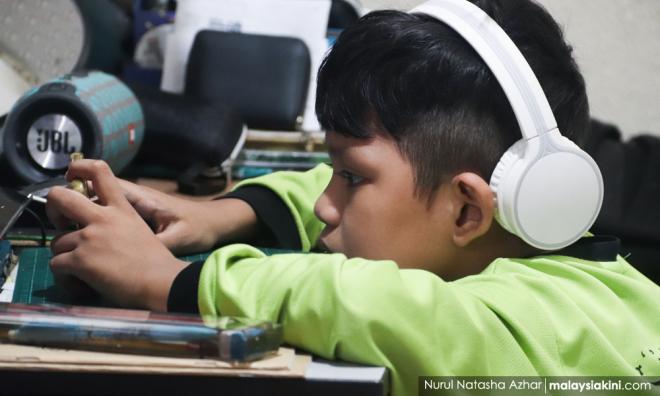 COMMENT | As we have been alerted by another phase of school closure after Hari Raya Aidilfitri holidays, there are several issues that need to be continuously worked on - for the students, parents, and teachers to be able to cope with online learning at home.

As reported, there are 99 education clusters as of April 25 and so far, many schools have been ordered to close for sanitisation due to detection of Covid-19 cases.

Education Minister Mohd Radzi Jidin announced that school sessions will be conducted online for two weeks (from May 16 to 28) after the Raya holidays.

This is said to be an effort to mitigate the risk of Covid-19 infections in schools after the holidays since if we look at it realistically, unless everyone is responsible to observe the standard operating procedure (SOP) and there is stringent enforcement during this festive celebration, there are likely to be fresh cases.

But the common question or concern that is usually raised when it comes to online learning is, are students committed to it? Do they have enough or the right gadgets at home? Can the parents afford digital devices for their children? Do they have stable Internet connectivity?

The ICT Use and Access by Individuals and Households Survey Report 2020 released by the Department of Statistics (DOSM) has revealed that the percentage of households with access to digital devices, namely computers, was 77.6 percent, higher than the preceding year’s figure of 71.3 percent.

It can also be seen that access to computers remains lower than access to mobile phones (98.6 percent), which explains why most students have been using smartphones to attend online classes. Nonetheless, this could also become an issue in the sense that it is more convenient for students to attempt online learning activities with laptops or tablets – to look at presentation slides, and exercises/questions.

But, anecdotally, some parents might not be able to afford the costlier digital devices, especially amid the current challenging economic environment. Some students also need to share the same device with their siblings due to affordability issue.

Data also shows that there is a big gap in terms of access to computers between households living in rural areas and those living in urban areas – 55.5 percent versus 82.8 percent respectively.

Another big concern is Internet access or connectivity. Based on official statistics, a gap exists in terms of Internet access between urban and rural households – 93.5 percent and 83.9 percent, respectively. Even within the urban areas, plenty of students are still having problems with Internet connectivity that would disrupt their learning activities.

What’s worrying is that these issues in adapting to online learning can lead to students losing their motivation to learn.

One way of dealing with this issue is by providing smart devices to those in need such as the B40 households. As announced in Budget 2021, this initiative is related to the RM150 million allocation for Tabung Cerdik to provide laptops for 150,000 students in 500 schools.

As reported on April 25, 13,000 laptops have been distributed by GLCs and GLICs to various State Education Departments involving more than 1,000 students as beneficiaries.

By the end of May, Cerdik targets to have at least 50,000 students receiving digital devices and the remaining 100,000 devices to be distributed by end-September this year.

Given the need to have students learning online again due to increased risks of Covid-19 infections, the government needs to speed up the distribution of the devices in order to facilitate students’ learning process and to also ease the burden for parents who cannot afford the devices as their financial status doesn’t allow them to do so.

However, concurrently, discipline in using digital devices needs to be instilled within the student community and this is where the role of parents is crucial. This is very important to ensure that there is no abuse in usage and to try to make online learning as effective as physical classes.

Efforts to improve Internet connectivity should also be expedited via National Digital Network (Jendela), given the extended need for students to learn online. Based on Jendela’s 2Q21 report, the number of network complaints received in the first quarter of this year had gone up again to 54,538 (28,577 in 4Q20). The largest share of total complaints continues to be contributed by poor 4G coverage.

And finally, there needs to be monetary aid for teachers who have had to spend their own money to cater to online learning for the students. Just like students, teachers also need to be supported and motivated in many ways to keep on educating.

To make online learning work so long as the uncertainty remains, mutual understanding and cooperation between the students, the parents as well as the teachers is very much needed.

SOFEA AZAHAR is a research analyst at Emir Research, a think tank focused on strategic policy recommendations based on rigorous research.