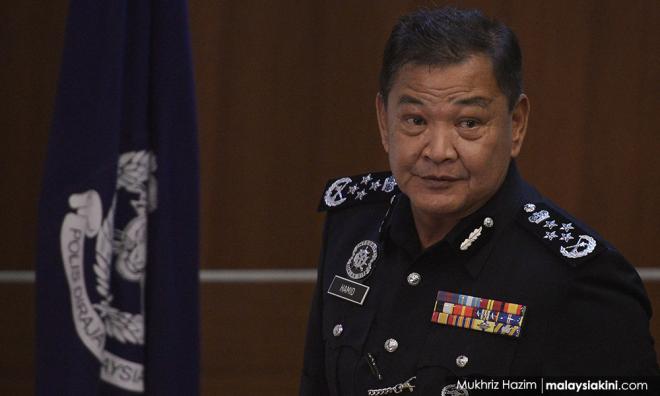 ADUN SPEAKS | The outgoing Inspector-General of Police Abdul Hamid Bador was not the first high-ranking government officer to contradict his minister in public. Way back in 1990 the then retiring air force chief Mohamed Ngah Said took a swipe at his minister, Tengku Ahmad Rithauddeen, who helmed the Defence Ministry.

However, there are several notable facts putting these two rare occurrences in their proper perspective and circumstances. While Abdul Hamid (above) was a contract officer, the air force general Mohamed Ngah was not. And while Mohamed Ngah was serving a government whose legitimacy was not in question, Abdul Hamid was serving a government whose majority in Parliament has never been proved.

Allegations of interference by the ruling politicians levelled by Abdul Hamid are serious but in the context of the police force – which is part of the federation public service as specified by the Federal Constitution – and indeed other branches of public service, one needs to see the specific incidents.

This is indeed the reason why the constitution has provided various commissions to take care of the admission, promotion and disciplinary matters affecting members of the public service. For both the military and the police force, the minister plays a key role.

That is quite natural given the nature of government in the parliamentary system: that it is the sitting government that is answerable to Parliament. It is at the ministry that the buck stops. Here lies the reason for the individual responsibility of a minister within the context of the doctrine of ministerial responsibility.

The Reid Commission did not offer much explanation to the notion of public service neutrality. But it appears that the way the service commissions under the constitution work, especially in the light of criticisms levelled by Abdul Hamid, is just a formality. This is a far cry from the ideal set forth by the Reid Commission which envisaged a system where the public servants would be able to tender advice without fear or favour to the sitting government.

It is high time that a royal commission dealing with the constitutional position of public servants be put in place. When the Reid Commission wrote the recommendation close to 70 years ago, the situation was different. For one thing, we have had situations where the sitting government lost the general elections. Within that period, too, many changes have taken place.

These include attempts to impose a pledge of loyalty to the sitting government on the public servants. Such took place during the Mahathir administration in 2001. Abdul Hamid, on several occasions, had said that former prime minister Dr Mahathir Mohamad was his role model.

Admittedly, the relationship between the ruling government and public servants has occasionally become a public debate. In the United Kingdom, the prototype of the Westminster system, such was raised during Conservative rule between 1979 and 1997. It is indeed inevitable that such an issue has raised its ugly head now in Malaysia. But it is crucial in order to protect the image and integrity of the public service which, in a sense, is a constitutional bulwark for the citizenry, especially those who do not share the political beliefs of the government of the day.

Back to the police force, perhaps the allegations of political interference is another good reason for the setting up of the Independent Police Complaints and Misconduct Commission (IPCMC), one which would help the police force to become more professional and no longer be seen as a political tool for the sitting government.

In his last media briefing, Abdul Hamid did make references to certain unhealthy political manoeuvrings with which the force somehow got itself entangled.

ABDUL AZIZ BARI is state assemblyperson for Tebing Tinggi, Ipoh, Perak, and the leader of the opposition in the Perak state legislative assembly. He is also a law professor and former state exco member.

COMMENT | Hamid Bador had nothing under control
3 May 2021
'I do not intend to overstay one's welcome' - outgoing IGP
2 May 2021
Disturbance in the force: IGP explains why he only spoke out now
1 May 2021
Why didn't Abdul Hamid speak up earlier, asks Bersatu man
1 May 2021
Outgoing IGP's claim warrants RCI, says Puad
1 May 2021