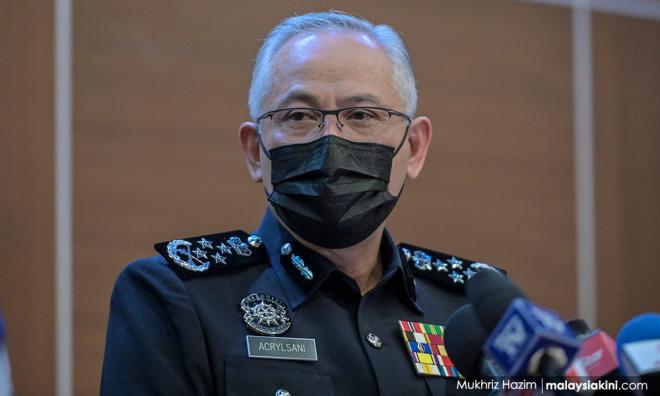 ADUN SPEAKS | Inspector-General of Police (IGP) Acryl Sani Abdullah Sani has come out with a “brilliant” new idea that those detained by the police must undergo medical screening.

It looks like the police are concerned about deaths in police custody, especially the recent deaths of A Ganapathy in April, S Sivabalan in May, both detained in the Gombak police station, and the recent death of Surendran Shanker, detained in Selangor, but later placed in Simpang Renggam prison in Johor.

I am not saying that medical screening is not important, but it might not be the real solution to stop deaths in police custody.

It is not that there are no standard operating procedures (SOP) as to how the detainees are to be treated, but adherence to these seems rather minimal in the police stations.

An additional item such as medical might strengthen the existing SOP, but whether it will deter deaths in custody remains to be seen.

Acryl Sani (above) as the newly minted IGP must not blow medical screening out of proportion to the extent that the behaviour of police personnel towards the detainees, in general, is overlooked.

My question is: How is the police force going to alter and shape the behaviour and attitudes of police officers who have been appointed to bring law and order?

Why is there a common tendency among some sections of the police force to regard detainees on remand as criminals without them undergoing due process?

The police are there to investigate and apprehend suspected criminals, but it is up to the court of law to judge whether they have broken the laws.

The police cannot act as the prosecutor, the judge, and the executioner.

Meting out harsh punishments to suspected detainees even before the evidence is gathered and taken to court is the major cause of deaths in custody.

Acryl Sani should really look into this subjectivism before mechanically responding, in terms of medical screening, to prevent deaths in custody.

One more item in the form of medical screening is not going to fundamentally alter the landscape of custodial deaths.

As have said numerous times in the past, the police cannot investigate their own personnel on the matter of deaths in custody.

Improving the SOP and the institution of other measures are important, but they by themselves are not a sufficient deterrent.

The police force must come to terms with two forms of inter-related subjectivism: that those detained are by definition guilty of a crime and the other is a common belief but widespread that police are beyond the law.

In other words, there is no way that the police personnel will be prosecuted.

It is this notion of impunity from prosecution that has emboldened some elements within the police force to take on the roles of investigators, prosecutors, judges, and executioners.

Contrary to the bureaucratic thinking of Acryl Sani, deaths in custody cannot be deterred by adding on the existing SOP. If the police SOP is grossly inadequate, what differences does it make to just add on additional things?

While Suhakam and the Enforcement Agency Integrity Commission (EAIC) must take a vigorous role in investigating the deaths in custody without fear or favour, their role is limited to merely an advisory role. A role that government institutions do not take them seriously especially the police force.

Whichever directions one turns, there is no escaping from the dire and urgent need of an independent agency to investigate and prosecute those responsible for deaths in custody.

In this respect, the police are not above the law. In fact, punishment should be harsher on them simply because they are the guardians of law and order.

I would advise Acryl Sani not to beat around the bush in addressing the problem of deaths in custody. He should not pretend that all is well with the police force except to plug a few holes here and there.