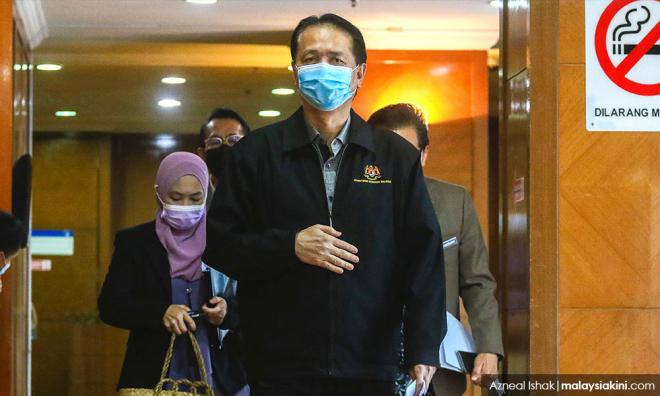 MP SPEAKS | Yesterday, Health Ministry director-general Dr Noor Hisham Abdullah asserted that if all conditions remain the same as Labuan, and assuming an average vaccine efficacy of 80 percent, the number of cases is expected to drop below 1,000 a day by October.

The Health Ministry should not be making promises it is not able to keep. When MCO 3.0 was launched on May 23, Malaysians were told the number of cases will be reduced if Malaysians sacrificed their livelihood by staying home.

Cases did not drop. Then, the government announced a "full MCO" on June 1 for an initial two weeks. The number of positive cases remained sticky and the full MCO was extended for an additional two weeks.

It obviously didn’t work because a further two weeks of enhanced MCO was then imposed on the Klang Valley from July 3. And for the past three days of this enhanced MCO, Malaysia consistently set records of new positive cases with 13,215 recorded yesterday (July 15).

This calamitous scenario clearly proves the Health Ministry failed to carry out its duties to mitigate the spread of Covid-19, even as people suffered in silence, losing income and livelihoods, hoping to return to some form of normalcy as quickly as possible.

What’s more, two days ago, Noor Hisham provided the flimsiest of excuses to defend his ministry’s performance. He said at a press conference for selected media:

“We imposed a strict movement control order on June 1. Within 10 days, we flattened the curve from 9,020 cases to 5,000 and 4,000 cases. But now the cases have risen again. One of the factors for this rise is due to Covid-19 variants. The dominant variant now is the Delta variant... the Delta variant spreads very quickly.”

I found it extremely disconcerting that the most senior health officer in the country is telling half-truths and manipulating numbers.

It was not 9,020. There were indeed 9,020 cases recorded on May 29, but just that one day – not June 1, and not reflective of the overall average number of cases in the prior week.

Then the Health DG claimed the number of cases dropped to 5,000 and 4,000 “within 10 days”. Except they never did! For the next 10 days, the number of cases fluctuated between a high of 8,209 and a low of 5,271. And it must be noted that the low figure of 5,271 was reported on a Monday for tests carried out on Sunday, which typically have the lowest number of tests in a week.

So how did the Health DG conjure up his magical success of reducing the number of cases from 9,020 to 4,000 in 10 days of the full MCO?

Secondly, even if accurate, it was irresponsible for the Health DG to cite these numbers because he failed to take into consideration the impact of the reduced testing by the ministry on the lower number of reported cases.

The positivity rate between the two weeks showed only a marginal drop from 6.96 percent to 6.61 percent. This means the overwhelming bulk of the reduced positive cases was a direct result of reduced testing, and not from reduced infection!

In fact, the DG must explain why the Health Ministry reduced the number of tests for five consecutive weeks throughout the MCO and full MCO period despite high, and subsequently rising positivity rates? This is shown in the chart above. The cynical might even deduce that it was a disingenuous attempt to report lower case numbers by clearly testing less.

Does the Health DG think he can get away with half-truths and manipulated statistics to defend his ministry’s performance because Malaysians are gullible and cannot count?

Malaysians can see clearly now the Health Ministry did not take testing seriously. It also was not concerned that the positivity rate was well above the World Health Organisation (WHO) benchmark of five percent. This is arguably the main cause of the explosive rise of community infections to repeatedly break records in the past few days.

Worse, the Health DG tried to cite the Delta (and other) variants as the cause of the rise in the number of cases in recent weeks. However, is that mere speculation? That is because the currently published variant incidence statistics by the ministry itself does not show that these variants, while present, are anywhere near widespread in the community.

The Health DG must stop speaking like his fly-by-night minister and report the facts like a professional. Do not give Malaysians half-baked excuses and speculative projections.

Instead, give us a proper plan - like how the Health Ministry will increase testing directly and via third parties, what positivity rate reductions we want to see, as well as other concrete measures the ministry is doing to upgrade and expand our facilities and resources to fight Covid-19.

TONY PUA is the Damansara MP and the DAP National Publicity Secretary.