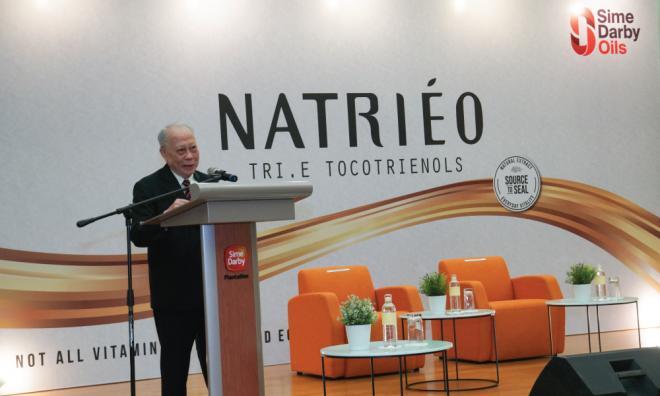 Into the science behind Malaysian palm oil

“Why the leaves are green?”

“I wanted to see beyond what the eyes can see,”

Such were the pauses for thought prompted by Academician Tan Sri Emeritus Professor Datuk Dr Augustine S.H. Ong when interviewed by Dr. Wong Kah Keng and Dr. Lee Hooi Ling, for an inspiring story published in 2013, in the Scientific Malaysian magazine.

Growing up in a small rubber plantation in Alor Gajah, Melaka, Ong’s childhood was indeed inspired by nature. He had the inborn tendency to seek connections with the little everyday miracles of life. That’s how he nurtured his curiosity at an early age and he still does, in his 80s now.

The relentless quest for answers to the many “whys” - ultimately bestowed upon Malaysia and the world - a scientist known for his very inventive and innovative thinking.

Call him the scientist, chemist, innovator, mentor or leader, Ong would not mind wearing different hats, as long as he can put his knowledge to good use.

The president of the Malaysian Oil Scientists' and Technologists' Association (MOSTA) is a towering figure in the teaching and research fraternity, the oils and fats industry, and the palm oil industry, both locally and overseas.

From the wonders of nature to scientific discoveries at laboratories, the name “Prof. Tan Sri Dr. Augustine Ong” stands for an innate thirst for new knowledge.

The graduate of the University of Malaya (First Class Honours: Bachelor of Science, and subsequently a Master of Science) and King's College London (PhD in Organic Chemistry), who was a Fulbright-Hays Fellow (1966 – 1967) at the Massachusetts Institute of Technology (MIT), USA, is internationally recognized in the field of lipid chemistry.

Ong started his career as a lecturer with University of Malaya in 1959 and has since become active in research and development (R&D). His vast experience includes the chemistry and technology of palm oil with over four decades’ involvement since 1974.

He has so far held 20 patents in the technology of palm oil to his credit and published more than 400 articles. The former professor of Physical Organic Chemistry at University of Science Malaysia (USM) obtained his first patent from Britain in 1974 on lipids research of olein-stearin separation method. His other patents in palm oil research are from the US, Japan, Australia and Malaysia.

Ong’s mission-critical scientific research with reassuring findings have inspired other scientists in different parts of the world to follow suit, and hence innovating the palm oil industry, vertically and horizontally.

The former director-general of Palm Oil Research Institute of Malaysia (PORIM), now known as the Malaysian Palm Oil Board (MPOB), took on the anti-palm oil campaign masterminded by the American Soybean Association (ASA) in the 1980s, head-to-head, together with Tun Dr. Lim Keng Yaik, the then minister for primary industries, and Tan Sri Borge Bek-Nielsen, former chairman of United Plantations (UP).

The 3-year (1986 – 1989) disinformation-vs-science-based war ended with a victory to the palm oil industry, safeguarding the livelihoods of millions of stakeholders, especially the three million plus smallholders, who contribute about 40% to the global production.

Today, the founding president of MOSTA, who also founded the Malaysian Invention and Design Society (MINDS) in 1986, holds a key role in nurturing new scientists, technologists and inventors.

MINDS showcased 975 inventions from 21 countries at the recently concluded International Invention, Innovation & Technology Exhibition (ITEX 2019) to nurture creativity and invention as its focal point. The organisation, which has published two commemorative books to mark its 25th and 30th anniversary respectively, aims to achieve at least 1,000 inventions per year.

Spanning over six decades, the energetic Ong just keeps doing what he does best – learning, discovering and enhancing the chemistry and technology of palm oil. In other words, he takes pride in enriching people’s lives through scientific papers.

Between 2006 and 2011, among the notable discoveries he made include: the sn-2 hypothesis co-proposed by his colleague Dr. S H Goh, which shows palm oil is less fattening than corn oil and soybean oil, based on comparisons of their triglyceride structures; the inception of a new palm oil milling process that resulted in zero waste through a patented process, based on a concept that oil palm fruits are edible, including palm puree fractioned upon removing crude palm oil, thus creating a new source of healthy food for the world (the novel process also identified new sources of carotenes, vitamin B complex, beneficial polyphenols and vitamin E, including tocotrienols); and the creation of a new green product by expoxidising used cooking oil that is very beneficial to the environment.

In his memoir entitled "In pursuit of scientific truth: Ideas matter" launched by Isnaraissah Munirah binti Majilis, deputy minister of the Ministry of Energy, Science, Technology, Environment and Climate Change (MESTECC) on 2 May 2019, Ong draws our attention to the war of oils and the developments towards the sn-2 hypothesis, which scientifically explains why palm olein and virgin olive oil (VOO) exert similar effects on low-density lipoprotein (LDL – bad cholesterol), high-density lipoprotein (HDL – good cholesterol) and Total Cholesterol/ HDL ratio in human trials and why palm olein is less fattening than VOO (based on animal studies).

Ong also conceptualised the conversion of palm oil into biodiesel in 1981. The project began with a pilot plant study, went on to field trials and subsequently proceeded to mass production for commercialisation in Malaysia, Thailand and South Korea.

Today, Malaysia is one of the world’s leading biofuel producers, with at least 58 biofuel plants approved for production, thanks to the innovative foundation fueled by Ong’s ingenuity.

“Why should we retire when we enjoy what we are doing?” he replied firmly, when asked about his retirement. Hats off to such a stalwart industry dynamo!

Ong was honoured with the Merdeka Award in 2012, in recognition of his outstanding contributions to the R&D of palm oil and the promotion of this crucial commodity.

Naturally, he is hailed as the beacon of the palm oil industry, which has deservingly earned him the “Father of the Malaysian Palm Oil Industry” accolade.

knowmypalmoil
Related Reports
EU’s palm-based biofuel ban: Does it breach WTO free trade rules?
a year ago
An inconvenient truth about a crucial ingredient in instant noodles
a year ago
Anti-palm oil sentiments: Biased or valid?
a year ago
Palm oil is more commonly used than you may know
a year ago