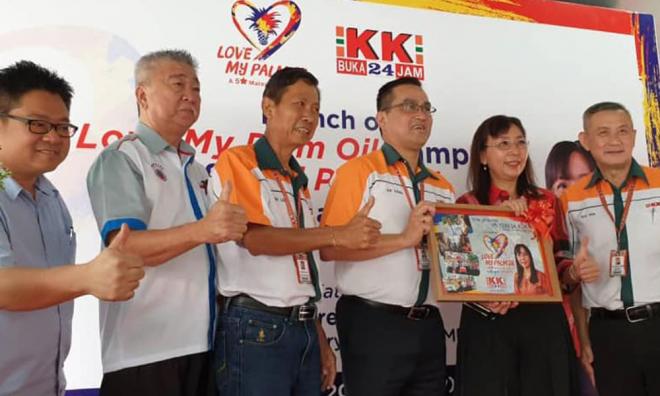 Red palm oil is rich in with tocotrienols (super Vitamin E) and carotenes (pro-Vitamin A). Tocotrienols protect against heart diseases, have cancer suppression properties, and are neuroprotective.

The Love MY Palm Oil campaign has piqued consumers' interest on the nutrient-dense red palm oil. However, finding it was quite a challenge.... But no longer.

Primary Industries Minister Teresa Kok said: "Since I've talked a lot about red palm oil on many occasions, some people have come to me and complained that they can’t find red palm oil in supermarkets or mini markets. Now they can buy from KK Super Mart!"

KK Super Mart on 25 August launched two brands of red palm oil -- Merris and Harvist -- for sale at its network of 408 outlets nationwide. At the same event, the company also launched its own Love MY Palm Oil campaign, which will run from 26 August to 20 September. Concurrently, it is running a Sayangi Malaysiaku campaign as well. Both campaigns are in conjunction with Merdeka and Malaysia Day.

As part of its Love MY Palm Oil campaign, KK Super Mart will be offering discounts on a selection of products, including the red palm oil.

KK Group of Companies founder and chairman Datuk Seri Dr KK Chai said the group fully supports the Primary Industries Ministry's Love MY Palm Oil campaign. Given KK Super Mart's wide network (408 outlets and fast-growing) and that is serves "more than 10 million customers per month", Chai believes it can be "the best partner in boosting the sales of palm oil products".

"In this aspect, we are not just looking at profitability or at selling more items. We want to educate Malaysians about the goodness of palm oil," he said, adding that the group can used its in-store LED screens, leaflets etc. to promote the benefits of palm oil, and palm oil products.

Chai said the group is eager to cooperate with all government initiatives that would benefit consumers. He cited for example KK Super Mart's participation in the Kedai Ekonomi Pengguna (fair price shops) or i-KeeP programme.

Kok believes that with KK Super Mart taking the lead in selling red palm oil, making it so much more accessible to consumers, other convenience stores and supermarkets will start putting red palm oil on their shelves too.

"We need more ambassadors for palm oil... people like Datuk KK Chai and Dr Ko Chun Sen," she exclaimed, adding with deprecating humour that the persuasive power of politicians is rather low; while doctors have the highest.

Kok shared that in response to people ridiculing her for encouraging the consumption of red palm oil, renowned heart surgeon Dr Ko Chun Sen, who is also a Perak State Assemblyman, drank a cup of it in front of the State Assembly just to show that not only is Malaysian red palm not harmful to one's heart, but that it contains vitamins that protect against heart disease and cancer. He convinced many that day and since, she said.