I am writing because of a grievous incident that took place on Monday, March 15 at about 3pm at Kepong Central KTM Station. My friends and I (six of us) were there to take the train to the Bank Negara station. 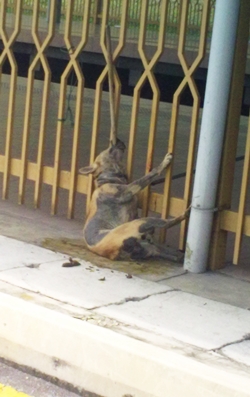 After parking our cars, we heard a dog howling, more like a painful cry. Then, we noticed a dog being tied to the grill (steel fence) of the KTM station. As we approached the dog, we stood aghast at the sight.

The stray dog's leg and neck was tied very tightly to the grill and a piece of wood had been shoved down inside its throat! The dog was bleeding and its feces were all around it. The string was attached to a pole in the KTM station.

Immediately, we confronted the KTM workers. They said that it was done by Kuala Lumpur City Hall workers because a minister was to be visiting the station next week. They failed to explain further.

At once, we called the SPCA and the Paws animal welfare society. The SPCA responded efficiently by informing us that an animal control officer would be there soon. We made a slight commotion in front of the KTM station but the KTM workers were not concerned at all.

After about an hour, as we were returning to the KTM Kepong Central Station, we received a call from the SPCA officer stating that the dog was now not tied up and was moving around. When we 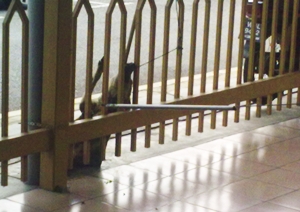 arrived, the dog was limping. The same KTM workers avoided us as we tried to confront them. A passer-by told us that the dog has been that way for quite some time.

The SPCA officer could not capture the dog as it walked away for quite a distance. He advised us to write to the media and to the SPCA as well.

Doenn’t our country’s animal rights support the idea that an animal has the right to live its life without being harmed and hurt by humans? We realize that people define the meaning of animal rights and abuse in different ways but aren’t the citizens of our country merciful?

This dog could have been just put to sleep if it had been harming the public or causing a nuisance. Why stick a wooden stick down its throat?