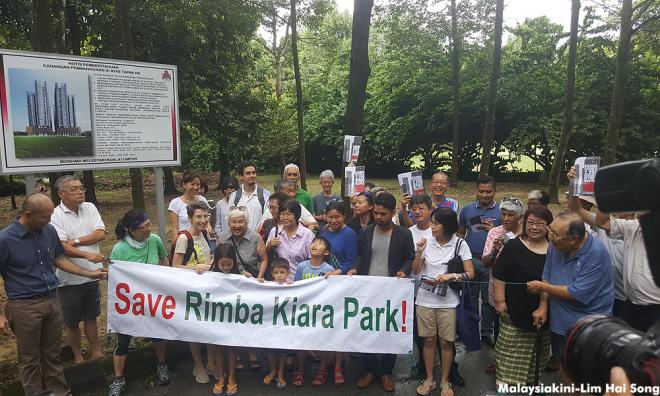 The rape of Taman Rimba Kiara

If you open the ‘Taman Rimba Bukit Kiara - Official Portal Visit Kuala Lumpur’ from the Internet, there is nothing there except a picture showing two leaves. That shows how pure and untouched the park is.

Suddenly, the Datuk Bandar Kuala Lumpur issued a notice on June 14, 2016, under Rule 5 informing he has received an application for planning permission for development of a 29-storey block of affordable housing (350 units) and eight blocks of serviced apartments ranging from 42 to 54 storeys (1,766 units). Owners within 200 metres from the boundary may make written objections within two weeks.

Allow me to list excerpts from the UN General Assembly held on Dec 4,1986 at its 97th plenary meeting adopting the Declaration on the Right to Development.

Inter alia, it proclaims the right to development is an inalienable human right by virtue of which every human person are entitled to participate in, contribute to, and enjoy economic, social, cultural and political development, in which all human rights and fundamental freedoms can be fully realised.

The human person is the central subject of development and should be the active participant and beneficiary of the right to development. States have a duty to formulate appropriate development policies that aim at the constant improvement of the well-being of the population and of all individuals, on the basis of their active, free and meaningful participation in development and in the fair distribution of the benefits resulting therefrom.

In 2011, the former federal territories and urban wellbeing minister wanted KL to be among the top 20 liveable cities come 2020 under the Economic Transformation Programme (ETP). It will be transformed into a vibrant city and economic hub with quality infrastructure, green spaces and a comprehensive transportation linkage and WiFi availability.

On Sept 23, 2014, in his address to the UN Climate Summit in New York, the prime minister reiterated his promise made at Copenhagen in 2009 to reduce Malaysia’s carbon emissions by 40 percent by 2020 and stated that we had achieved more than 33 percent reduction in emissions intensity. Unfortunately, we were never told where these emission reductions came from.

Not a ‘gentlemen’s’ way of fulfilling a promise

It is good news for the Bukit Kiara longhouse dwellers as they would get affordable housing promised by the government more than 30 years ago. But using a shortcut by using a developer to build it for them and in return, the right to develop the site, is not a ‘gentleman’s’ way of fulfilling a promise.

Now, 30 years after the UN Declaration, lots of murky water have flowed under the bridge and the respect for the declaration has left much to be desired. In the name of development, policy-makers bulldozed through, helped by promulgating new laws favouring developments.

Five years have passed and four more years to 2020, would the present federal territory minister help keep the promise of the former minister and checkmate plans made under the ETP?

Is DBKL going against what is planned in the KL Structure Plan 2020? No wonder it has not been gazetted and 2020 is just round the corner.

The above are all policy matters. If our politicians, decision makers and civil servants do not have respect on these policy issues, where do you think Malaysia will end up?

I am sure issues like population density, traffic jams, parking spaces, amenities, crime rates, etc will be discussed separately in the mainstream and social media.

Trust DBKL is aware of this UN Declaration on the Right to Development and the role to be played by the ‘human person’. Giving two weeks to submit an objection may not allow a well-presented argument to be submitted and this development is massive.

Further, is Rule 5 religiously followed or used on a case-by-case basis? If I am not mistaken there have beeen cases where development proceeded despite objections from TTDI residents.

If the above, is true, it calls for a review on the relevant parts of the bye-law or Act.

Lastly, if Taman Rimba Kiara is truly raped, what would the punishment be?