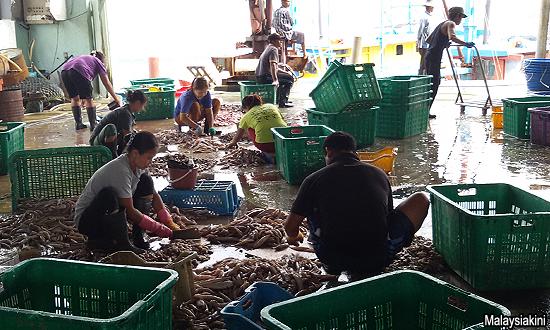 Sahabat Alam Malaysia (SAM) and the Consumers Association of Penang (CAP) object to the Kedah state government’s proposal to construct a fishery terminal in Tebengau near Kuala Kedah because it will adversely affect the environment and livelihoods of coastal fishers here.

The RM1.831 billion mega project known as the Kedah Integrated Fishery Terminal (KIFT) is reported to be fully funded by Lu Hai Feng Development Sdn Bhd from China. The project is proposed to begin next year after approval was obtained from the National Physical Planning Council last month.

The KIFT is planned to be built on state land covering 2,340 hectares. Out of this total, it is stated that 1,864 hectares will be used for navigation of vessels and the rest of the area will be reclaimed.

We believe that the development cost of this project is very high and wasteful, taking into consideration the waning fishing sector in the country which is currently affected by dwindling fishery resources and declining fish landing. In addition, why the need for another tuna port when the one in Batu Maung is not fully utilised?

Besides this, the project will also affect the livelihood of 2,000 coastal fishers in Kuala Kedah and the surrounding areas. Their fishing area which is Zone A will be reduced and there is possibility of the waters being polluted and fish breeding grounds will also be threatened.

We are disappointed with the state’s decision because the government is not taking into consideration the adverse impacts of the project on the marine environment and livelihood of the local coastal communities.

We hope that this mega project that will harm the environment, threaten fishery resources and subsequently livelihood of coastal fishers is cancelled immediately. The state must learn from the experience of other mega projects such as the disastrous Kerpan tiger-prawn farming which is now partly overgrown with weeds and is mostly barren.

Don’t repeat the mistake of Kerpan and Batu Maung.

SM MOHAMED IDRIS is president of the Consumers Association of Penang (CAP) and of Sahabat Alam Malaysia (SAM).