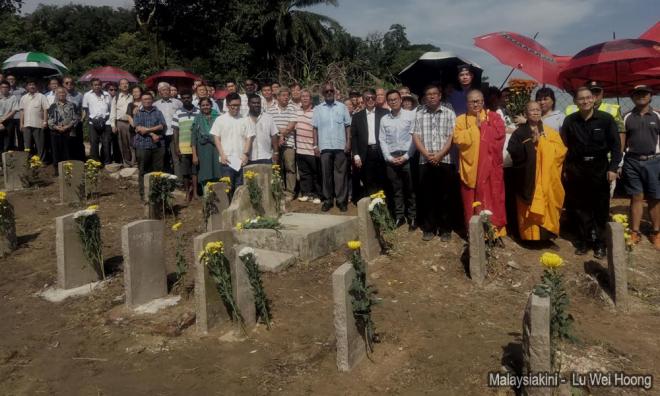 Let us acknowledge the pain and suffering of May 13 first

Forty-eight years have gone by. Many a tree would have grown and withered. However, the story of May 13, the stories of those buried in a mass grave, have hardly been told.

Rather, the world has abandoned them, not only the dead, but also the survivors. If not because of the controversy surrounding the mass grave from being converted into a car park, we do not know for how long more we can delude ourselves that we do not have a dark and violent past.

History has a strange way of returning to tell a hidden story, a story of monumental and conscious abandonment by those who have moral and political responsibility for the traumatic past.

Recently, the mass grave has undergone a facelift, a so called beautification project of tidying up the derelict ‘cemetery’. Ironically, it ‘cleanses’ tragic memories in the process. The wild undergrowth, the slanting and fallen tombstones ought to have been retained to preserve a sense of tragedy.

The mere sight of a mass grave in 21st century Malaysia is enough to disorientate us into asking how it was possible that mass killings akin to genocidal massacres like those of Nazi Germany, Rwanda or Pol Pot’s Cambodia had happened in this land of ours. Casting our sight into history, Homo sapiens of whatever ethnic origin are all capable of committing mass atrocities.

It is said that there are two things we cannot face directly - the sun and death. The sun shall blind our eyes, and the terror of death could overwhelm us emotionally.It is even more so for deaths with traumatic violent past. In a curious twist of fate, the natural terror of death in peoples have turned into an instrument to terrorise them that May 13 shall reoccur if existing hegemonic structure is disturbed.

Blaming the victims serves only to mask moral accountability. It reveals moral cowardice.

It is painful for the survivors and those lived at those violent past to recall the grim memories of horrific pain and suffering.Pain did not end on May 13. The cry of despair, the cry of helplessness, the cry of hopelessness are buried in the hearts of those who survived.

It is silenced suffering. Time does not heal. It only blunts off the excruciating pain. The pain and suffering of the survivors have not even been acknowledged by the authorities, not to say of their moral responsibility of what had happened.

The first step towards social justice and reconciliation is acknowledgement of the suffering of the victims, whoever they may be. Without empathy and compassion in our midst, our multi ethnic and multi religious society would be built on fragile ground, if not quicksand.This is a basic requisite of civilisational ethics.

When compassion is strong enough, no one will defend the indefensible except the guilty parties or repeat offenders; no one will sacrifice the lives of the others in the name of race and religion except the murderously perverted. Mass killings are indefensible no matter what the sacred reasons are.

As one reflects on the dark period of May 13, it is inevitable one has to confront the shadow within one’s culture and psychological makeup. The dark shadow of the perpetrators, the leaders, the followers, the bystanders, the willing executioners, all demand in depth intellectual understanding and exploration.

It takes great moral courage to accept great moral wrong, the wrongs done to the innocents. The first step is to acknowledge the pain and suffering of the survivors. When violence is used against the innocents, it not only dehumanises the victims, it dehumanises the perpetrators also. With empathy for the victims of May 13, we can then begin the journey of justice and reconciliation, thereby restoring human dignity to those who committed the wrong and those who are wronged.

This is our struggle for meaning, the meaning of a violent past. Unless and until we gaze into the dark shadow of our own psyche with all the associated ideological, social, cultural and historical factors without looking away, without scapegoating others, we will not be able to find out why our people are capable of mass atrocities, of why the minds and conscience of those involved had been hijacked.

May 13 is a great moral wrong. It must be seen and remembered for what it really is. The dark shadow within one’s psyche, culture and history must be embraced so as to have rebirth in greatness of a civilisation.

Wrong diagnosis shall lead to wrong and harmful prescription. We deserve to know the right causes of our violent past. The purpose is not to allocate blame but to construct a land of rainbow, where the greatness of each civilisation shall have its own rightful place and time, shall share the same space we are all thrown into without our choice.The synchronising use of spiritual resources of each civilisation ought to be sufficient to prevent a reoccurrence.

The first step and the last step is to develop a compassionate society that transcends self-centredness and to listen deeply the true meaning coming from the violent death of the innocents in the mass grave, from the voice of the voiceless of the living. Then there is hope in righting a great moral wrong.