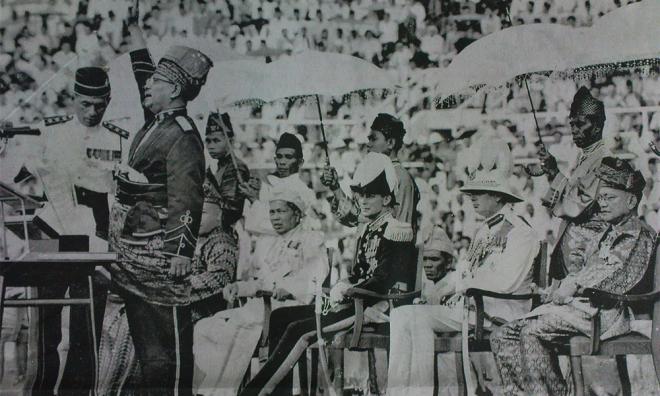 “When I was small...” (taken from the ‘First of May’ Bee Gees song) I grew up in a mixed neighbourhood in Seremban. There were Chinese, Malays and Indians and an occasional Sikh and Eurasian. The small neighborhood was mainly dominated by Chinese.

First thing I noted was that they were different from me, in terms of skin colour and how they communicated ie in Cantonese. Being a Malay, I asked my mum, why is the colour of my skin brown and not “yellow”. She replied, “It’s because I accidently put you in the oven and you got slightly roasted,” she joked.

I was fascinated by them and mixed freely and played the same childhood games they played. Kites, catching fighting spiders, fishing in the Lobak river, badminton, bochak (a game involving a small rubber ball which is to hit a person who takes the place of the hitter - equivalent to dodge ball), marbles, catching butterflies, swing from trees, champion, card games and a host of fun things.

We did not have smartphones or iPads or computers in the old days, it made life more down to earth and meaningful.

When my cad first got us a colour TV, we were treated to shows from both local fare and America and abroad. I again dreamed that I wanted to ‘white’ like the Europeans on TV, my favourite being a singer called David Cassidy in the TV series called the ‘Partridge Family’. I wanted long hair like him and looks like him and he became my idol in the good old days.

Again, if it was not for being wrongly placed in the oven when I was born, I would have been whiter (just joking). But reality settled in and growing up in a multiracial missionary school, I grew accustomed to my school mates, the schooling environment and friends which enriched me.

It was an English-medium school and one of the best, notwithstanding the strict teachers and brothers and the discipline which I grew accustomed to which moulded me into who I am today and paved my career path in life.

There were no colour or race issues then, it was a real melting pot. There was no segregation of any race due to religion or culture. Many of the Malay women did not use a tudung, only some of the old makcik. The Chinese coffee shop saw all races sitting down for coffee and roti kiap.

There were no worries of whether the utensils were ‘halal’ when Muslim friends visited the Chinese or Indians or Eurasians during the festivals. Everybody ate together. In the local food court we would see a Malay man selling satay beside a Chinese man selling pork mee or bak kut teh.

There were no problems about hot dog labels, Christian crosses, segregation of produce in supermarkets, shops and markets, there was no ‘halal’ this and ‘halal’ that, ‘Negara Ku’ was sung with real pride and sincerity. Everybody greeted everybody and there was no malice or hatred or fear or criticism or prejudice against any race, religion or color. Something like what is enjoyed by Sabah and Sarawak now.

A dangerous time for both Chinese and Malays

Then May 13 happened, I was in fact harboured and protected by the Chinese in their house in my kampung. I did not understand what was happening or why. It was just that it was a dangerous time for both Chinese and Malays.

When things subsided and returned to normalcy, I felt that something had changed in the air, but luckily due to the close knit relationship everybody enjoyed in the small kampung there were still the familiar smiling faces, the open arm greetings and friendly and sincere gestures which bonded us. There was still no deep divide to split us up, we were still Malaysians of different races and still stood together in our lives as we lived side by side.

Through the years, we saw many changes and developments, I cannot pin point what was it that caused a rift in our multiracial society but it is so prominent now that you can't ignore the elephant in the room. Whatever you read in the newspapers or is flashed as a scene showing the holding of hands and mingling is just something fabricated to look good (window dressing).

There are still true and genuine clusters of racial interaction and unity but on a whole, segregation and racial and religious elements have crept in to destroy the very fabric which was built up during the days of Tunku Abdul Rahman Putra Al-Haj ibni Almarhum Sultan Abdul Hamid Halim Shah II, Malaysia’s founding father, the architect of Malayan independence and the formation of Malaysia. My idol now and forever.

Many people blame the government, political parties, religious groups, the education system, and race- and religion-based politics for the sad state of affairs in regards to the deterioration of racial harmony, tolerance, understanding and cooperation among the various communities.

I believe the fault lies with all of us, all Malaysians who has allowed this to happen, who did not stand up or voice concerns, to stop the rot from happening, mostly all stood in the sidelines to watch it happening and didn’t do anything until it is too late.

Is it too late? What is the recipe to put things back again? I really don’t know. It was a long journey and as an observer in life, I wish it were different. I yearn for the “good old days” when things were much more simple and racial hatred was absent in our lives.

With all the new projects, buildings, infra-structure in which billions have been allocated, the missing component is human development and understanding. A fundamental and critical value that requires painstakingly constructive development and forging genuine unity of the people from all walks of life and race who are the real peacemakers.

We have to learn to walk again, to teach our children the right things from young, we have to put aside sensitivity and learn to extend our hands again to our neighbor and everyone. We have to accept that 1 person who is wrong does not reflect the opinion and feelings of all.

We have to root out extremism and God Willing the sultan in his wisdom and prudence will come down hard on those who blatantly disregard his kind reminder for national harmony and the importance of instilling in them respect towards other religions and races because Malaysia is a multicultural and multi-religious country.

By interjecting just once against any wrongdoers, he will set the wheels in motion for others to toe the line and not to damage the fabric of unity as many feel they are ‘untouchable’ now and can do or say anything they want. They are dangerous to our national unity.

Anything or anybody which is detrimental to this objective must be nipped in the bud and when you really walk the talk, people will respect not the race but the person.

Racism is something you learn and not something you are born with. Let’s stop believing that our differences make us superior or inferior to one another.

To quote a saying, “We were all humans until race disconnected us, religion separated us, politics divided us, and wealth classified us.”

I reminisce on the good old days and the fun I had with all my friends of different races, religions and colors, I pray for a better united Malaysia and that it does not forget or change our Federal Constitution of 1957 and that we learn to accept ourselves as Malaysians other than a particular race or colour.

(From the guy who got roasted in the oven when he was a baby.)