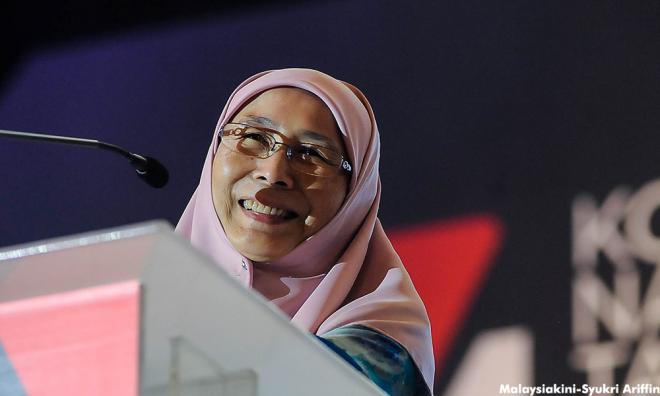 The single major mistake that PKR and other opposition leaders and parties have made is declaring Opposition Leader and PKR president Dr Wan Azizah Wan Ismail as their candidate for interim prime minister should they win the coming general election.

There is no need to declare Wan Azizah as Pakatan Harapan’s candidate for interim prime minster. She should be declared, Harapan’s choice for prime minister.

Malaysians seem to have a narrow perspective when it comes to politics. They decry the state of politics in our country as dirty. They yearn for change but yet they seem to still want the same things when it comes to what a leader of a country (or in this case prime minister) should be.

The prime minister of Malaysia should be a skilled orator, he or she should look and talk tough, speak with a loud voice, be rhetorical, combative, somewhat sarcastic and etc, etc.

Conversely, Many say Wan Azizah is not fit to be prime minister.

She’s soft, she doesn’t seem tough, she looks like as if she’s being dictated, we think she’s a puppet (one might have legitimate reasons to think so), she isn’t a skilled orator, she cries, she is a reluctant politician (of course, she is), she’s scripted and therefore she’s a substandard leader who cannot be prime minister.

Also, some misogynists might think because she’s a grandma and a woman she cannot be prime minister.

I beg to differ.

Malaysians thirst for change. We can have change if Harapan wins the general election and even greater change will happen if Wan Azizah is sworn in as prime minister, even if her term will be remarkably short.

I say this because Wan Azizah will bring about a different aura when it comes to politics and governance, as she is not an ordinary politician that is abhorrent to us.

If one’s concern is that Wan Azizah speaks with a soft voice and doesn’t present herself as a ‘tough’ politician making her a bad choice as leader, that’s just a political stereotype.

Politics and leadership shouldn’t really be about how loud one is or one's tone of voice, it should be about the execution of the job. It should be how a leader unites the people and make the country work.

The Chancellor of Germany, Angela Merkel, doesn’t speak with a loud voice, she is nowhere close to being a skilled orator but, she isn’t dubbed as the Queen of Europe for nothing. Sonia Gandhi, who is not even Indian by ancestry, led the Indian National Congress to power in 2004 despite the fact that she wasn’t a skilled or passionate orator.

Malaysians needs to stop looking at perceptions but instead look at what the individual has got to offer for the country.

Yes, Wan Azizah may sound weak in Parliament as Opposition Leader as the voices of some impudent BN MPs may drown out hers, but Wan Azizah has always got her message across even if she has to read from a well-prepared text.

Another world leader who faced such a situation such as Manmohan Singh of India who also wasn’t a skilled orator or a combative politician but yet he led India well enough to have his alliance re-elected.

However in spite of his oratory shortcomings, whenever Manmohan Singh opened his mouth on the world stage to read his text in a soft voice, the world listened to what he had to say unequivocally.

Wan Azizah not being a skilled orator should not be a deterrent to her becoming prime minister.

That should never be a liability for any individual who wants to lead as expressing feelings is what that makes a person genuine and trustworthy.

Malaysia doesn’t necessarily need a brash politician with a loud demeanor. What Malaysia needs is a leader who is willing to show undivided genuine compassion to the people.

Malaysia needs a leader who can feel and empathize with the hardship faced by the people. Wan Azizah knows what personal loss and pain is.

Her ability in showing compassion to the people is proven by the fact that without fail, she very frequently returns to her parliamentary constituency in Permatang Pauh and state constituency in Kajang showing that she’s not just using her seats as a stage to have a public voice but she is indeed there to be a people’s representative.

If you buy the ludicrous allegation that some people have made which is Wan Azizah as prime minister would be taking orders by the DAP, think again. Malaysians need not fear that she would be anybody's puppet.

As Leader of the Opposition, Wan Azizah has shown that although she is perceived as weak, she can stand her ground.

For instance, she differed with the DAP when it came to the dialogue with PAS after the end of Pakatan Rakyat.

Even so, it would be a miscalculation to think that the big guns of PKR such as Azmin Ali, Rafizi Ramli, Saifuddin Nasution, Zuraida Kamaruddin, Tian Chua, Sivarasa Rasiah and so on would allow their party president to be pushed around by their coalition partner.

Does all this prove that Wan Azizah is a capable leader?

She has been in our political spotlight for almost two decades now.

She has held Parti Keadilan Rakyat united until today, even though some form of factionalism exists in the party.

And she isn't completely devoid of the "usual" traits of a politician which many seek.

She’s reticent, and that gives her an edge on many issues as she cannot be easily dragged and trapped on a particular issue.

Her ambiguity when it comes to answering heated questions makes her a leader who knows about the political ramifications of making a hasty public stance on issues that divide people.

For instance, when she was asked about hudud on Al Jazeera. Whatever your opinion on that, she skirted around that question remarkably well.

Hudud is not her priority, she implied that she has no interest to implement it, without disenfranchising the supporters of that law. She knows how to play politician when time requires her to do so.

She has made crucial decisions robustly when required to. For example, setting up Harapan immediately after Pakatan Rakyat disintegrated, telling off PAS when it was necessary and also, following political conscience which was telling PKR representatives to pull out of the Kelantan state government and the list goes on.

Wan Azizah is a successful individual in her own right. She was a top medical student at the Royal College of Surgeons in Ireland during her younger days, she had a career as a doctor and she has built up a lasting political legacy for herself.

We do not only want to improve the economy and financial woes of this country. Instead, we also want to restore our human rights, our free press, our independent judiciary, electoral fairness, free speech and other social and humanity issues.

We do not need to take advice from a troublemakers and party hoppers (the late Karpal Singh had said that this man cannot be trusted) in the Opposition who think that only a nonagenarian who bears responsibility in eradicating our human rights, free press, independent judiciary and etc. in exchange for economic development can correct the situation here.

A man who created such problems cannot and should not be allowed to try and ‘cure’ them. We give him credit for putting our nation on the map, but not for all the things we lost and injustices we faced because of him.

Do not call Wan Azizah your candidate for interim prime minister. Let’s not sing to the tune of the detractors which is: we are playing with the post of prime minister.