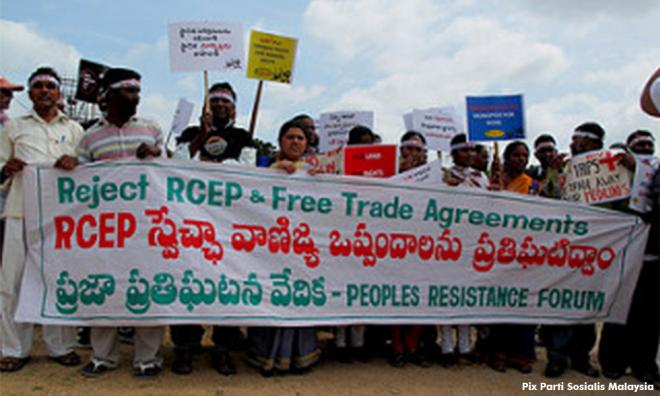 Hasn’t Putrajaya learned anything from the TPPA?

The Regional Comprehensive Economic Partnership (RCEP) trade deal is another mega-trade deal that Malaysia is keenly negotiating and trying to conclude.

Formal negotiations began in 2012, and India is currently hosting the 19th round of talks. The continued negotiations were discussed this week in Hyderabad, India till 28 July, 2017.

This is yet another secretive trade deal done behind closed doors, but is expected to cause similarly adverse effects to our economy and the rakyat.

Parti Sosialis Malaysia (PSM) questions why the Ministry of International Trade and Industry (MITI) and Putrajaya have not learned from the controversial Trans-Pacific Partnership Agreement (TPPA) led by the US. The TPPA fell flat after US President Donald Trump pulled out of the agreement.

The RCEP is believed to contain similar contentious issues as the TPPA that will severely affect our social economy. As in the TPPA trade deal, the RCEP is also believed to be negotiating on:

Thus it is clear that the officials in MITI and Putrajaya have not learned their lessons from the criticisms and warnings given by various people’s movements and civil society against the TPPA when it was negotiated from 2010 to 2016.

MITI officials seemed to have sold their souls to corporate business interests, trying their level best to make the RCEP happen as it will fulfil the interests of the corporations in view of the TPPA’s demise.

Minister for International Trade and Industry Mustapa Mohamed during the TPPA negotiations proudly claimed that Malaysia was one of the very few negotiating countries which had stakeholders, CSO consultations and even a presentation in Parliament before the trade deal was signed. But in the case of the RCEP, he has remained completely silent! The trade deal has been negotiated in total secrecy since 2012.

Why have there been no town hall meetings and public discussions on the RCEP, compared to what was done for the TPPA?

Will Mustapa commit to present in Parliament for debate, as he did for the TPPA?

It has been reported that stakeholder meetings held in Hyderabad during this round of negotiations have also proven to be a sham.

In a statement by The People’s Resistance Forum against FTAs and RCEP, which represents a wide range of people’s groups and mass movements from across India that stands for development justice, they said: “We are shocked that its organizers have not taken the basic minimum steps to do a meaningful consultation.

“There has been no official announcement, no attempt to invite the multitude of stakeholders and no dissemination of the chapters of the agreement and the negotiating text well in advance”.

It was also exposed that while whole-day consultations were being held with businesses like the Confederation of Indian Industry and East Asian Business Council on July 25, 2017, genuine sincere discussions with the majority of the people represented by farmers, women, patient and workers groups were missing.

PSM condemns the RCEP trade deal which is being kept a secret from the rakyat. We call on the government of Malaysia to immediately come out into the open and declare the issues that are being negotiated. Where is the cost-benefit analysis and the human rights impact assessment report on the RCEP? We call the government to halt all negotiating processes till the above matters are dealt with.

No to RCEP! No more trading away our lives!