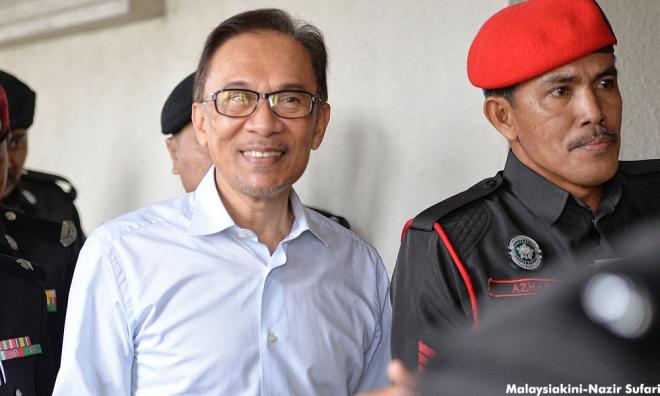 Today marks 1,000 days of shame for Prime Minister Najib Razak’s administration. Anwar should not have spent a single day in prison and the government has completely ignored UN calls for his release. Anwar must be freed now.

In an opinion adopted on Sept 1, 2015, the UN Working Group on Arbitrary Detention (WGAD) deemed Anwar’s detention arbitrary and called for his immediate release and the reinstatement of his political rights.

FIDH and Suaram also reiterate their call for Malaysian authorities to guarantee Anwar’s rights, including his rights to receive adequate medical care in accordance with relevant international standards.

Anwar is suffering from continuous pain to his right shoulder, which was worsened by a recent car accident that took place during his transfer from Kuala Lumpur General Hospital (KLHG) to Sungai Buloh prison in late September 2017. At KLGH, Anwar received treatment for high blood pressure.

On Oct 16, 2017, during a prison visit by his family members, Anwar complained of not being able to move his right shoulder and perform basic functions like writing without suffering acute pain. Orthopedic specialists recommended that Anwar undergo a shoulder replacement surgery due to the tear in his shoulder rotator cuff.

However, the prison’s medical facility in ill-equipped to perform such surgery and prison authorities have denied Anwar’s requests to receive surgery outside of the prison.

Rule 24 of the UN Standard Minimum Rules for the Treatment of Prisoners states that prisoners “should enjoy the same standards of health care that are available in the community.”

Rule 27 stipulates that “prisons shall ensure prompt access to medical attention in urgent cases” and that “prisoners who require specialized treatment or surgery shall be transferred to specialised institutions or to civil hospitals.”

“The Malaysian authorities’ ongoing denial of Anwar’s right to receive adequate medical treatment while he is being arbitrarily detained is unconscionable. Prisoners have rights and Anwar should not be subjected to physical suffering that may amount to torture or ill-treatment.

Anwar Ibrahim has been detained since Feb 10, 2015, when the Federal Court in Putrajaya upheld the Court of Appeals decision to convict Anwar on charges of sodomy (Article 377 of the Criminal Code) and sentenced him to five years in prison. FIDH observed both the Court of Appeal and the Federal Court's hearings for Anwar and found that the proceedings failed to meet international standards for fair trials.

On 18 January 2017, the Court of Appeal ruled that Anwar has standing to petition the Federal Court to determine if he has the constitutional right to challenge the Pardons Board’s decision to reject his request for clemency. A date for the case to be heard in the Federal Court has not been set.

Anwar’s family filed a petition for a royal pardon to the Yang di-Pertuan Agong on Feb 24, 2015. The request was rejected by the Pardons Board, which advises the Agong on candidates for clemency, on March 16, 2015. On June 24, 2015, Anwar and his family filed a legal challenge against the Pardons Board’s decision. On July 15, 2016, the Kuala Lumpur High Court dismissed Anwar’s challenge.

If his bid to obtain clemency fails, Anwar is expected to be released by mid-2018, as a result of the Malaysian practice to grant a one-third reduction of jail terms to prisoners with good behavior. However, the conviction renders him ineligible to stand as a candidate in the next general election that must be held by 2018.