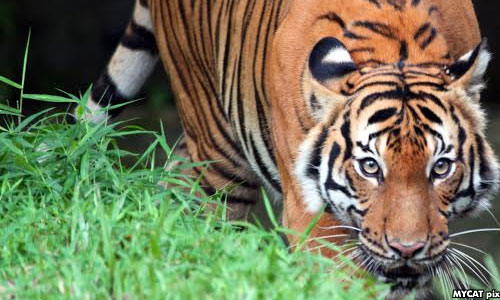 Reforestation efforts are needed for our tigers

The corridor is the last linkage between Malaysia’s largest tiger landscapes - the main range and greater Taman Negara. The trees were planted at Puncak Botak, a clear-felled patch of forest on a hilltop discovered by MyCat volunteers in April last year.

Straddling over the corridor are the three eco-viaducts of the Central Spine Road or the Kuala Krai-Kuala Pilah Highway. Despite government foresight in building the green infrastructure, the forest surrounding the viaducts have become sparse and are unable to support wildlife due to poaching and illegal forest clearing.

Puncak Botak is located adjacent to the world’s longest viaduct built for wild tigers at the center of the corridor. However, the valley between Puncak Botak and Sungai Yu contains illegal rubber plantations, some of which are mature enough for latex tapping.

Since 2010, MyCat has coordinated anti-poaching and anti-deforestation surveillance walks called Citizen Action for Tigers (CAT) Walks in the corridor. CAT Walks are conducted by citizen conservationists with the support from the Department of Wildlife and National Parks.

In July 2016, MyCat, in collaboration with the district and land office launched a reforestation project with the support from the Pahang royal family. The collective effort between the government and the public sends a strong message that saving the critically endangered Malayan tiger and its forest requires everyone to work together.

“It is extremely encouraging to note that the Lipis forestry and land offices took the initiative to reforest Puncak Botak. With support from the government and members of the public, we are determined to restore the tiger population and forest at the Sungai Yu corridor,” said Kae Kawanishi, biologist and MyCat general manager.

“Illegal felling and mining continue to threaten the corridor. We support the Pahang state’s decision to eventually gazette Puncak Botak as a forest reserve and hope that this will come into effect sooner than later,” says Suzalinur Manja Bidin, CAT Programme Manager.

While hundreds of citizen conservationists continue to patrol the corridor to deter poaching and deforestation, MyCat envisions to restore 52ha of the degraded Sungai Yu watershed for implementation of the National Tiger Conservation Action Plan and Central Forest Spine master plan.

MyCat’s citizen conservation programmes at Sungai Yu receives financial support from the National Conservation Trust Fund, the US Fish and Wildlife Service, and Wildlife Reserves of Singapore. The saplings planted were supplied by the forestry office.