LETTER | I refer to the letter Temple's demolition should not be politicised.

There is more to temple preservation than mere legal ownership. I am sorry to state that demolition of places of worship in Malaysia simply cannot be defended by strictly interpreting the law.

There is more to safeguarding places of worship rather than simply hiding behind the legality of the ownership question. Ownership is an important consideration, but if places of worship have been on properties for years, isn't there another way to look at the problem in terms of solving them?

The writer said that the demolition of the Sri Sivaskathi Sri Sinna Karuppar temple in Seri Alam, Masai, Johor on Jan 11 should be interpreted from a rational perspective. There is no need to get overly emotional about what happened.

Apart from his name, I am not sure about the details of the writer and whether he is employed by the Johor government or whether he in in the service of the landowner.

Whatever the case, Ahmad Solehin seems very sympathetic to both the Johor sgovernment and the landowner. He argued that the temple demolition matter should not have been politicised since it was based on a Johor Bahru High Court decision taken in July 2016.

Only July 23, 2016, the court declared that the temple was situated on a private land, ordered the management of the temple to take the necessary measures to demolish the structures and hand over the land to the owner.

In the event the management failed, then the owner had the right to remove the structures on the land and an injunction will be issued to stop the devotees or any others from coming into the land. Following the court order, it seems, that efforts by the Johor government, the landowner and other concerned parties to peacefully resolve the matter failed.

And finally he said that although the demolition of the temple was done in accordance with the law, some irresponsible parties including the opposition have made highly sensitive remarks about a religious matter.

He hoped that Hindus could be more rational, open and not jump to conclusions on the matter of the temple's demolition. He said that they should not be influenced by the 'hate politics' of those who have political intentions to embarrass the Johor government.

I am sorry that the writer has given a very strictly legal interpretation to the matter of the temple's demolition. However, such an interpretation seems to absolve both the Johor government and the landowner of any wrongdoing.

In fact, the temple was built even before our political independence in 1957 and chances are high that the former estate workers of the plantation built it. Just because ownership of the land changed in recent years, structures on the land do not become 'illegal' overnight.

Unfortunately, the courts in the country have failed to take a broad view on the question of legality. Since the majority of court decisions have been in favour of those who own properties, little allowance has been given to those who have lived on these properties or have put up structures like places of worship. 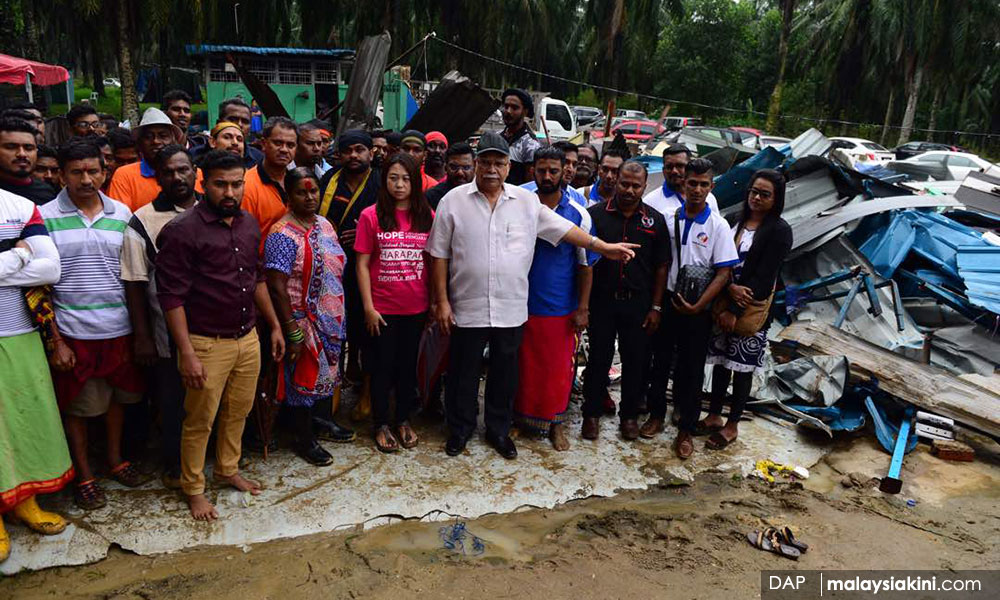 The minute ownership of the properties change, these structures that have been there for years become 'illegal' overnight.

The Johor Bahru High Court might have made the 'right' legal decision in one stroke of the pen, but it failed to provide justice to plantation workers and their families who built the temple long before independence.

In fact, there are hundreds and thousands of Hindu temples that were built in the plantations during the colonial period. However, rapid urbanisation and commercialisation have meant, among other things, the sale of land previously belonged to the plantation companies.

Once these plantations lands were sold to private owners, then there is real danger for temples because they become 'illegal' and prone to demolition.

Yes, state governments cannot interfere with the court decision. However, there is nothing that prevents state governments from providing alternative land to temples that might face the dim prospect of eviction or demolition.

It is lie to say that the Johor government offered an alternative plot of land to the temple management but was rejected by its committee.

Since I was there on Jan 13, I can confirm that no alternative land was offered by the Johor government to the temple committee before the temple structures were demolished. I am not sure where the writer got his information from.

As I have said earlier, the problem in many of the states other than Penang or Selangor, is that there are no administrative provisions under the local governments for the setting aside of land for non-Muslim places of worship.

The absence of this provision coupled with the lack of effective non-Muslim representation has prevented state governments in the BN states from fairly and effectively discharging their responsibility towards non-Muslims.

Sorry, there is nothing to be politicised about this temple's demolition in Johor. The very act of demolition carries with it huge political and social implications.

While the writer asks Hindus in Johor to be rational and open, would he expect the same thing if other religious places of worship were demolished?

Knowing how sensitive religious matters are, it is unthinking to ask Hindus not to be too sensitive about the temple that was torn down in Johor recently.
Temple demolitions are not rational acts even though they are ordered by the courts.

Whether a temple is illegal or not, the mere act of demolition is something difficult for the Hindu community to accept. What do you expect them to do? Praise the court decision and the judge who ordered the demolition?

As I have pointed earlier, I am not still convinced whether the landowner or his agent followed the correct court order in going for demolition. Yes, the court gave the order in July 2016, but the enforcement needs a bailiff order within a stipulated time.

Was the bailiff order for eviction or demolition or both? Can the landowner provide clarification on this matter? I hope that lawyers acting for the temple management take up this matter, even if the saving the temple or its structures is merely academic now.

Finally, I am not sure why the landowner or his agent needed the service of more than 300 police and FRU personnel for the purpose of the demolition.

Let me ask the chief police officer of Johor whether he was aware that his men in blue were not innocent bystanders at the temple site but actually engaged in the demolition exercise in favour the landowner.

During my visit last Saturday, I was informed by those gathered that the police were seen pushing and dragging old women. I would like to get the response of the CPO as soon as possible.

Read more from this author :
P Ramasamy
Read more like this :
#templedemolition
View Comments
ADS
Most Read
Most Commented
Most Recent
ADS