LETTER | Publicity on zoos has once again resurfaced and this time the focus is on the Kemaman Zoo in Terengganu. Allegedly disgruntled Kemaman zoo employees shared photographs of animals in tiny cages and an elephant chained outside in the rain with animal welfare activists.

The zoo pictures shown in social media speak volumes of the way in which animals are kept. Despite their professed concern for animals, zoos can more accurately be described as collections of interesting animals than as actual havens or homes. Even under the best circumstances at the best zoos, captivity cannot replicate wild animals’ habitats.

The wild may not be an idyllic place free from problems, but animals have evolved over thousands of years, adapting to live in certain types of natural environments. Placing an animal in surroundings that are unsuitable for the species can cause stress and behavioural problems.

Sahabat Alam Malaysia (SAM) believes its best not to keep wild animals at all if their needs cannot be met, particularly if the animal is there for entertainment.

Presenting animals to zoo visitors as living trophies teaches children that animals can be manipulated in order to fulfil their own curiosity. Zoos teach people that humans have the right to enslave animals, and reinforces the notion that animals have no other purpose than for our benefit. 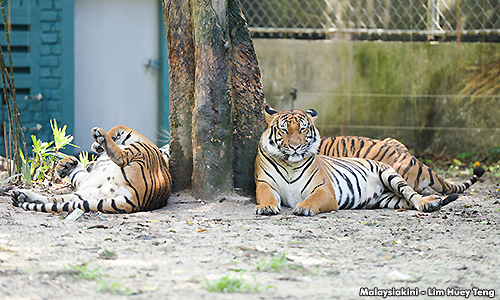 The disturbed and often bizarre behaviour of animals in zoos provides further evidence that holding animals in captivity is wrong. Zoos fail to recognise that animals have their own needs to be met, for their own purposes.

Zoo officials should stop kidding themselves about the tremendous educational value of showing an animal behind a glass wall or in metal cages. It does not matter what is on display – people treat the exhibits as wallpaper. The alleged ‘educational’ role of zoos needs to be challenged if society is to have respect for animals.

What is unquestionable is that the majority of Malaysia’s zoos are run for little more than profit or entertainment, and the conditions within most are rarely above mediocre.

SAM urges the Natural Resource and Environment Ministry and the Wildlife Department to cease the granting of permits for the opening of new zoos. Instead, they should focus on sub-standard zoos to ensure they meet exacting standards of housing, husbandry, welfare, and health for all their inhabitants.