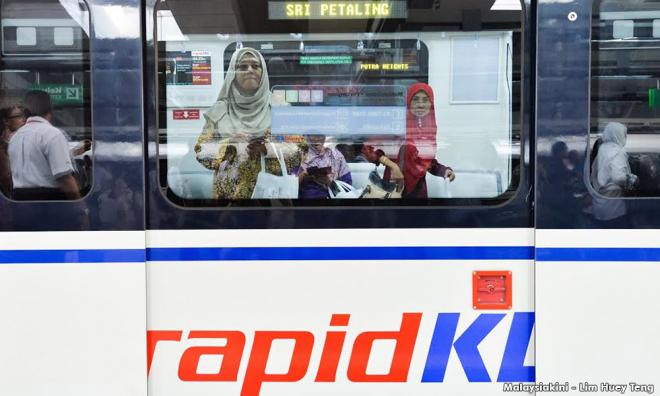 LETTER | Now that Spad (the Land Public Transport Commission) has been abolished, many have questioned the need for it and its functions. The Klang Valley public transport system is still plagued with many flaws and issues that Spad failed to fix.

Here are some of the many flaws I’ve noticed and some ideas on how to fix the issues that Klang Valley public transportation users face.

1. Fares are high. A ride on the LRT between Kinrara BK5 station to Asia Jaya station costs RM5.10 per trip, and that’s already the discounted price if one uses Touch ’n’ Go. A return trip would cost about RM10. If one uses the LRT for 23 days a month, that would cost about RM230 per month. This fare doesn’t include the standard RM4 for parking charges at LRT stations or even feeder bus fares. All in, including parking, monthly travel costs can come up to an average of RM350.

In Toronto, Canada, one pays C$146 (RM448) for a monthly unlimited pass. The minimum wage in Toronto is C$13 (RM40) per hour in contrast with Malaysia’s minimum wage which is about RM5 per hour, I believe. That shows that our public transport is really expensive on a dollar-to-dollar basis.

My suggestion is to introduce a single fare system also known as a transfer system in some countries. For example, for a distance under a 10km zone, a single full fare of RM2 should be charged. This single fare includes feeder bus service and the train ride. Give commuters a grace period of one hour to be eligible for a single fare trip.

Operators can adjust the fares according to zones and with Touch ’n’ Go technology, it should be easy to implement. A monthly unlimited pass should also be introduced at below RM150.

2. Our accessibility to train stations is mostly dangerous. I got off the newly-opened MRT Semantan station and was shocked there was no dedicated zebra crossing for pedestrians. Not even signboards to warn drivers. Even crossing 50m to the opposite side is dangerous. What’s more ironic is MRT’s corporate headquarters is located opposite the station.

When there are walkways, they can be in bad shape. Take the one at the Asia Jaya LRT station: the roof looks like it’s going to fall off anytime; tiles are broken; there’s no pedestrian traffic lights or signboards to alert drivers that people are crossing. Even a short 50m walk to a station can be dangerous.

Some stations have no proper walkways to places of interest within a 500m radius.

I’ve made complaints but I get the same frustrating answer: no one wants to take responsibility. Local councils will say it’s under RapidKL or the JKR (Public Works Department). This is where Spad was supposed to come in, to be the mediator.

3. Connect the “missing links”. For example, if a person takes the LRT from Kinrara to Subang Jaya, the whole journey takes more than one hour. Driving takes 15 minutes.

Also, the authorities should consider extending the BRT (Bus Rapid Transit) Sunway line to Puchong for the benefit of the growing Puchong population.

My suggestion is to build a new BRT station near the LRT Pusat Bandar Puchong that offers a faster connection between Puchong and Subang/ Sunway. The massive daily crawl on the LDP highway proves that despite the LRT extension, hundreds still prefer to drive as the commute time is still faster despite the crawl.

In Petaling Jaya, there is no interchange station between the LRT and MRT services. For example, if I take the LRT from Asia Jaya to go to MRT Bandar Utama, I need to take the LRT all the way to KL Sentral and switch to the MRT line. The journey takes about 35 minutes. By driving, it takes me less than 10 minutes as the distance is a mere 7km. This is what results from poor planning.

There’s actually an easy solution to this problem - introduce an express shuttle bus service to connect this missing link.

Take the Asia Jaya LRT station and the MRT Phileo Damansara station as the two connecting stations. The express shuttle bus service should be set at a frequency of five minutes, similar to a train. This way, commuters can change between the LRT and MRT seamlessly in Petaling Jaya rather than travelling all the way to KL to make the change.

4. Our current feeder bus service is horrible. I suggest RapidKL use the 7km radius/10 minutes formula where feeder buses must cover a radius of 7km around any train station at a frequency of 10 minutes.

This is how developed cities plan first and last mile connectivity. There’s also a need to include designated stops and next stop announcements on buses. It’s hard to believe that in 2018 we still haven’t got this right.

I also hope the government will look into raising wages for bus drivers as I understand that RapidKL is struggling with manpower issues. If Singapore allows foreigners to be bus drivers, I don’t see why we can’t if proper training is provided.

We need to fix all the current flaws right away. We haven’t even maximised the use of technology, such as incorporating Google Maps or having a mobile app with a live tracking feature.

The recent liveability ranking by ECA International (which provides data on quality of life for expatriates worldwide) ranked KL at a shockingly low 126 among Asian cities (Singapore is No. 1).

Public transport is a symbol of a nation’s progress so it’s crucial for the government to get the Klang Valley public transport system right first before focusing on other cities.

I hope the government will also consider my suggestion to set up a special task force to look into and fix all the current flaws with our urban public transport systems. There’s still a need to have a dedicated team of experts to fix the issues. I’ll be more than happy to contribute more ideas and suggestions in my capacity as a public transport user to ensure Malaysians can enjoy world-class services.