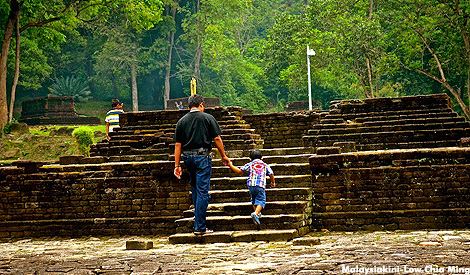 Of pendatangs, playgrounds and swing sets

LETTER | I’ve always equated the pendatang issue with how kids in a playground argue over a swing set, saying “we were here first” and hogging the set out of spite when others just want to have the same amount of fun.

Well, in Malaysia today the metaphorical playground is packed with kids, and we really need to learn to share.

To simplify my thoughts, anyone can call another a pendatang, depending on how far back you want to go back in time.

If we go back to the purges of Sukarno and later Suharto, we will find Indonesian pendatangs.

If we go further back, we will find that Malacca was started by a murderous pendatang who tried to take over Singapore and failed.

If we go back even further to those who believe in evolution, we are all African pendatangs.

Or if you believe the Abrahamic religions, we are all heavenly pendatangs cast out because our ancestors got conned into eating forbidden fruit by the devil who took the form of a snake.

Thus, do we go all the way back to Adam or do we cherry-pick parts of history to fit our narrative of ownership over land?

Because if we wish to look at history and claim a land simply because we were here first, using religion, then what differentiates us from the Zionists of Israel?

But at the same time, if we lay claim to a land without looking at who lives there currently, and who initially set it up, just wanting it for ourselves by demanding a share and just ousting the population using force, using economic power and even laws biased for the rich, then what differentiates us from the Zionists of Israel?

So where do we stand on this is rather precarious. It’s an age-old question that needs to be answered with tact and consideration.

But most of all, there needs to be acceptance of current conditions and reconciliation, towards a unified people beyond racial, religious and economic lenses.

That would be as close to utopia as you can get.

So, what should the government do? They’ve tried racial affirmative action time and again to no avail, and saw staggered growth.

What was once a privilege of using the swing set, suddenly became the right to claim it for eternity.

This was particularly because those benefiting from the affirmative action with a racial tint, forgot to look at those who hoard wealth, and also forgot about others’ need for equal opportunities.

In other words, the kid with his personal swing set at home comes with a gang to claim the public playground swing set for his friends, rather than inviting his friends home to share his home swing set.

So perhaps the government being the metaphorical parent should consider more swing sets and teach people to share, rather than expect the kids to sort it out on their own.