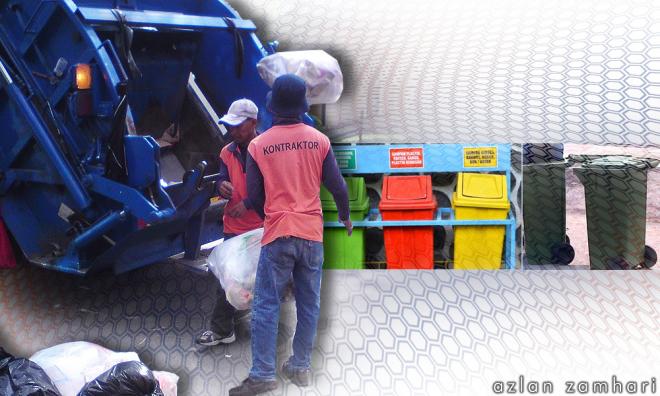 However, according to Britannica, improper disposal of municipal solid waste can create unsanitary conditions, which could lead to pollution of the environment and to outbreaks of vector-borne diseases spread by rodents and insects.

Tonnes of municipal solid waste including recyclables which comes from homes and commercial is disposed at various landfill sites. Furthermore, this type of dumping of waste materials forces biodegradable materials to rot and decompose under improper, unhygienic and uncontrolled conditions.

Besides that, it also spoils the aesthetic value of the area.

Referring to Solid Waste Management Lab 2015 Report, it is estimated that 49,670 tonnes per day of waste is expected to be generated by Malaysians in the year 2020. Therefore, a proper municipal solid waste management must be implemented in order to reduce the amount of solid waste in landfills.

There are five stages in the activity chain of waste management which are generation, collection, transport, treatment and disposal. The key factor is tproper municipal solid waste management at the generation stage which is waste separation at source.

There are few strong reasons why we should separate solid waste at source. First of all, it is to prevent disposal of recyclable materials such as paper, glass and aluminium cans. Secondly, it is to reduce the amount of solid waste sent to landfills.

Only residual waste such as food items and soiled/wet materials like used diapers and tissues should be sent to landfills. Thirdly, it is to reduce the country’s allocation for solid waste disposal.

Last but not least, it is an offence under the Solid Waste and Public Cleansing Management Act 2007 (Act 672) to not separate solid waste.

According to the Ministry of Urban Well-being, Housing and Local Government, there are four categories of wastes that need to be separated accordingly which are:

2. Plastic – bottles, plastic bags, and anything else made of plastic (this can include plastic toys and plastic and polystyrene food containers – rinsed first).

4. Non-recyclables - residual waste such as food items and soiled/wet materials like used diapers and tissues. Only these will be sent to landfills.

Solid wastes like e-waste and hazardous wastes need to be prevented from being dumped into the landfills because when they are released to the environment, they may cause biological and physio-chemical problems to the environment and may affect or alter the productivity of the soil in that particular area.

The toxic materials released from them also will eventually seep into the soil and pollute the groundwater. Apart from that, during the disposal stage, the mixing up of hazardous wastes, plastics, papers and other scraps that need to be burned which will produce dioxins and gases. These toxic gases have a potential of causing various diseases including cancer.

Therefore, in conjunction to World Habitat Day 2018 which is today and has its theme “Municipal Solid Waste Management”, it is the time for us to make a change in our solid waste management at homes by separating the waste at source.

And it is also time for the government to enforce the Solid Waste and Public Cleansing Management Act 2007 (Act 672), especially for commercials and industries. The local authorities also need to play their role more effectively in supporting this campaign.

Solid waste management should be embraced by each and every household including the business owners across the world.

The writer is attached with the Malaysia Water Forum, a consumer rights NGO advocating for safe and clean water supply and also sanitation services for living.