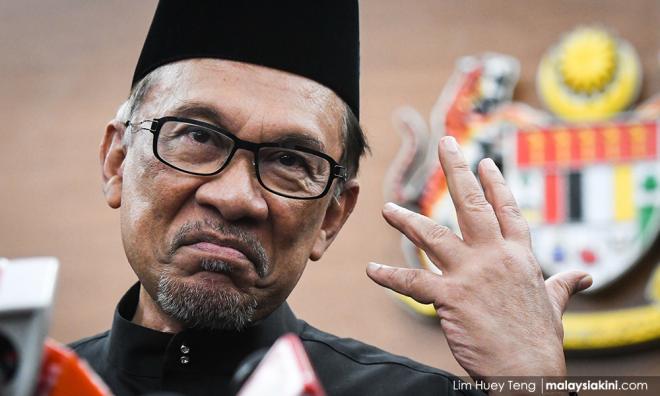 Anwar Ibrahim’s return and hopes on him

LETTER | Anwar Ibrahims' victory was actually highly expected, logical, and more importantly, a "make-sense phenomenon", as the recent PD by-election has a special ring for him to "wrestle" with other candidates to return to the House of Representatives.

As someone who adores Anwar's oratory skills, I hope that he can be a father-figure politician to every member of Parliament, especially newly-elected ones, in transforming "parliamentary cultures".

What I personally expect from Anwar's return to Parliament is that he could be "leading by examples" other MPs from Pakatan Harapan bloc in performing quality parliamentary debates, which had not been performed "in style", since the new government took the lead of Putrajaya.

"In-style" parliamentary debates, in my eyes, are the ones that can comprehensively deliver concrete explanatory messages in "lyrical tones", especially via eye-to-eye debates.

To me, there are no other MPs from PH besides Prime Minister Dr Mahathir Mohamad, Khalid Samad, Nurul Izzah and, of course, Azmin Ali who can speak and debate excellently and substantially in Parliament.

An excellent MP must, besides taking care of the constituents' needs, be actively involved in parliamentary debates, especially on issues that have close relations with his or her portfolio and areas of expertise.

Elected MPs should not just be paid for their "full attendance", but they need to be "voices of people" who can loudly express fruitful insights and ideas in every Bill and matter tabled in the Dewan Rakyat.

Parliament should be made a mutual channel for elected politicians to discuss important and relevant national issues that are beneficial to the people's well-being.

Anwar's leadership is needed in making Parliament a "harmonious house", to collaboratively solve national issues in a professional and intellectual manner that are free from verbal attacks that could tarnish the image of parliamentary democracy.

As a man who used to be an agriculture minister for two years since 1984, Anwar has what it takes to be "schooling" MPs on how to sharpen their tongues in becoming eloquent lawmakers. That can be inserted in 'parliamentary reforms" he wishes to deliver. Being an eloquent lawmaker includes mastering Bahasa Melayu as a main language in Parliament.

Anwar, weeks after commencement of the last parliamentary session, had reminded MPs to be proficient communicators in the national language. I believe that the newly-voted MP for PD will "instigate" practical initiatives that could progressively help improving MPs' Malay proficiency.

By improving language proficiency, MPs will get their confidence adequately equipped with their "fluent tongues". Like English, if you are a proficient user, you can efficiently transcribe what you have in mind into verbal words. Anwar, as the public knows, is a stupendous orator whose oratory skills are noteworthy. His speciality should be "institutionalised" PH in grooming its MPs to be as great as he does in Malay public speaking.

People are getting fed up of altercations in the Parliament as they won't bring any impactful solutions to the people's problems. Anwar should act as a master in re-mastering quality and effectiveness of parliamentary debates in this era of New Malaysia.

In hopes of seeing actual parliamentary reforms becoming a reality, ugly words like "Kepala bapak kau!", must be strictly excluded in the House of Representatives. How could we say that we are now breathing in "Malaysia Baru" but our parliamentary debates are still unhealthily conducted?

So, Yang Behormat Port Dickson, you now have bigger tasks ahead in leading the way of changing parliamentary cultures and systems. Welcome back, DSAI!