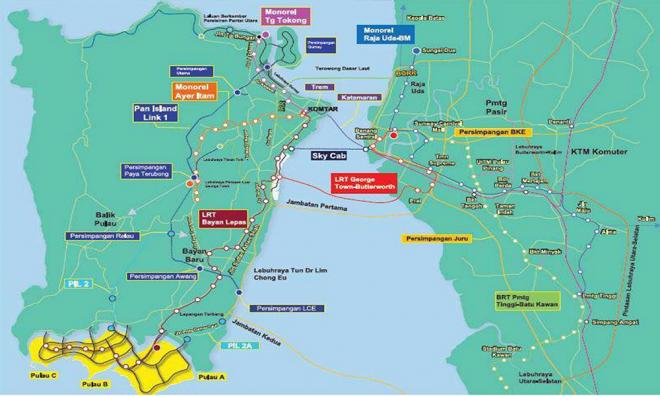 PIL 1: A golden chance for DAP leaders to practice what they preach

LETTER | In May this year, we voted for a change of government at both state and federal levels after 61 years of suffering under the yoke of Umno and its partners. We voted for hope and change.

The Pakatan Harapan parties went from being in the opposition to becoming the government of the day.  When they were opposition politicians they could only voice their objections and concerns. But today they are in power to carry out what they hoped and fought for. Are they carrying out the trust that we placed on them?

Let us examine this in relation to the biggest project confronting the people of Penang (also one of the largest megaprojects in Malaysia) – the RM46 billion Penang Transport Master Plan (PTMP) and, more immediately, phase 1 of this plan, which involves the proposed Pan Island Link 1 (PIL 1) and the LRT project. The PIL 1 is an extension of the aborted Penang Outer Ring Road (PORR).

What did our present chief minister Chow Kon Yeow say when he was the opposition MP in 2002? “If the findings of the Halcrow Report is true, Dr Koh (Tsu Koon, then Penang chief minister) would be irresponsible in pushing the PORR through as this will not be a long-term solution to the traffic congestion on the island.”

There were two other minor reasons why Chow opposed PORR – because it was a tolled road and no open tender was used to award the project.  But these cannot be the main reasons for opposing PORR.

And what did DAP veteran and Iskandar Puteri MP Lim Kit Siang say on May 28, 2002?

“The nightmare of the Penang traffic congestion is likely to be back to square one, not in 8 years but probably less than 5 years, after the completion of PORR… What Penang needs is an efficient public transport system based on sustainable transport policy, as PORR is not a medium-term let alone long-term solution to the traffic congestion nightmare on the island.”

Since these two DAP leaders could not be clearer on why they opposed construction of PORR - as it would not solve traffic problems - how does Chow now justify the PIL 1?

According to the Environmental Impact Assessment (EIA) of the PIL 1, the consultants reported that by 2030 (between five and seven years after completion of PIL 1), the traffic volume would reach up to 8,000 passenger car units per hour (pcu/hour) during the evening peak hours. Translated into layperson’s language, we would be back to square one in terms of traffic congestion.

This was exactly what the transport report of 1998 by international consultant Halcrow said of PORR. Back then, Chow asked Koh to disprove Halcrow’s findings. Today we ask Chow the same question.

Public policy must be based on scientific study, analysis and evidence, not on whims and fancies. That is why the Penang state government funds the Penang Institute to provide sound policy analysis and advice.

If the EIA’s conclusion is that the PIL 1 will not solve traffic congestion in the medium and long terms, then the chief minister must justify this to the people of Penang: on what other grounds did he base his decision to spend RM 8 billion on one highway that will not solve Penang’s traffic congestion and is fraught with safety risks, on top of financial, environmental, social and health costs? How should he explain his volte-face?

Lim Kit Siang made it clear that the only alternative is to have an efficient public transport system. This is a golden opportunity for these leaders to implement what they preached.

The chief minister said at the town hall meeting on Sept 20, 2018 that the state is proposing a balanced approach towards solving the transport problem, by building roads and public transport.

Let us examine the actual facts:

From the above, it is clear that Penang’s transport situation today is totally tilted towards roads and against public transport. Hence a balanced approach must mean prioritising improving public transport, and not building more highways that encourages more private road use.

The primary objective of the PTMP is to raise public modal transport share to 40 percent by 2030.

But spending RM15 billion on building highways in the first phase of the PTMP (RM 8 billion on PIL 1, plus RM6.5 billion on three paired roads and tunnel under the package with undersea tunnel concessionaire Consortium Zenith Construction Sdn Bhd) and RM 8 billion on one LRT line is not a balanced approach.

In fact, under the Halcrow PTMP, an integrated public transport network consisting of trams, bus rapid transit, commuter rail and new cross-channel ferry service was estimated to cost RM10 billion. But all these have been shelved or relegated to future dates, while priority is given to building highways.

The chief minister must explain to the people of Penang why such an unbalanced approach has been adopted. Is the policy based on scientific evidence or on other types of interests that we are unaware of?

The saying that “justice must not only be done, but must be seen to be done” aptly applies in this case. The people of Penang must have clear and credible answers to dispel any possible misgivings.

I respect and have worked with Chow for the last 10 years on the Penang transport issue.

Without reminding him of what he told Koh - that if the findings of the EIA report are true, then Koh would be irresponsible in pushing for the PORR - now, in the case of PIL, the arguments are even stronger that this will not be a long-term solution to the traffic congestion on the island.