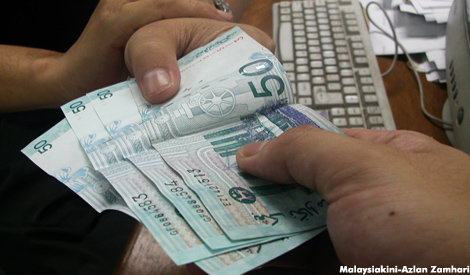 LETTER | I am a retired Education Ministry officer, whereby I started my career as a young teacher with idealistic views... that was before joining the ministry.

With the amount of corruption, deception, abuse of power, and black magic that I witnessed in the ministry, one would have thought that the principal business there would have probably been drugs or guns, rather than children and teachers. Eventually, the ministry's internal culture and graft tarnished my ideals on education in Malaysia.

Throughout my time in the ministry, I have witnessed corruption which occurred in the operations that leads all the way to the top. Everyone that works there knew it, but most chose to turn a blind eye to maintain popularity and to not get annihilated by the grafters.

Witnessing and not doing anything about it eats you inside. So one day I made a decision to report to the integrity unit of the ministry about a “selling evaluation sheet to the bidding company” scheme that I knew was actively happening.

To my surprise, the officers there knew about everything that I reported. In fact, they have much more extensive information on the individuals in mind, which on that day, the integrity officers took turns to display on their telephone screens to show me; the individual's houses, cars, watches etc, which I did not know about.

I was happy to see that the integrity unit was active and doing their work. To my dismay too, they also complained that not much will happen after that. Why?

So the story goes. Usually, the integrity unit reports will be taken up to the secretary-general, then to the minister's office.

At the minister's office, it will just pile up and be used as manuals for manoeuvring. According to the integrity officers, these reports are often abused to identify who are willing and who that won't sign off documents for their dirty work.

What do they mean by this? You see, whilst civil servants in the ministry remain unchanged for a long period of time, the minister's, however, gets rotated every few years. When a new minister comes in, he or she will bring in their own trusted people to look after their office.

A new portfolio will usually have trouble identifying who can or cannot be trusted? Who is dirty and who is clean? The integrity unit report can give a crash course for the new minister's entourage on who they can use in their machinery to approve projects for their cronies.

No wonder corruption is hard to curb in the ministry, and no wonder personnel don't bother reporting. In fact at these times, if you report, you will be in danger.

No surprise then that today's minister gets played out by his cunning civil service. For many decades issues on heavy bag have been pivotal.

Come to the crunch, the ministry's department can come up with a lousy research to pinpoint that only 38 percent of the school bag's weight is education related, and feed this information to the minister to communicate to the public. No wonder the minister is under such scrutiny.

These divisions are playing out the new minister and it is so obvious. Another one to watch out for, the education technology division is also famous for being a handful.

Many senior graft-prone officers are still in this division due to its history of awarding big projects. Without overhauling this, the current minister will have little hope of succeeding in anything.

Until today, the fact that these rogue officers still remain in the division signifies how powerful they are.

Corruption is not just in the federal office of the ministry, it is also very active in state and district levels, but this story is for another time.

It is quite worrying that most corrupt officers are from the teacher's grade of DG. Amongst grade of S (Social) or F (ICT), the graft is less heard of.

Hence, the route is clear, the reason to why the last government collapsed is because of the rotting education that the country has been providing, and the mass understood this.

Simply put, corrupt educators will result in a corrupt nation. A healthy nation will require ethically smart and clean educators. Put the two together, and we will be a step closer to healing our country.