Government must live up to 30 percent gender promise

LETTER | The Joint Action Group on Gender Equality (JAG) expresses concern over the minimal representation of women in government committees and councils set up by Pakatan Harapan.

Yet again, Harapan has neglected to fulfill its commitment to ensuring that women take up a minimum of 30 percent of all policy-making positions. Of the 11 policy advisory councils or committees formed by the Harapan government, only three have at least a 30 percent representation, and two have no women at all.

As women make up over 50 percent of the country’s population, there is an ample number of women who are both qualified and willing to take up such positions. The low representation of women on the committees and councils raises questions if the best candidates were selected for these important positions.

Ensuring that women make up at least 30 percent of the committees and councils will help ensure that top talent is not overlooked and that more inclusive policy recommendations are made. We should be aiming for an equal (50 percent) plus a more diverse representation.

The table below shows the percentage of women representation in policy advisory councils and committees that have been formed under the Harapan government: 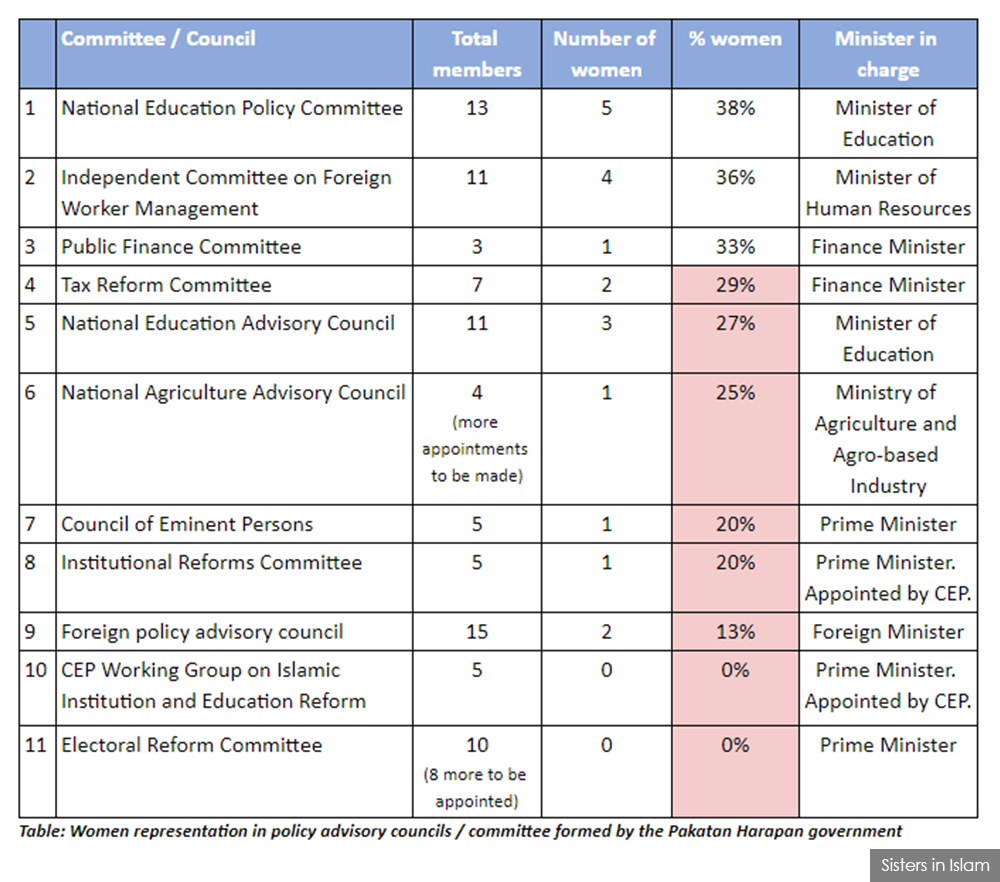 In order to rectify this lack of representation, JAG urges:

1. To ministries that have already set up committees or councils:

If women make up less than 30 percent of members of the committees/ councils, appoint more women to meet the 30 percent minimum threshold.

2. To ministries that will be setting up committees or councils:

Define clear terms of references and adopt a transparent selection process to ensure that the best and most representative talent is appointed. This includes a selection criterion and an open process where those qualified may apply or be nominated.

Ensure at least 30 percent of committee/council members are women and aim for equal and diverse (50 percent) representation.

3. To individuals (including civil society, academics, government representatives) appointed to committees or councils:

Prior to accepting positions, ensure at least 30 percent of members are women. Where this is not met, we urge all male appointees to reject appointments. We urge those who have already accepted positions to do the same.

The prime minister, in his recent speech at the UN General Assembly in New York said: “The new Malaysia will firmly espouse the principles promoted by the UN in our international engagements. These include the principles of truth, human rights, the rule of law, justice, fairness, responsibility and accountability, as well as sustainability”.

Women empowerment was also on the agenda of the prime minister’s recent RMK -11 midterm review.

As such, no justification is acceptable for any continuing failure to implement the commitments made including in implementing the Cedaw committee’s concluding observations (69th Session, March 2018) which requires Malaysia to increase participation of women in decision-making positions in the political and public spheres.

We urge that the Harapan government make good on its promise to uphold the principles of inclusion, representation and substantive equality for all.

The Joint Action Group for Gender Equality (JAG) is a coalition of 13 women’s rights organisations advocating for gender equality and social justice within a feminist framework.