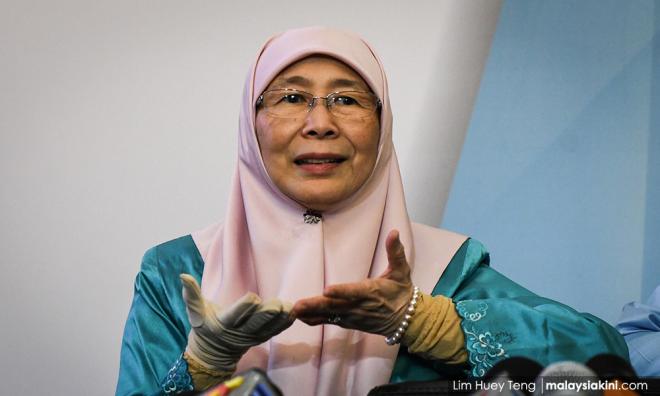 Wan Azizah has abdicated her responsibility towards infants

LETTER | Bersih Sydney believes Dr Wan Azizah Wan Ismail and her ministerial colleagues have abdicated their collective responsibility over infants, women and families by their comments on the barbaric practice of female genital mutilation (FGM) in Malaysia.

We note with dismay that Wan Azizah, the women, family and community development minister, referred to the continued practise of FGM by saying "if it doesn't give any benefit, we should do something about it."

Bersih Sydney quotes the World Health Organisation when we say "the procedure has no health benefits for girls or women."

Seen under the light of the WHO definition, the statement by Wan Azizah, a medical doctor herself, is even more shocking for its apparent display of ignorance on a key health issue.

The deputy prime minister showed no leadership at all for the vulnerable community her ministry should oversee and protect.

We note further that, after her ministerial representative denied that acts of FGM occurred in Malaysia and that only "female circumcision" was practised as "a cultural obligation," the minister also described the act as a cultural practice in Malaysia.

Bersih Sydney points out that “female circumcision” - partial or total removal of the prepuce (the fold of skin surrounding the clitoris) - is also considered FGM by the WHO.

It is misguided, irresponsible and dishonest to suggest this barbaric practice is 'cultural' and therefore arguably acceptable.

Anything short of condemnation of such a practice amounts to a quiet endorsement for the continued violation of the rights of vulnerable infants and women – the very people Wan Azizah was entrusted to protect by her ministerial portfolio.

FGM is not a Malaysian cultural practice. Like any other crime, it has never been part of Malaysia's accepted culture or its heritage. Even if it were, it's an irrelevant argument, because like slavery, FGM has no place in the 21st century."

Bersih Sydney believes that, coupled with Wan Azizah's response to the ongoing practice of child marriage in Malaysia, "citizens and voters must begin to question the DPM's continued ability to show courageous and coherent leadership on burning issues that fall under her ministership."

Wan Azizah's latest response on child marriage, that recommendations have been made to the Malay rulers and that the issue will be tabled at the next sitting of Parliament, is too little too late, because Malaysian minors, especially young women barely into puberty, continue to be sold into marriage by their parents.

The youngest of girls in Malaysia, infants and those in their early teens, will continue to suffer the horrific violence of FGM and the crime of child marriage, and go on to bear the scars of these practices for the rest of their lives - all under Wan Azizah's ministership.

Bersih Sydney believes these issues will inflict serious collateral damage on the party that Wan Azizah represents, PKR, as well as the Pakatan Harapan coalition, only a few months after Malaysian voters ousted a corrupt, divisive government that had ruled for decades.

Bersih Sydney, therefore, calls on all elected Harapan representatives to unequivocally declare that FGM, or female circumcision, and child marriage are criminal acts by nature.

Bersih Sydney further urges a public commitment by the Harapan government that it will move the parliament of New Malaysia to rule that these practices are deemed illegal and punishable by civil law as soon as possible.

Finally, Bersih Sydney urges parliamentarians of all parties to stand united on these issues to protect the most vulnerable of Malaysian infants, young women, families and communities.