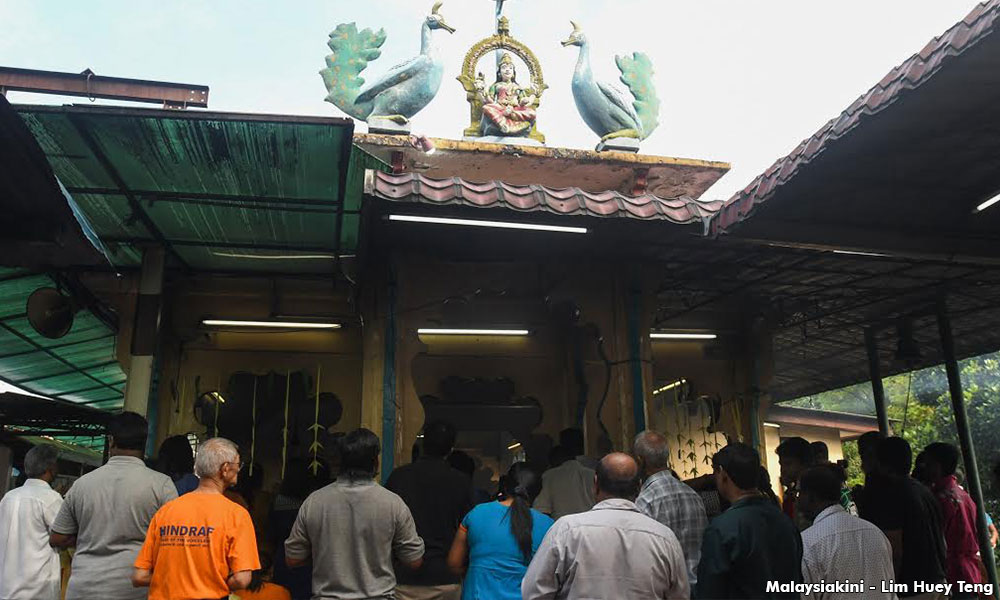 LETTER | There are many questions circulating in social and online media as regards TO the consent judgement entered into by the representatives of the Sri Maha Mariamman Temple Hicom, Shah Alam (the Seafield Estate Temple) and the developer in 2014 in a legal suit started in 1997.

The Seafield temple stands on the land originally comprised in Grant 3576 Lot 30 Mukim Damansara (the Land). It was built in 1891 on part of the land dedicated by its owners for the use of the Hindu employees of Seafield Estate. It has been maintained and used by the temple devotees ever since then to date.

The land was originally an agricultural title. Sime UEP Properties Bhd (Sime) bought the said land from Consolidated Plantations Bhd and decided to convert the land to a housing development scheme.

Consequently, the employees of Seafield Estate were retrenched and moved out of the estate quarters but many of these Hindu families still lived in the vicinity and continued to use the temple.

A crucial point to note is that when Sime made the application for conversion, the Selangor exco had imposed a special condition reading as follows:

Thus it appears that the state government had taken note of the legitimate interests of the temple devotees and provided for the preservation of the temple and its grounds.

An extract from the letter of the Pengarah Pejabat Tanah dan Galian dated July 1, 1987 has also been put in. It reads:

As Sime appeared to be bent on proceeding with its intention to demolish the temple despite the restriction above imposed by the state government, the then representative of the temple, Chellapah Kalimuthu filed an action against Sime to obtain an injunction to restrain Sime from demolishing the temple and to prevent the frustration of the legitimate interests and expectations of the temple devotees.

The injunction was granted by the court and the injunction order was further affirmed by the Court of Appeal and its reported decision is in Chellapa K Kalimuthu v. Sime UEP Properties Bhd [1999] 3 CLJ 247 CA. Justice Mahadev Shankar in that case held as follows:

“From May 1992 onwards, Sime has sent letters to the plaintiff indicating its intention to demolish the temple. In so deciding, Sime did not consult the plaintiff or take the interests of the temple devotees into account. The temple is a permanent and highly visible structure. By reason of the partial acquisition of part of the land conversion and other developments, the original title to the land has been substituted by a “Suratan Hakmilik Sementara” No. H.S. (d) 104558 for Lot 2925 which comprises the land on which the temple still stands.

“It is now zoned for housing development. This temple has been there since 1891. The exco and Sime were aware that when the conversion was applied for the state authority had imposed a special condition protecting the status and situation of the temple. There is a serious question to be tried as to whether the plaintiff has a legitimate interest and expectation which this court should protect. I took the liberty of directing the attention of both counsel to my judgment in Damansara Jaya Sdn. Bhd. v. Penghuni-Penghuni Kuil Muneswaran Alayam.”

“Under customary Hindu law it is well established that if a landowner sets apart land which he owns for the establishment of a temple which the public use for worship over a long course of time, a trust of that land will be deemed to have been expressly or impliedly created. The temple deity is deemed to be a juridical entity. The temple guardian is also deemed to be the trustee of the temple property and has a right to sue and be sued in that

capacity. To call such person committee members of an association could be a misnomer. Members of the public are also regarded as having a legal right of access to the temple to worship there if they are of the faith.

“Customary Hindu law has been applied by Malaysian courts where the circumstances so warranted. Factual evidence has been presented to this court that the owners of Effingham Estate had dedicated the site of the said temple for Hindu religious worship and that since 1915 the public had so used it without let or hindrance till January 1992 when this application was filed. There is a case to be argued that the public has a right so to use the access to the said temple and the temple itself.”

Instead of doing what is what is anticipated by the devotees, it seemed that Chellapah had a change of mind and seemed to be amiable to a relocation of the temple in subsequent years. Sime sold the land to One City Development Sdn Bhd (“One City”). One City continued with its efforts to relocate the temple.

At that juncture, Chellapa as the plaintiff in an action against Sime UEP Properties Bhd, Pengarah Perancang Bandar dan Desa Selangor, the Selangor state government and One City agreed to record a consent judgment on March 1, 2014. A very interesting turning point prior to the consent judgment was the fact that Nagaraju a/l Merganathan (“Nagaraju”) was brought in as an intervener in that suit. Nagaraju and his volunteers formed a committee to safeguard the temple while the temple's allegedly lawful committee headed by Chellapah was in favour of relocation.

b. One City shall deposit a sum of RM1.5 million (the “Temple Fund”) with Messrs Thomas Philip as stakeholders for the benefit of the existing temple. One City shall utilise part of the Temple Fund for the construction of a new temple with water and electricity supplied in accordance with plan and specifications as stated in Annexure A2 to A4 of this consent judgment (the “New Temple”) on a parcel of land which is set out and demarcated in yellow on a plan annexed hereto as Annexure “A1” to this consent judgment (hereinafter known as “Land A”)

d. The Jabatan Perancang and the state government shall within reasonable time gazette Land A and B as lands dedicated for the use as a place of worship by the temple.

Chellapah and One City later entered into an agreement dated Oct 8, 2016, to vary the consent judgment. Amongst the terms of this agreement are:

a. It was also term of the consent judgment that One City shall deposit (and have since deposited) a sum of RM1.5million (“the Temple Fund”) with their solicitors Messrs Thomas Philip (“the then Solicitors”) as stakeholder for the benefit of the Temple and which sum shall be utilised for the construction of the new temple on Land B.

c. The society which does not require Land A for the new temple and has agreed to relinquish all its rights, titles and interest to Land A together with all the structures erected on Land A to One City in consideration of One City agreeing to contribute an additional sum of ringgit one million to the society for the construction of the new temple on Land B.

d. One City has agreed to pay to the society’s counsel, Dato’ Kirubakaran a/l T Karthigasu a sum of RM200,000 as a contribution towards the society’s legal costs. Each party shall bear their own legal costs in all matters including this agreement.

Developments hence have raised various questions amongst the devotees as to the real motives of those involved in this temple's dilemma. Particularly, the questions of fraud and conspiracy to cause the restriction imposed by the state government to be conveniently buried and not known to the devotees and present-day authorities. These are the questions that have been put to me by the devotees when seeking my aid to save the temple.

The temple devotees have also commenced a suit to set aside the consent order based on purported evidence of fraud and conspiracy that surfaced last Friday. However, as Shah Alam court complex was shut down on Monday due to a bomb hoax, the devotees are hopeful their matter will be heard any time before to the temple's demolishment scheduled for the day after tomorrow.

The writer is Dewan Negara speaker and MIC president.