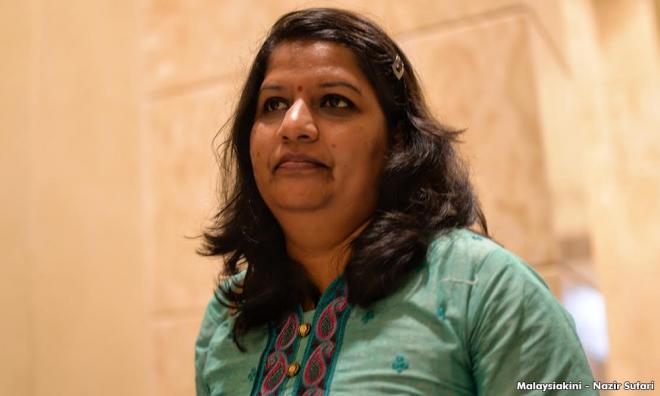 LETTER | Human Resources Minister M Kulasegaran, why are you washing your hands off the very bitter and acrimonious custody battle between M Indira Gandhi and her ex-husband Muhammad Riduan Abdullah?

Were you not Indira’s legal counsel in her many years of uphill court struggles, with the Federal Court in January 2018 nullifying the unilateral conversion of her three children by Riduan?

The reply given by Minister in the Prime Minister's Department Liew Vui Keong that it should be Indira who must initiate legal proceedings against her ex-husband, and his statement that in this case, we "cannot really ask for the government to interfere because this is a litigation matter taken up by the mother against the ex-husband," leaves not only Indira, but all single mothers and fathers whom courts have granted custody, dumbfounded and helpless in a lurch.

Despite being the de facto law minister, Liew has ironically flung the rule of law and court orders out of the window.

Are not all of Indira’s legal proceedings consistently with the Ipoh High Court, all the way to the Federal Court, “initiations of legal proceedings”? Why is Liew so fearful of Riduan, who has shown nothing but contempt against the rule of law?

The Federal Court had affirmed the ruling of the Ipoh High Court which awarded custody of the daughter Prasana Diksa to Indira. The police and authorities, which have been entrusted to uphold the law, must set an example by mandatorily ensuring adherence to the court decision.

If it is the position of the Harapan government that it is Indira who must initiate legal proceedings, then why bother even having judges and courts to determine disputes if their decisions need not be abided by?

Has not Indira exhausted all avenues in a civil court? It must be recalled that the civil court in granting custody to Indira had also ruled in her favour in her application for a committal order against Riduan.

Why is Liew replying no different than the police force in 2009, who told Indira that it is she who has to locate her daughter before the police could act?

Now that DAP MPs have been appointed ministers and deputy minister, has the power gone into their heads so quickly that they simply are avoiding this very serious constitutional issue?

Hannah Yeoh, as deputy women, family and community development minister, and as a mother, why are you not repudiating Liew’s thoroughly ludicrous reply and inaction, besides failing to insist to the authorities to unite Indira with Prasana?

The public held high expectations that the Harapan government. They believed that under the mantra of a 'New Malaysia', all the alleged inactions of the police force in the search for Prasana would be corrected.

Putrajaya under the new Harapan government has an obligation to safeguard the constitutional rights of all Malaysian citizens, in particular, those who for too long, have had their rights denied over to inaction by the authorities, misreading of the law by the judiciary, or preferences of one religion over the other.

How can it possibly be difficult for the police to locate Riduan, when a simple search with EPF records or education records or child’s inoculation records will reveal their whereabouts?

CHEW MEI FUN is the secretary-general of MCA.