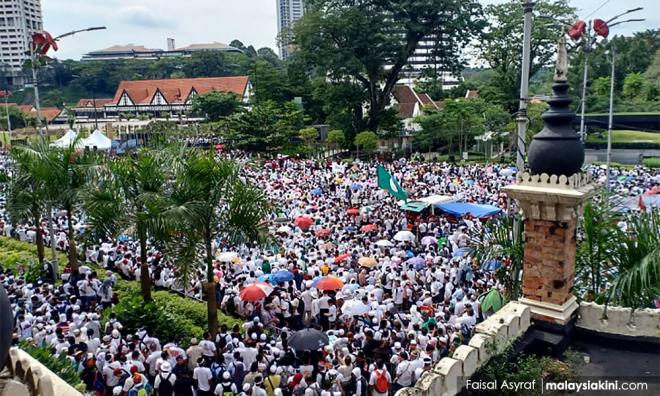 LETTER | Many concerned citizens had questioned if the anti-Icerd rally held on Saturday, Dec 8, helped build racial unity and harmony among Malaysians. It is a definite no.

Many felt the rally against the International Convention on the Elimination of All Forms of Racial Discrimination (Icerd) was not necessary because the government had relented to the demands of the organisers not to ratify Icerd.

Despite this, the organisers cunningly changed the purpose of the rally, supposedly to show gratitude to the government for not ratifying the United Nations convention.

Having listened to the speeches by various Umno and PAS leaders, it was clear the organisers had no intention to honour their words to show gratitude and thank the Pakatan Harapan government in its decision not to ratify Icerd, but to turn it into a political rally filled with speeches of racial and religious undertones.

Instead of rallying the various races into one united Malaysian people, the rally was all about the supremacy of the Malays and Islam that they claimed have eroded and felt threatened by the new Harapan government.

This had been the mantra played by Umno and PAS leaders to retain power in the past, but had failed miserably during GE14 because of the massive corruption and abuse of power by the very same leaders who claimed the Malays and Islam had been threatened.

It is disgusting to see the appearance of leaders who are facing serious charges for corruption, money laundering and abuse of power having the audacity to face the crowd and appear unremorseful.

Even the prayer (doa) recited by the ustaz at the close of the rally was inappropriate to the occasion.

A prayer should be for peace and harmony, and one with political undertone has no place in religion.

Political leaders must stop making speeches with racial and religious undertone that can cause fear and hatred among peace-loving Malaysians. Pray for love, peace and harmony to prevail for the benefit of our country and future generations.

The writer is the president of Persatuan Patriot Kebangsaan.