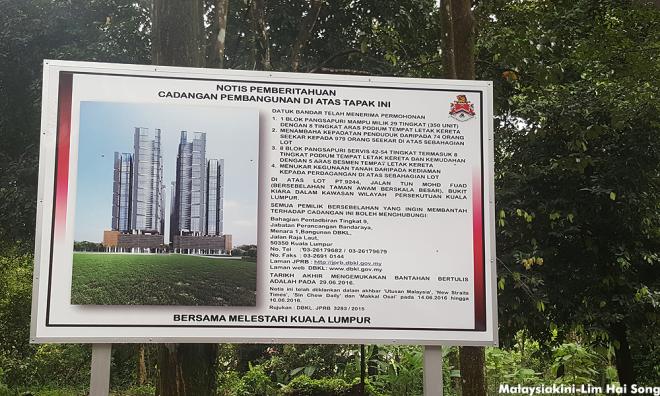 LETTER | As an exco member of the Taman Tun Dr Ismail's Residents' Association (TTDI RA), I attended the consultation meeting between Kuala Lumpur City Hall (DBKL), TTDI residents and the developer (Memang Perkasa Sdn Bhd) on the proposed mega-high-end condo project at Taman Rimba Kiara as required by the law. The outcome was disappointing, to say the least.

Since this mega RM3 billion project entailed the construction of eight blocks of 50-storey high-end condominiums (1,800 units) and a block of 350 units of affordable housing for the Taman Rimba Kiara longhouse (LH) community, the residents raised many relevant concerns and were adamant that they want Taman Rimba Kiara to be protected and preserved for public use. The developer’s representative was unable to give reasonable responses to the residents’ queries.

Although DBKL chaired the meeting, and aside from the protocol of giving the opening and closing addresses, they did not utter a word except to give an assurance that our views will be considered.

Most surprising was that there was no further consultation with TTDI residents although a promise was given that DBKL would respond to all the issues raised and questions asked.

Then out of the blue, we heard that the Development Order (DO) for the mega-project by Memang Perkasa Sdn Bhd had been issued on July 13, 2017, and about half of Taman Rimba Kiara was to be sacrificed. We were shocked and dumbfounded. Why was the approval done in a hush manner? Why did DBKL give in to the developer despite massive objections from the TTDI community? Were the peoples’ views and feedback not important? Why were the TTDI residents not consulted before a final decision was made? DBKL has not issued any justification or rationale why the RM3 billion project was approved. Why?

So far, the only reason given by DBKL for approving the mega-project is that the 100-odd long-house residents will be provided with proper housing units.

DBKL made a promise 36 years ago to the former Bukit Kiara rubber tappers at TTDI of decent housing but till today, the promise remains unfulfilled.

It is difficult to fathom why DBKL is so unwilling to allocate any funds for a housing project for the longhouse residents near Taman Rimba Kiara at TTDI. Why is DBKL sidelining the basic needs of this community which has been waiting for 36 years?

DBKL cannot pass the buck of providing affordable housing units for the longhouse community to others or third parties. DBKL simply cannot wash their hands of their 36-year old promise.

Now that there is still an ongoing legal battle between the Save Taman Rimba Kiara group and the developer, when does DBKL expect the court case to be over? The longhouse residents cannot wait forever especially after having waited for 36 long years. DBKL cannot just fold their arms and wait for the courts to decide. Although the courts recently gave their verdict in favour of the developer, the appeal process may still take time.

In addition, the Federal Territories Minister has assured that should the ongoing investigation by MACC prove any wrongdoing, the project will be cancelled. With such a scenario, it is the longhouse residents who will suffer as they will have to continue to wait to see if wrongdoing is proven. Then they will start all over again from scratch.

How long will the longhouse residents have to wait? The way things are unfolding, I don’t think anyone – not even DBKL - can give a reasonable answer to this question. Be mindful that even after a decision is made, it will take another 18-24 months to complete construction of their houses.

Since providing housing is at the core of Yayasan Wilayah Persekutuan (YWP) principal objectives, the entity should be called upon to allocate some funds for the project to provide the initial seed fund to kick-start the affordable housing project. This can be done expeditiously as the FT Minister is also the chairperson of YWP.

Ideally, YWP should also take steps to revert the ownership of the 12-acre site to the government.

In the final analysis, DBKL should not only take full ownership of this project to provide affordable housing to the longhouse community but also give this project the highest priority. This is a plea to DBKL to please give back the longhouse residents their dignity and make good what was promised to them 36 years ago.