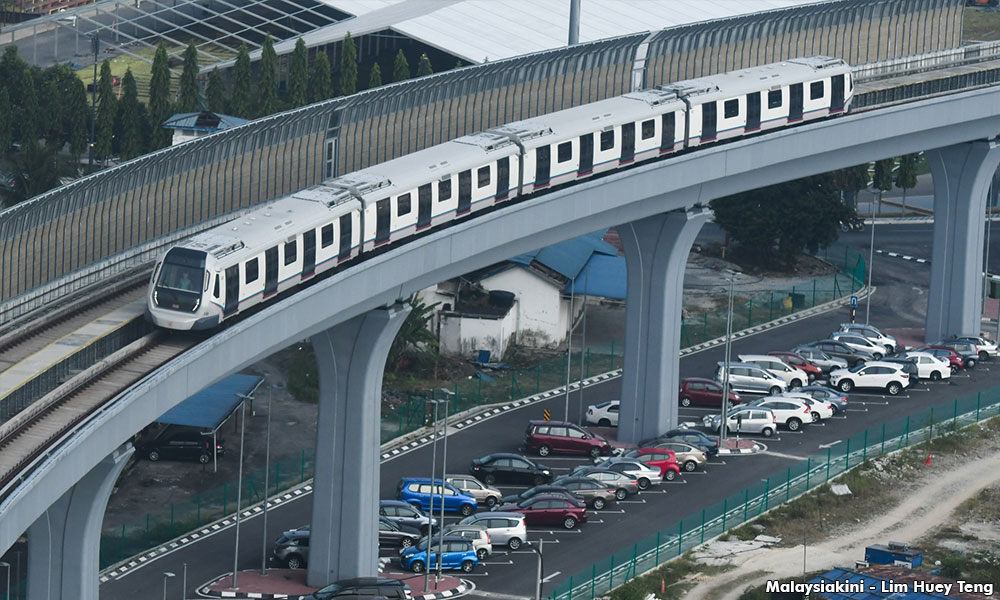 LETTER | On Nov 30, 2018, it was reported that Dr Mahathir Mohamad said the MRT project (above) for the Klang Valley was overbuilt and too expensive.

“It cost RM50 billion but the number of passengers using the MRT is very small, about 130,000 only. That’s not enough to give any return.” He continued: “When you build something that will only have full ridership maybe 20 or 30 years from now, it is too early to build. You can build in stages.”

This was confirmed by Gamuda’s group managing director, Lin Yun Ling, who also said, “it was too big and too luxurious.” He also highlighted that the Putra LRT network took about 20 years to reach a ridership of 250,000 per day, compared to its ridership of 50,000 per day during the first year of operations.

So what about the Penang government’s proposed LRT line from Komtar to the Penang airport and to the three reclaimed islands estimated to cost RM8 billion?

The proposed LRT is too early for the same reasons that Dr Mahathir adduced for the MRT; it is too late because the LRT technology will soon be superseded by newer technology, in particular, the Autonomous Rapid Transit (ART) that is cheaper, faster, more scalable and flexible.

However, the SRS consortium made up of Gamuda, Ideal Property and Loh Phoy Yen Holdings, the project delivery partner for the PTMP, changed them to an LRT and monorail.

SRS estimated an initial ridership (in 2023) at 42 million per year, or 115,000 per day – an unrealistic number. To understand this, we compare it with KL’s experience with its rail systems.

The MRT line has a catchment population of 1.2 million whereas the population catchment in George Town and the southern part of Penang island is less than 350,000 people. Another relevant comparison is Rapid Penang’s total daily ridership which amounted to only 90,000 after more than 10 years of operation with 305 buses plying 71 routes throughout the whole state.

SRS estimated the annual operating cost of the LRT at RM170 million. For the operation to break even, daily ridership would have to be 115,000 at an average of RM4 per trip. Even taking into account tourist arrivals, it is inconceivable that initial daily ridership for the Penang LRT can reach 115,000.

If the actual ridership is 20% of that projected, the state is staring at an annual deficit of RM130 million compared to the Penang state budget of RM700 million in 201.

Roger Teoh, a PhD transport student at Imperial College, raised the same concerns of ridership and large potential losses. He said: “The unrealistic 42 million ridership forecast has been raised four times in public but we have yet to hear a response from the Penang government.”

In short, the admonition of Mahathir for the MRT also rings true for the Penang LRT. “When you build something that will only have full ridership maybe 20 or 30 years from now, it is too early to build.

If it is too early to build an LRT that is oversized and overly expensive, it is too late, i.e. behind time, to build an LRT when more up-to-date technology is available to deliver the same level of service at a much lower cost.

In the last couple of years, the Chinese manufacturer, CRRC, made a breakthrough with the introduction of the autonomous rapid transit (ART) or, in layman’s term, the trackless tram. This combines the technology of high-speed rail with that of buses.

The ART runs on ordinary roads guided by sensors that follow routes on virtual tracks. Since there are no permanent tracks to lay, construction is cheap and fast. The trackless system has low construction and maintenance cost.

A trackless tram costs around AUD$6 to $8 million per km which is 93% cheaper relative to the light rail system in Sydney which cost AUD$120 million per km. Furthermore, having no permanent tracks, it allows for dynamic and flexible routing depending on traffic conditions and future developments.

The system was first tested in Zhujou and has received excellent reviews in Australia and Europe. Professor Peter Newman, a famous transport expert, recently visited China to study the ART system and returned convinced that it is a transformative transit technology. He said cities are lining up to introduce trackless trams all over Australia.

Given fast-changing technology, it would be irresponsible for the Penang state government to not review the proposed LRT and monorail systems which are out-dated, too expensive and inflexible.