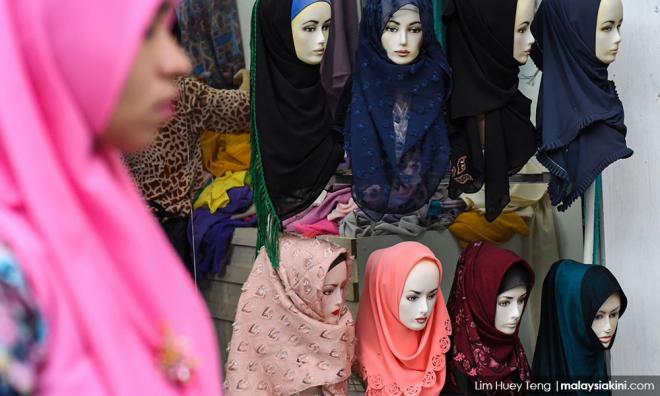 No need for criticism against the Muslim dress code

LETTER | Sometimes we marvel at how some parties claiming themselves to be liberal human rights defenders flip flop in their decision and thinking.

They complained about 'Say No to Zina' campaign by an agency under the Women, Family and Community Development Ministry, which is one of the many preventive steps to curb social ills and to protect men and especially women particularly from engaging in illicit sex.

And yet, they condemn the proposed guidelines for the private sector in protecting the rights of Muslim women to cover their aurat, particularly to wear hijab.

The problem is real. There are companies and employers asking them not to wear the hijab if they want to be employed, which is why the guidelines must come into place.

Not to mention there are many such cases. It is not only that the International Women's Alliance for Family Institution and Quality Education (Wafiq) last year discovered that three out 12 employees met by their representatives suffer from discriminatory requirement by their employees, but the headscarves ban extends to all departments, which involve face-to-face interaction with hotel clientele.

But the fear mongering by these women rights groups including a transgender rights group is just unimaginable.

First of all, describing the guidelines as akin to codes is somehow problematic because if it is a guideline, then people including women have the option not to follow.

If it is a code, which is a stronger word, it sounds like the people including women must abide by.

More importantly, the government has already clarified that it is optional. Because the guideline is meant to provide options to prospective employees among Muslim women and better protection of their religious rights.

However, it could also be described as a code because it imposes obligations on part of the employer to provide the option and secure the right of employees for wearing hijab.

It should not be an issue. Seriously.

But it seems these NGOs do have some kind of phobia towards the word 'code', or even 'abstain' as meant for the anti-zina campaign.

The Joint Action Group for Gender Equality (JAG) claims that the guideline would lead to "unintended consequences."

Everything the government plans, or even as we ourselves plan, must have their own objectives and we certainly cannot say that there won't be any "unintended consequences," because they are unintended right?

So JAG mentions some of those consequences not intended by the guideline such as "social pressure, harassment, and, ironically, discrimination."

All these while we already have in existence a much more widespread and even stronger code which is the religion itself.

Covering aurat is a part of Islamic obligations on Muslim women. But, have Muslim women been ostracised for choosing not to wear hijab as much as the Muslim women who choose to in the private sector?

The fact is that the problem faced by Muslim women who choose to oblige the religious instruction lacks social and especially industrial support, as can be observed in the hotel industry.

Even if they choose to wear hijab they could still be ostracised, harassed and even discriminated for being labelled as too extreme in religious practices, not flexible, not compliant towards employers' demands or even not liberal.

And these are the "unintended consequences" of these liberal women rights group fearmongering and complaining to dismiss the guideline.

Which is why the guideline should be there and it is fair. But does JAG really care? I leave it to the readers to decide.

That is why it is utterly and unnecessarily exhausting our intelligence and mind to even argue with these liberals.

It is as if the preventive steps taken to better protection of women is nothing less than moral policing and that it is a declaration of war towards them. Which is not the case.

DANIAL ARIFF SHAARI is a member of Ikatan Muslim Malaysia.