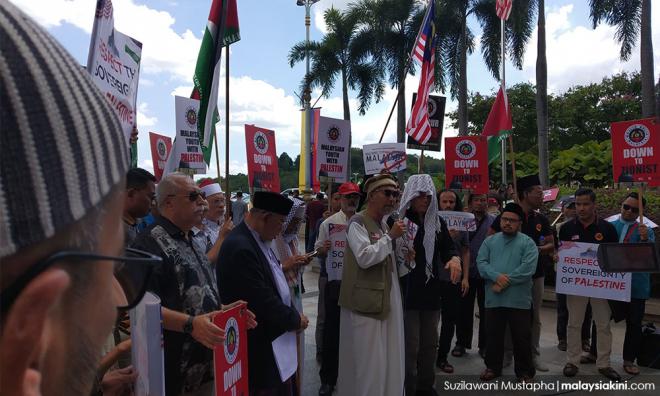 LETTER | Last month the Malaysian government announced its decision to ban Israeli athletes from entering the country to contest in an international swimming competition that was to be held in Kuching, Sarawak. This decision drew heavy criticism from Israel, but received a warm welcome from the Palestinian people. Malaysian flags flew high at Palestinian football fields and were waved repeatedly by Palestinians attending Great Return March protests in Gaza. In Malaysia, the government decision received strong support from many mass movements and civil society groups like Abim, Ikram and over 40 other NGOs.

Although on Jan 27, 2019 the International Paralympic Committee announced its decision to withdraw hosting rights from Malaysia, the Malaysian Government reaffirmed its historic decision of banning Israelis from coming in. Malaysia’s young Sports Minister Syed Saddiq Abdul Rahman commented boldly that “if hosting an international sporting event is more important than standing up for our Palestinian brothers and sisters who get murdered, maimed and tortured by the Netanyahu regime, that means Malaysia has truly lost its moral compass”. Days later, hundreds of activists rallied in front of the Prime Minister’s office in Putrajaya to express their endorsement of the Malaysian stand.

In spite of the wide public support for this decision, some displeased voices were heard on social media. A small number of articles appeared in Malaysian news portals questioning the ban. Most of these voices were concerned about Malaysia’s interests in hosting that international event. Some however, were more concerned about establishing ties with Israel, claiming Malaysia would benefit from such ties. These few writers miss the big picture in Malaysia’s principled stand; the country is championing the rights of the oppressed.

Half of the Palestinian people are refugees outside their homeland (about 1,000 in Malaysia) while another half live under Israeli military rule or supervision. We are one of the most persecuted nations in modern history. The Zionist ideology, which advances the supremacy of Jews, has always preached violence and resulted in some of the most heinous crimes in modern history.

In its early days, Zionist Israel wiped out over 500 Palestinian towns and villages to create its own Jewish State. About 700,000 Palestinians were made homeless in 1948 due to the creation of this state. Over the following years, wars of expansion and policies of domination resulted in more destruction and atrocities.

Today chauvinistic Israeli governments continue to illegally impose a military occupation on the West Bank, mercilessly besiege civilians in the Gaza Strip, and openly practice apartheid policies against all Palestinians. Palestinian Muslims, Christians, and Jews continue to suffer from these Israeli practices and violations of their basic human rights.

On March 15, 2017, the United Nations’ Economic and Social Commission for Western Asia (ESCWA) released a report entitled “Israeli Practices towards the Palestinian People and the Question of Apartheid”. Although two days later, the Under-Secretary General of the agency, Rima Khalaf, resigned rather than withdraw the report due to pressure, the report was out. This was the first time a UN agency acknowledged Israel as an apartheid regime. The report concluded that “Israel has established an apartheid regime that dominates the Palestinian people as a whole.

Israel never shied away from inflicting pain on the Palestinian sports sector. Palestinian sports facilities were targeted repeatedly by Israel’s state-of-the-art war machine. On April 1, 2006, the Palestine Stadium in Gaza was completely destroyed after being targeted by an Israeli airstrike. The stadium was again bombarded on November 19, 2012. Over the past two decades, hundreds of thousands of Palestinian youth were killed, handicapped or detained by Israeli occupation forces. Hundreds of them were athletes who lost their sporting careers and future due to this Israeli onslaught.

It is very unfortunate that many of these Israeli violations against Palestinian sportsmen and sports facilities go unnoticed. Large-scale Israeli war crimes like the 2002 invasion of the West Bank, the 2008/2009, 2012 and 2014 aggressions on Gaza, and the ongoing illegal erection of the apartheid separation wall also go unnoticed. This is probably due to the popularity of the old myth that Israel is a democracy.

Those who notice Israel’s crimes are advocating Boycott, Divestment, and Sanctions be imposed on the Israeli regime. BDS is a civilian campaign that was initiated by a large coalition of Palestinian NGOs in 2004, and continues to grow the momentum of resisting Israeli apartheid all over the world. International civil society groups have been consistent in supporting this struggle. It is high time governments and intergovernmental organizations also join the call.

American civil rights icon, Martin Luther King, Jr. once declared: “Injustice anywhere is a threat to justice everywhere”! If we truly seek equality and freedom in this world, it is vital we support the freedom and emancipation of the Palestinian people. Malaysia made the right decision. Its decision will make a difference in the struggle for a free Palestine. Terima kasih, Malaysia!

The writer is the chairman of the Palestinian Cultural Organization Malaysia