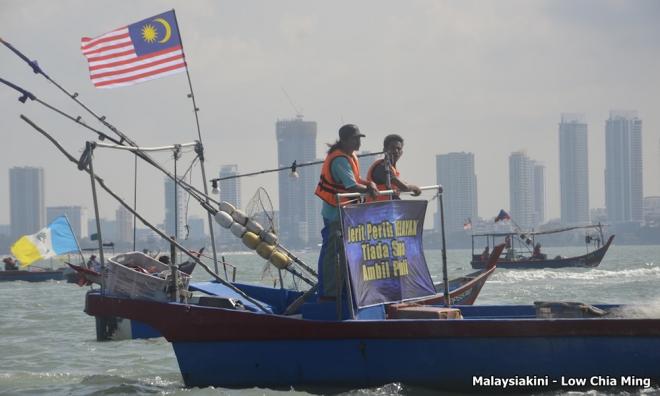 Stop reclaiming seas at expense of livelihoods and environment

SAM’s new publication, titled “Impacts of Coastal Reclamation in Malaysia”, details the biological, physical, socio-economic, sociocultural and other impacts of reclamation, highlighting several cases in Malaysia. SAM’s study finds that coastal development and reclamation projects have robbed fishers and communities of use and access to coastal and marine resources.

Thousands of hectares of fishing grounds and marine habitat have disappeared due to the craze for reclamation. Reclamation projects are abound in Kedah, Penang, Perak, Selangor, Melaka, Negeri Sembilan, Johor, Pahang and Kelantan. For example in Penang, the state government plans to reclaim 4,500 acres south of Penang Island, neglecting the heavy toll on fisher communities and marine resources.

The mining of marine sand and aggregates used for reclamation and development projects are also increasing and causing significant impacts to seabed flora and fauna. Millions of tonnes of sand have to be mined and rocks quarried to create new land.

Dredging and extraction of aggregates from the benthic (sea bottom) zone destroys organisms, habitats and ecosystems and deeply affects the composition of biodiversity. Research shows that this leads to a net decline in faunal biomass and abundance, or a shift in species composition.

SAM will be submitting this publication to members of the National Physical Planning Council (MPFN) urging the council to cancel all proposed reclamation projects in the country and in particular the Penang South Reclamation (PSR) Project. The submission is in response to last week’s statement by Penang state exco Jagdeep Singh Deo that the PSR will be presented at the MPFN in April.

From the outset, the proposed PSR project involving the creation of three islands stretching from the south of the Penang International Airport and eastwards to the vicinity of Permatang Damar Laut, is not needed at all. The main reason for the PSR is to create land banks to finance the Penang Transport Master Plan (PTMP), which is another unjustified project.

The Penang state government seems to be bulldozing its way to get approvals. Last week, PLANMalaysia director-general Rokibah Abdul Latif was quoted as saying that the PSR was not tabled earlier to the MPFN as the Penang State Structure Plan 2030 (PSP) was still not in place. Responding immediately, Jagdeep said the draft PSP 2030 is in its final stages and nearing gazettement.

A hearing on public feedback on PSP 2030 has yet to be carried out, and we fear that this exercise would be merely a sham and objections are not seriously considered for revision of the draft PSP.

In addition, there is the question of financing the PSR. The finance minister last week revealed that the federal government’s debt and liabilities still hover around RM1 trillion. It would be imprudent for the federal government to channel any funds to the state for an unjustified project. Getting soft loans either locally or from external sources will put us further into debt.

Besides wasting funds and natural resources, the PSR will have a tremendous impact on fisheries. Fishing activities are conducted extensively within the proposed PSR area as well as in the surrounding sea. The proposed reclamation project will impact the marine food chain and the fishing industry due to the total loss of mudflats. Loss of coastal habitat due to this proposed project is a major environmental blow.

Adding on to the downstream activities, this multimillion-ringgit fisheries sector on which thousands depend is being traded off for development. Fish are being wiped out, and the fishermen will soon be too as they lose fishing grounds. Is that the intention of the state government?

We hope that the chief minister and the state will review and realise that the PSR project will indeed negatively impact a wide sector of the population and our environment.

Note: SAM’s report, “Impacts of Coastal Reclamation in Malaysia”, can be downloaded here.

Penang island reclamation plan to be presented in April
19 Feb 2019
Gov’t to set up welfare net for fishermen
21 Feb 2019
Dr M: Handouts will not solve plight of fishermen, farmers
7 Jan 2019
Teeing off in a forest reserve
13 Feb 2019