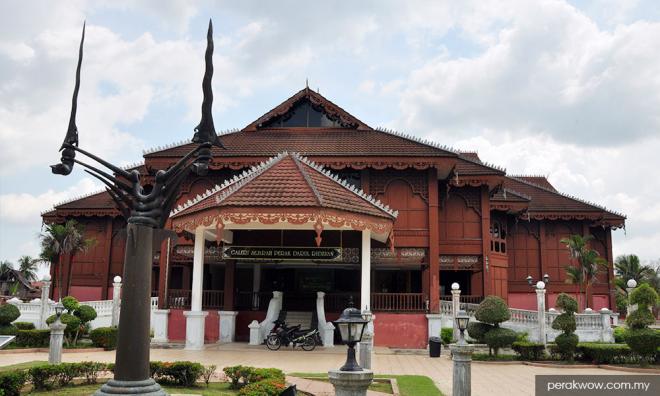 LETTER | Last March I had the pleasure of bringing my students from an Ipoh secondary school on a two-day trip around the state of Perak. It was on this occasion that we decided to visit the Pasir Salak historical complex (above). One of the goals of our adventure was to increase the students' knowledge of Perak’s history, culture, and people.

Pasir Salak seemed like the perfect place to learn about the struggle for Perak and Malaysia’s independence. It is a site that, along with commemorating the assassination of Perak’s first British Resident, functions as a museum about the fight for Malaysian independence from the original colonial powers up until Merdeka.

Unfortunately, it is my opinion that the museum’s method of historiography is flawed and damaging, presenting an almost exclusively Malay history of independence rather than a factually Malaysian account.

I am currently in Malaysia on a Fulbright exchange grant for the year, having grown up outside of New York City and having attended university in Abu Dhabi. As a foreigner living in Ipoh, I know I have in no place to question the race-politics of Malaysia. But as an educator in a multiracial classroom, it pains me to see students indoctrinated by a Perak government-funded museum that their ancestors had no role in the creation of modern Malaysia, especially when that is not true.

I know a multiracial society can teach moments of inclusion. I’ve lived, learned, and taught in at least two of them. It’s part of why I wanted to come to Malaysia on a cultural exchange programme in the first place. When I brought my Indian-Malaysian and Chinese-Malaysian students along with my Malay-Malaysian students to the Pasir Salak Museum, it was because I wanted them all to be proud of their country’s history– their country’s shared history.

If I were one of my Indian Malaysian students, I would have felt out of place in the museum. Even though my family for generations had called Malaysia home, I would’ve seen no sign of it. I would have felt like my people had no major role in the country’s establishment.

If I were one of my Chinese Malaysian students, I would have also felt upset by the museum. Even though likewise my family for generations had called Malaysia home, I would have seen that documented only in the chaos caused in the Larut Wars and the Emergency. I would have felt like my people had existed only in opposition to the country’s establishment.

And, if I were a Malay Malaysian student, I likely would have thought that a Malaysia for only Malays is the status quo. That is only if I didn’t take the noted inclusion of the Kampung Bekor attack during the Emergency and the dioramas depicting opposition to the original Malayan Union to heart. The selected inclusion of those pieces and the lack of positive pieces on the other races would lead me as a Malay Malaysian student to believe the other races have exclusively undermined Malay Malaysian rights and only by some fluke have a place in the modern country.

Nominally the Pasir Salak Historical Complex’s vision statement is, "To collect, research, preserve, exhibit and publish materials about the patriotism and nationalism of the Perak people and help the government's efforts in promoting tourism.’ The advancement of an exclusively Malay narrative, and at times one seemingly hostile to other races, falls short of that honourable statement.

I want all my students to see how their ancestors assimilated into modern Malaysia, whatever problems and nuances might have come with it. Malays that started, maintained and succeeded in leading agitations against British colonial rule. Chinese that worked nearby in the tin mines and businesses that financed the building of Ipoh, Taiping, and Kuala Lumpur. Indians whose labour in the countryside fed the peninsula and made Malaysia for a time the world’s greatest rubber exporter. And the Orang Asli who were there through it all, preserving the country’s traditions.

The Pasir Salak Museum should present a more multiracial history and a more nuanced history, like the display of keris from all over Southeast Asia in the lower level of that very museum. It should show a Merdeka Day where Malays, Chinese, Indians and the Orang Asli of Perak alike commemorate their efforts. It should pair the perils of the Emergency with the more multiracial truth of the Larut Wars and maybe even expand on the brutality faced by all, but especially the Chinese, during the Japanese occupation.

And finally, it should show pieces displaying the centuries-old contributions of Indians, Chinese, and Orang Asli to Malaysia in their own right.

Perak and Malaysia’s history and their relationship are complex. But when I bring students (or, really, anyone) to the Pasir Salak Museum, I want them to come away with a shared sense of Malaysian identity, one that was united in opposition to British colonial domination. The Pasir Salak Historical Complex can be a small academic beacon of unity and pride and I hope it truly becomes that.

pasir salak museum
history
racial inclusion
Related Reports
Gov't urged to regulate private museums to prevent 'distortions' of history
a year ago
Race, religion and redemption
a year ago
Umno senator wants party to accept Indians face most discrimination
a year ago
Yoursay: Curriculum reform not enough for schools ‘to be great again’
a year ago