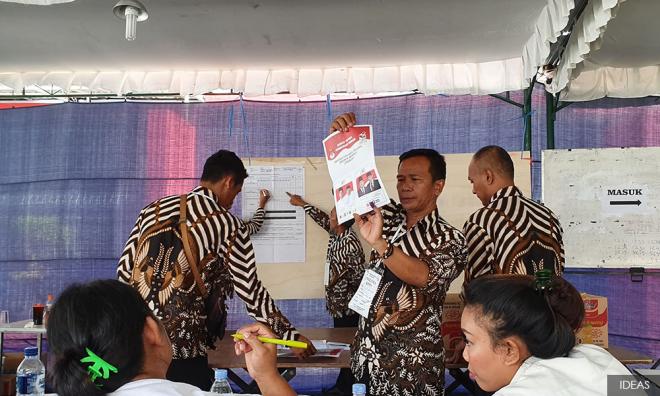 LETTER | The Institute for Democracy and Economic Affairs (Ideas) has been in Indonesia as international observers for the Indonesian General Elections 2019 (Pemilu).

Both APDI and Ideas have been certified as official Observers by the Badan Pengawasan Pemilu (Bawaslu), Indonesia’s electoral monitoring body.

Aira Azhari and Faiz Zaidi from Ideas’ Democracy and Governance Unit were stationed in Solo and the capital city of Jakarta, respectively.

“My experience as an observer in Solo was generally positive. I was impressed by the calm, peaceful and orderly atmosphere in all the polling stations I visited, including the prison and mental health hospital. I also got the chance to witness the vote counting process, which is very unique. The vote counting at the Tempat Pemungutan Suara (TPS) level is done openly, where it can be witnessed by any member of the public."

"This process not only enhances transparency and accountability but also encourages public participation in the democratic process. Considering that Indonesians vote for five candidates in various levels of government, this live vote counting process could take a long time, but they did it anyway. This shows an exceptional level of political will and an impressive level of civic awareness from Indonesians”, reported Aira.

She told us that in terms of irregularities, there was one TPS where the counting process was not done thoroughly, and the total votes were not tallied after they were counted. There are videos being circulated that allege ballot boxes have been compromised and tampered with.

We urge the Komisi Pemilihan Umum (KPU) to investigate these incidents thoroughly.

“Indonesia is the world’s largest Muslim-majority country to elect their next president, the national legislature, provincial and local governments. I was really impressed by the Government’s will to do this direct national election despite their demographic complexities and high costs incurred by the Government. The fact that the Indonesian government allowed prisoners and mental health patients to vote is also admirable,“ reported Faiz.

He added that there were a few cases where voters were not allowed to vote because they were unable to provide a certain form, which according to electoral rules, is not required.

This rule is also applied inconsistently throughout different polling stations. KPU should really take into account these issues raised during this election so that procedures in the next election can be improved.

Ideas also implores the KPU to conduct a thorough investigation of the ballot boxes filled with marked ballot papers that were found in a shophouse in Selangor last week. KPU must ensure that the investigation is done fairly and appropriate action should be taken for those responsible.

In general, this year’s Pemilu is a true festival of democracy. Indonesians from all walks of life turned up enthusiastically to vote for their leaders in the world’s largest single-day election. The voter turnout was high at 80.9 per cent.

Despite it being only two decades since their democratic awakening, Indonesians’ desire for a strong democracy, underpinned by free, fair and competitive elections is truly exemplary.

Ideas is a policy research organisation with the mission of improving the level of understanding and acceptance of public policies based on the principles of the rule of law, limited government, free markets and individual liberty and responsibility.