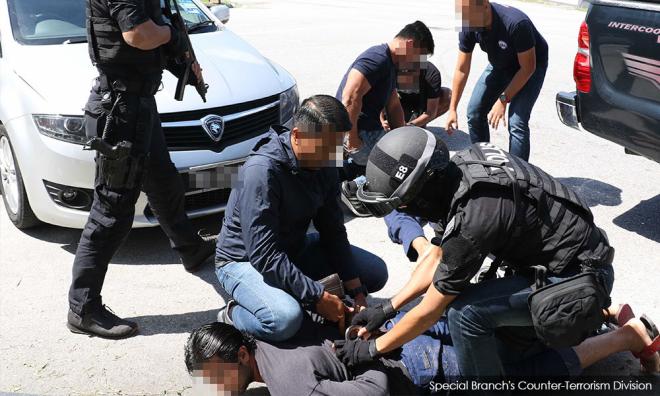 M'sians must do more to help police counter terror threats

LETTER | It is certainly that time again for all peace-loving and law-abiding Malaysians to once again appreciate the recent success of Malaysia’s Counter Terrorism Division (E8) in detaining four suspected militants.

According to the newly minted IGP, Abdul Hamid Bador, these four, among others still at large, were part of a "wolf pack" Islamic State (IS) cell which planned to assassinate four VIPs and launch large-scale attacks on non-Muslims houses of worship, as well as entertainment centres in the Klang Valley.

The security apparatus seized six Improvised Explosive Devices (IEDs) that had been obtained from a neighbouring country, along with a CZ9mm pistol and 15 bullets.

Those familiar with Improvised Explosive Devices (IEDs) will know that such a device will cause maximum fatalities and mayhem. The international flavour of the nationalities of the terrorists detained raises many questions, with one having a UNHCR refugee card.

It also confirms the systemic weaknesses in preventing the smuggling of weapons and arms and the movements of terror cells across our fragile borders.

This is a timely reminder to many among us who are delusional, in denial, or worst, plain rejecters of the presence of international terrorists, sleeper agents, closet terrorists, funders through money-laundering activities and their sympathisers here in our homeland.

There are those who even reject the fact that several of the 911 terrorists were also here in Kuala Lumpur, a fact already well-documented among security agencies globally.

The sad thing is, when issues and fears are raised in a tabled and constructive manner; we are accused of being carriers of Islamophobia.

Since our elite team on counter-terrorism is still tracking down three other members of the terror cell who are still at large, we, members of the Malaysian public must do our best to assist with any information or leads we may have in the national and public interest.

This includes those who claim to moderates who need to assist our security apparatus to keep us safe in detaining or neutralising the extremists. We must remember that silence, inactivity and not taking responsibility are not an option.

Most importantly, data reveals it is the minority extremists that kill, so the majority must act decisively. It is the radicals that behead, massacre and bomb innocents.

With these horrific details in mind, it is about time that we Malaysians act decisively to rid the nation of any radicals, their hate and terror dogma in the name of race and religion and safeguard our law-abiding and peace-loving nation, Malaysia.

The writer is president, Consumers Association of Subang and Shah Alam, Selangor (Cassa).