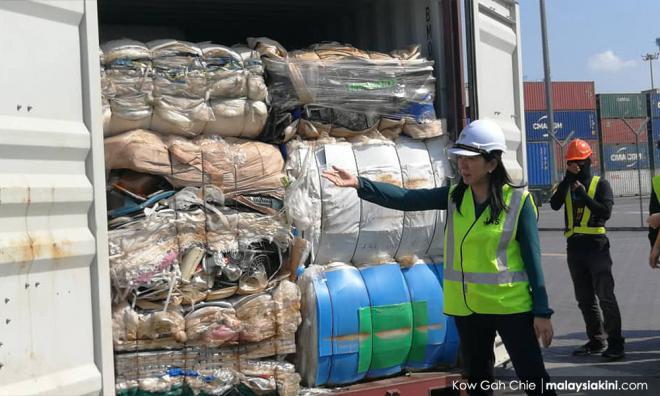 LETTER | The Malaysian government should be commended for acting assertively against the illegal importation of plastic waste. Environment Minister Yeo Bee Yin was right in pointing out that Malaysia is not a dumping ground for developed nations, and that locals who facilitate such activities are traitors against our national environment and health.

The problem of illegal plastic waste cannot be overstated. A comprehensive report by Greenpeace last year highlights the magnitude of the problem.

The report points out the global pattern of how the so-called recyclables are increasingly being shipped from developed countries to middle- and low-income countries.

Malaysia is the top receiver of such plastic waste in Southeast Asia, where 754,000 metric tonnes were “imported” in the first seven months of 2018 alone.

This amount pales in comparison to the 3,000 metric tonnes of plastic waste which, as announced by the minister yesterday, will be sent back to their originating countries.

The vast majority of such plastic waste is not recycled. Instead, it is incinerated and dumped by the illegal operators.

The Greenpeace report further illustrates the consequences of such actions. Local residents, such as those in Klang, suffered from pungent and toxic fumes daily, resulting in respiratory problems especially among children. In Kuala Langat, the seepage of polluted water from the illegal dumpsites has contaminated the local river.

This illegal plastic waste problem brings several other issues to the fore. First, it highlights the hypocrisy of the developed countries exporting this waste. They are loud and strong in advocating against palm oil due to its purported impact on the environment, yet they are complicit in threatening developing countries as convenient dumpsites.

Second, the illegal plastic waste issue shows that recycling plastic is not just a matter of putting plastic bottles into the correctly coloured recycling bin.

In this age of globalisation, waste management has become internationalised. Various actors and processes are involved across the globe, and pollution can be exported and imported.

The Greenpeace report is, thus, aptly entitled “the recycling myth”, highlighting the brokenness of the globalised waste management system.

This leads to the third point. Multilateral cooperation between governments is imperative to resolve this issue. Developing countries can and should firmly repatriate illegal waste, but without the cooperation of the countries of origin, illegal operators may eventually resort to dumping the waste into the ocean.

If recent cases are any indication, multilateral cooperation may remain a major challenge.

For example, the Canadian government has been dragging its feet for over five years in taking back its illegally exported waste to the Philippines. The Canadian government finally agreed to take back its garbage last week after President Rodrigo Duterte threatened to sever diplomatic ties and dump the garbage into Canada’s territorial waters.

The recent addition of plastic waste into the Basel Convention, the treaty that restricts transboundary movement of hazardous wastes, is a major step forward. However, more needs to be done collectively by the sending and receiving countries to ensure compliance.

Lastly, at the individual level, we should proactively reduce our reliance on single-use plastics where possible.