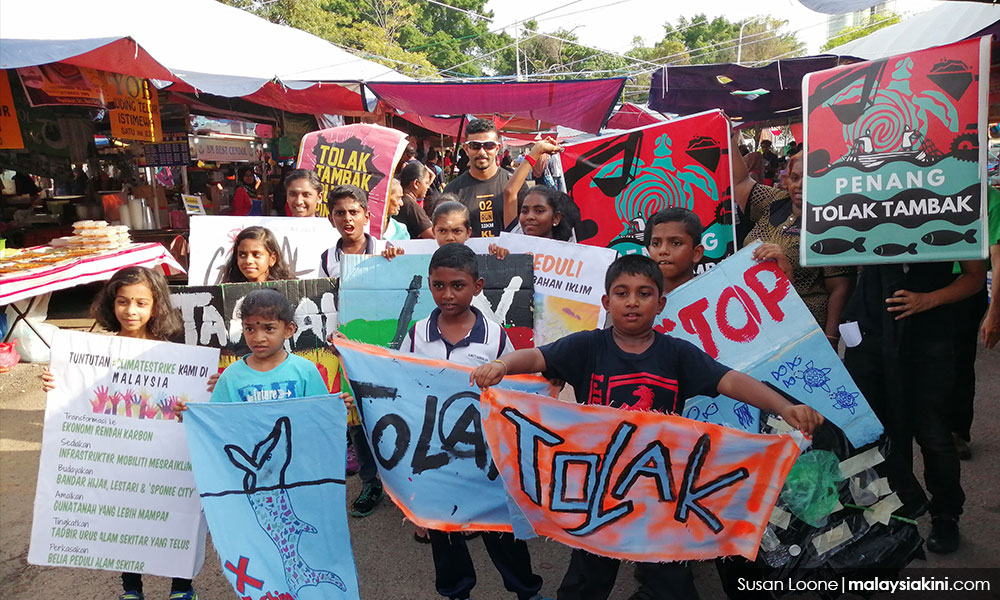 LETTER | In a rather unusual turn, a Penang Island City (MBPP) Councillor, Vino Dini Chandragason mooted a probe by the Education Department into the participation of a group of schoolchildren in a peaceful climate change protest organised by civil society organisations - Klimate Action Utara and Klima Action Malaysia at a Ramadan bazaar in Bayan Baru last Friday.

She alleged in a press statement that these NGOs abused their roles by using children in their protest, and quoted the Child Act 2001 and the Federal Constitution to support her stand and later rationalise her suggestion for a probe by the Education Department on the matter.

I see this suggestion as both surprising and shocking, as a random background check on the school of this group of 11 children shows that they actually come from Sekolah Jenis Kebangsaan Tamil (SJKT) Sungai Ara which was recently hailed as 'eco-warriors' by Education Minister Maszlee Malik for their consistent contribution towards advocating awareness on environmental issues.

Hence, it is very baseless for her to allege that these children were abused and used to forward a cause. I will rather say that these children do realise the seriousness of the matter and took a bold action to come forward to participate in the protest to express their concerns over the Penang Transport Master Plan (PTMP) and Penang South Reclamation (PSR) project together with a few other prominent civil societies.

Their act (the protest) is in line with Article 10 (a) and (b) of the Federal Constitution which grants every citizen the right to freedom of speech and expression and right to assemble peaceably and without arms.

If it was wrong, I'm very sure that the relevant authorities would have taken action much earlier. It was only a peaceful and apolitical protest to raise the awareness of fellow Penangites on both climate change and the negative impacts of the PTMP and PSR projects towards the island's environment in the long run.

We should rather be proud to see children as young as them taking an early lead in serious subjects as such, and advocate for a future-proof and sustainable environment, unlike certain leaders who do nothing but politicise every single subject for their personal interests. We, the younger leaders, must not repeat such mistakes.

The environment is an issue that goes beyond the partisan divide. We can't allow or suggest actions to be taken on the students just for having a different point of view on the matter. In fact, we should actually feel ashamed for letting them down on such issues which has now in return led to their act of participating in such protests.

This entire suggestion rather looks like an desperate attempt to hopelessly defend the PTMP and PSR projects, as well as warn off other civil society organisations about the consequences of going against the state.

The claims of children being abused in accordance with Child Act 2001 of the Federal Constitution only shows the hypocrisy of the councillor, as there is also evidence in forms of pictures of the Chief Minister Chow Kon Yeow using schoolchildren for the state's 'I Love PTMP' campaign.

Hence, I would like to humbly request that the councillor and state government not politicise the issue. The children are there, and must continue to be there, for the betterment of their future. The future is for them and they must not just be promised but be given the right to shape it as they want.