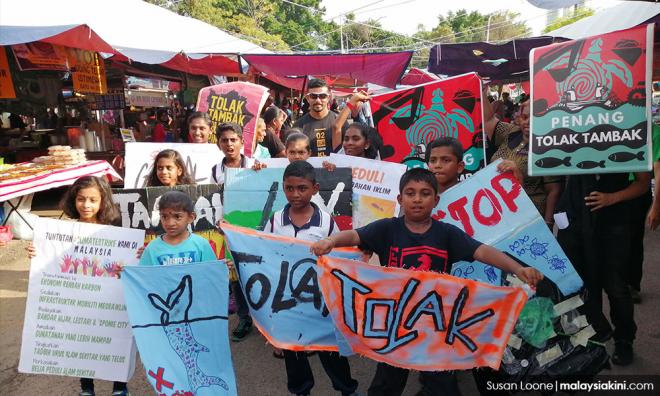 This is false information which is totally not related to my original speech quoted in the above report. Nobody wants those children who participated in that climate change protest to be punished. The kids are innocent.

In my speech, the question that I raised was that did the Penang Education Department grant any approval to the two NGOs involved - Klimate Action Utara Malaysia (Kaum) and Klima Action Malaysia (KAM)?

These NGOs declared that they have obtained the full approval of the school to join in together for the protest. Hence, I’m requesting for the Penang Education Department to release a press statement if the approval has been obtained or not.

Another concern from myself is that during the protest, banners and placards had been used by the children with the words "Penang Tolak Tambak" and "No PTMP".

Are the NGOs going to say this was done by the children personally? If the NGOs are concerned about Earth, you can do such activities legally together with government agencies and bring the children to fill a stadium instead of a crowded open place like a Ramadan bazaar where there are no safety precautions.

It was reported that “Keeping an eye on the group was the school principal Sangga Sinnayah“ and yes, they were there with their parents. But my question is how many of them will own up to their responsibilities if anything had happened to the kids during the protest?

In my speech, I raised that the new government fully supports that Malaysian citizens are guaranteed the rights to freedom of speech, freedom of assembly and freedom of association. I have no objection to that.

Again I’m highlighting to Malaysiakini that I didn’t request for action to be taken against the kids. In my speech, I asked how could the school principal proceed with the protest without an approval letter from the Penang Education Department.

Editor's note: On May 31, Vino Dini Chandragason called for the state Education Department to explain how the 11 schoolchildren had obtained approval from their school to attend the event. She also wanted the police to investigate the matter, in particular under the Child Act, and ensure protests were held legally. In addition, she accused two NGOs, Kaum and Kamy, of abusing their role as NGOs by using children in the protest.

All the above points were reflected in the Malaysiakini news report on the matter. There is nothing in the report that suggests Vino wanted action to be taken against the children. The headline - "Penang councillor wants probe over kids joining climate change protest" - states that Vino was seeking a probe into the protest, not the children. That is why the word "over" is in the headline instead of "Penang councillor wants probe 'into' kids joining climate change protest".

Children should have freedom to assemble peacefully too, says Ramkarpal
6 Jun 2019
Kids protesting climate crisis off the hook, MOE reiterates
4 Jun 2019
No action against schoolchildren in Penang climate change protest
4 Jun 2019
What message is Penang sending to children?
2 Jun 2019