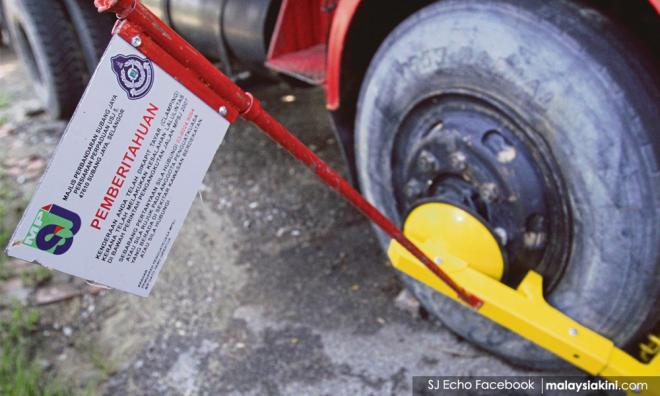 On Jan 3, 2017, I took photos of seven cars that were clamped while parked inside designated parking lots and another towed away at Fraser Business Park, Kuala Lumpur, all because the drivers did not pay for parking.

Each car had a notice of offence for ‘no payment of parking’ stuck to a wiper blade, together with a supplementary notice to warn the driver the car will be towed away if no action is taken within four hours.

Although my car was safely parked in the basement, I could feel the angst the affected drivers were experiencing. It was only much later that I learned Kuala Lumpur City Hall (DBKL) had outsourced its parking contract to Yayasan Wilayah Persekutuan, which in turn privatised the enforcement of parking rules and wheel-clamping to contractor Vista Summerose.

Mercifully, such high-handed actions were discontinued after Kuala Lumpur mayor Nor Hisham Ahmad Dahlan decided to suspend clamping indefinitely from November 2018, but is now facing an RM80 million suit from Vista Summerose for breach of contract, damages and impact on its reputation plus interest.

Since the suspension, irresponsible motorists were having a field day, double or triple parking, obstructing traffic while leaving or waiting inside their vehicles including at bus stops and forcing drivers to pick up or drop off passengers dangerously far from the kerb.

Although the problem has spiralled out of control, the authorities seem to be clueless in overcoming the situation or was political will and sincerity lacking? When enforcement is not conducted regularly, many motorists park where they like.

As enforcement officers can never be everywhere all the time, DBKL must choose the most efficient methods and not be bogged down with clamping, which is time-consuming. If vehicles are obstructing traffic, they should be towed away and not remain there clamped.

DBKL could easily hire all the tow trucks it needs and pay for the service from towing and impound charges collected from errant motorists, but private firms should never be empowered to decide on towing or issuing summonses.

If not, a small printer placed in their motorcycles’ front mesh basket could print out a notice of parking offence to be stuck to a wiper blade. Likewise, they could do the same for illegally parked vehicles.

In this way, an enforcement officer can issue between 50 and 100 notices a day, and the fines collected would add to the coffer of DBKL. Incentives can be given if a mechanism is in place to ensure they would not be overzealous in issuing notices.

If more enforcement officers could not be recruited as part of a cost-saving exercise to limit the size of the civil service, then the public can be roped in to assist in surveillance by recording evidence of parking offences.

DBKL could draft its own bullet-proof contracts and appoint several firms as concessionaires to submit photos or videos, and it is up to enforcement officers to decide whether the evidence received warrants a notice of parking offence.

These concessionaires are to be paid based on the number of notices sent out and it is up to them to recruit and train camera crews, and invest in equipment, without DBKL spending a single sen, unlike huge sums spent on Automated Enforcement System (AES) cameras.

These camera crews should not be allowed to approach or negotiate with the public. They must conduct themselves respectfully without being rude to anyone, as they could be provoked so that their reaction recorded for retribution.

Surveillance could also be carried out by many motor vehicles on the road fitted with dashboard cameras (dashcams). All DBKL needs to do is ask and facilitate the public to submit evidence of illegal parking, but it must have the resolve to handle the volume.

The authorities should have made use of all stage buses in the country to be the extra eyes and ears on the ground by fitting them with dashcams, rear-facing and in-cabin cameras directed not only at the drivers but passengers as well, to deter pickpocketing or molestation.

If these cameras could not transmit live, then the recordings could be downloaded on a regular basis. In this way, most motorists would behave if they spot a stage bus in front of them or in their rear-view mirror, just like noticing a police patrol car.

Taxi drivers would have to choose between waiting at bus stops and receiving yet another notice of parking offence. DBKL should work with the Road Transport Department to ensure vehicle road tax could only be renewed or ownership transferred once all fines are settled.

Finally, all major problems could be fixed if the authorities are more sincere and work together. But when they don’t, we are left to suffer with many of the problems we are facing today and none more evident than what we see on our roads every day.