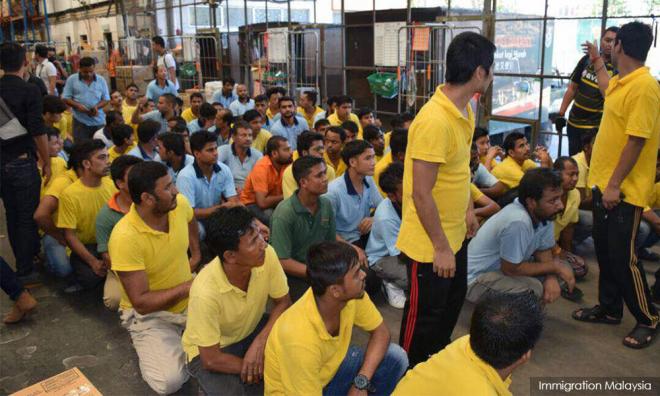 Being a consumer advocate for over 40 years and having worked alongside the Home Ministry over 35 years in addressing security matters and the many challenges and threats that confront us from the huge numbers of documented and undocumented workers and foreigners, I cannot but congratulate current Home Minister Muhyiddin Yassin for being the first to put a strategic plan along timelines open to audit which includes a joint inter-ministerial task force.

The plan is a strict departure from previously announced initiatives which at worst, were allegedly stillborn in view of saboteurs

Manpower is a multi-billion ringgit industry and one should never underestimate the reach and influence of insiders, politicians, political warlords, industry players and predators. As such the five key strategies are namely:

For the strategies to work, it is pertinent that an experienced team be put in place reporting directly to the home minister and a special task force set up comprising of experienced members from the security apparatus, various ministries and the NGO community.

Without this framework in place, this strategy, like its many forerunners since the ’80s will see failure. The home minister is correct, that it is time we make the eco-system where these illegals live and move be made highly uncomfortable.

It is time to get rid of the illegals' safe havens and those who provide them with insulation. It is also pertinent to ask why there are still Malaysian employers using illegal foreign labour?

It is well-known that these employers face penalties based on our Criminal Procedure Code - heavy fines; possible imprisonment and caning when caught employing more than five illegal workers.

No ordinary employer will sneeze at the penalties but the fact remains staring at us in the face - foreigners can still find employment illegally. The inference is super-obvious.

It is obvious that the benefits of cheap labour far outweigh the fear of getting caught which, in turn, means that enforcement is either far from adequate or officers can be bought off.

Given the reports of corruption in the Immigration Department and other security apparatus structures following the human trafficking scandals recently, this is a serious probability which has to be addressed, not ignored or swept under the carpet.

All entry and exit points must be plugged because the situation is no longer a benign one of “helping thy neighbour” in a simple quid pro quo arrangement.

All law-abiding peace-loving Malaysians, pray that the efforts now proposed will address what was previously a labour shortage issue now transformed into one with internal security implications.

And both locals, foreigners and their conduits, whosoever they may be, in the process must be treated as a security risk and action taken immediately.

home ministry
illegal migrant workers
enforcement
Related Reports
We are fully dependent on millions of foreign workers
a year ago
Yoursay: Another 50,000? Time to kick our foreign worker addiction
a year ago
MAICCI wants end to foreign labour freeze on some sectors
a year ago
M'sia, Bangladesh must strictly regulate worker recruitment process
a year ago