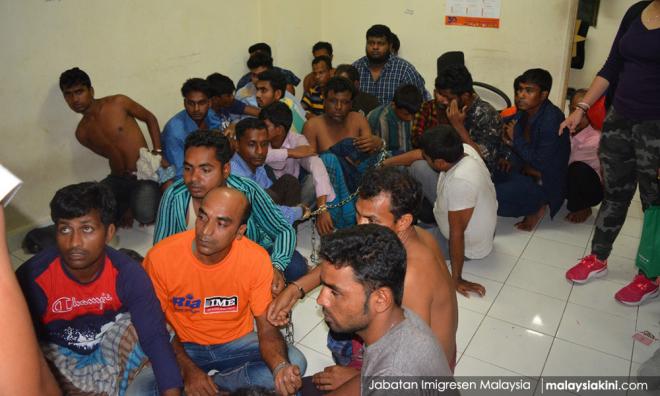 Despite enforcement efforts by the government to “flush out” undocumented foreign individuals otherwise known as "Pati", the numbers continue to increase every year.

Here, we would like to distinguish between the use of the term “illegal” and “undocumented”. No human being should ever be deemed illegal as to lead a life of dignity is a basic human right and labelling any individual as “illegal” is dehumanising at the very least.

While Tenaganita fully acknowledges the presence of millions of undocumented persons in Malaysia as an issue which needs to be addressed, a more comprehensive approach is required in a more transparent manner to tackle the issue effectively. This would require efforts beyond just among government agencies and ministries, involving stakeholders and experts who could provide the necessary insights and resources to create a truly holistic effort.

The government has concerted several attempts to address this issue over the years, primarily focusing on crackdowns and raids. While the general population of Pati also includes individuals who reside in the country but not as migrants, refugees or asylum seekers, it has been noted that the targets have especially been focused on these groups.

To continue on with this similar approach yet again will only result in “skimming off the top” of the issue, instead of scooping up the roots of the problems and nipping it in the bud. Why do we expect different results despite carrying out the same tactics year in and year out?

We need to dissect and analyse this phenomenon to find the most effective solutions and initiative. As such, we have to acknowledge that a vast majority of undocumented migrants in Malaysia enter the country through legal means and with the required documents. However, due to fraudulent activities and corrupt practices, in the process of renewing their working permits, a significantly high number of migrants consequently become undocumented.

As such, perhaps a critical question we need to ask then is, “what is wrong with the system?” We can continue to crack down on these groups and execute raids regularly to locate and deport these individuals but without enforcing against the perpetrators who exploit the system and fuel the growing population of the undocumented, we can expect the issue to persist time and time again.

The issue of a growing population of undocumented persons in Malaysia, according to Home Minister Muhyiddin Yassin has caused great concern among the public. In the same regard, we believe that it is just as much of great concern to the public that there are individuals who are abusing our laws and system to profit over others, some of whom abuse their authority and power - all of which helps in creating this issue in the first place.

Muhyiddin served as the home minister in the former government and continues as such with our new government. In his previous term, in attempts to address this same issue, he proposed and executed similar efforts of enforcement against the undocumented population, all which yielded little long-term results. In our "Malaysia Baru", we seem to continue with old and outdated ways, choosing brute force over strategising the best use of our resources. We must learn to think and act smarter while acknowledging the prevalence of corruption among immigration officers which foster the conditions for this issue to persist.

A more holistic approach would incorporate a thorough attempt at rooting out these perpetrators within the system who disrespect the integrity of our country when they abuse their power for their own materialistic gain. Thus, we should look into comprehensive efforts at cleaning up its enforcement agencies in line with the promises of our new government to fight against the glaring issue of corruption.

From our cases, we know that many migrants become undocumented through no fault of their own from being deceived by agents and employers with the lacking accountability and transparency of the rehiring programme.

We also call upon our government to adhere to its humanitarian and moral obligations as a UN member state which compels us against deporting refugees and asylum-seekers. Malaysia should not ignore the plight of those fleeing from violence and persecution and uphold our obligations to provide a safe refuge for those in need. Aside from forced deportation of refugees and asylum-seekers which infringes international law, a persistent phenomenon of trafficking and exploitation of these individuals at the borders under the guise of deportation continues, including the involvement of enforcement officers.

There is a clear indication of where these issues significantly stem from. The question then is “what are we doing to tackle the root problem” and will our government effectively plan its efforts and strategies in an initiative to not just address this issue but to also tackle the prevalence of corruption and extortion at the ground-level and amongst the frontliners of our nation.