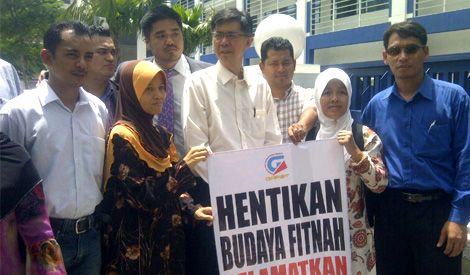 LETTER | We all have friends and foes. But as for politicians, they have political "enemies".

Politicians are often surrounded by critics and troublemakers, especially when something unusual crops up or when the politician has a public announcement to make.

Reporters and journalists will swarm around a politician like bees, hopefully, to get first-hand information to make news.

Sadly, even the perfect ones are not spared. Now you know why the alleged same-sex scandal video involving a minister from the Malaysian Cabinet had hit the road and went viral in social media so fast, within the day.

The video, which went viral, shows that an abnormal sex scandal had taken place.

Now, to determine the authenticity of the content of the sex scandal video, the authority concerned should engage people who are specialised to read faces and voices and to identify who the faces belong to.

In the case of Economic Affairs Minister Mohd Azmin Ali, he should take it with a pinch of salt and ignore the "hoo-haas" until all is proven authentic. Exactly, since you are the one who really knows it (that the video) is all fake, let alone it is done to rid you from politics.

But, if it is true then try to solve it like a man, just like Dr Chua Soi Lek did. He is man to stand up, to admit that it was him in the video clip and had promptly accepted to face the consequences.

Also, we have read in the news of lawmakers in Japan, Taiwan and Korea who had been accused or exposed of being involved in sex scandals (with same or opposite sex) and had quickly resigned from their posts, voluntarily.

Superimposing the technique of people in photos has been around for years. Today, doing this is much easier, with more advanced and sophisticated movie-making equipment and technologies available freely.

Anybody can produce a video within a few hours - without the need of the performer(s) to be present during the shooting of the video. It is all about "DeepFake" computer-generated video.

Why worry? So long if you are having sex with a matured adult who is of legal age, it should be okay and especially when it is done with consent from both parties and in privacy. This is not a rape case, nor an illegal act.

In fact, the person exposing the incident should be punished and brought to face the law for exposure of obscene materials in public.

By the way, in some countries, same-sex marriages are legal.

Oh yes! With high-tech and sophisticated cameras, talents and skills around, anyone could be caught in a sex video unknowingly, until the video is released for viewing by the person or people who are being blackmailed by the producer.

In modern times the male and female who are acting in the video can be manipulated with sophisticated equipment to make the performers look identical to the victim(s).

Prime Minister Dr Mahathir Mohamad said, that the video streaming was cooked up to frame Azmin.

Under these circumstances one should treat this as warfare among politicians - a ploy to oust the incumbent PKR lawmaker from the Cabinet, etc, etc.

As for the police, they have to go catch the producer and cameraman behind the video streaming which went viral on June 11 and bring justice. This "obscene" video release has to stop. It is against the law and in bad taste.

LAU BING is a community activist and writer based in Subang Jaya.