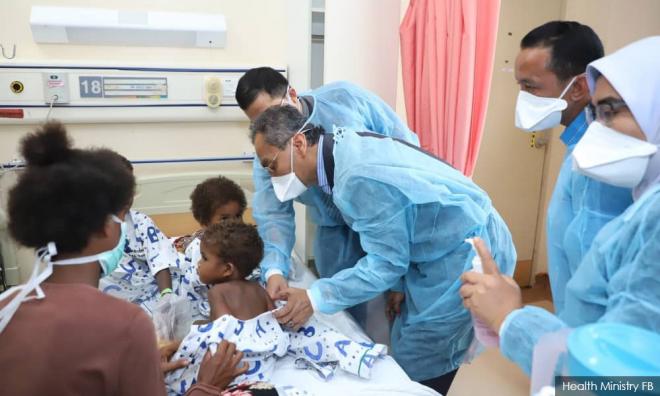 More needs to be done to improve healthcare for Orang Asli

LETTERS | The Health Minister’s recent revelation that measles caused the death of 15 Orang Asli villagers in Kelantan has brought to the forefront the issue of effective healthcare for Malaysia’s indigenous people.

The Orang Asli have been sidelined, with many settlements moved from the jungle to the fringes of towns during the communist insurgency. In a study conducted on Orang Asli settlements, it was found that the heights and weights of children in these resettled areas were lower than their brethren who remained in the jungle.

The cause was attributed to scant natural resources, including plants and animals, for them to survive in their new surroundings. Now with rampant deforestation, the traditionally nomadic jungle tribes have less natural resources to rely upon to survive. Contamination of the rivers leads to diseases like leptospirosis and other enteric infections to thrive.

For centuries, measles is frequently brought to indigenous populations from outsiders - explorers in the past but now from a wider group, including loggers.

In the past, the Jabatan Hal Ehwal Orang Asli (JHEOA), later renamed as Jabatan Orang Asli (JOA), was entrusted with the health care of the indigenous communities with the co-operation of the Health Ministry (MOH). This responsibility was subsequently handed completely to the MOH.

Although the move makes sense, the local input and know-how are still needed to provide a successful healthcare service to the indigenous people.

While the MOH and many NGOs provide healthcare and immunisation services to many Orang Asli communities, we know that many nomadic tribes are hard to track down.

Many will disappear into the jungle when they find out a health team is coming to provide vaccinations. These medical teams will then run clinics to treat the ill, and not for prevention of diseases.

The solution for this problem is through education. Suitable or the best teachers and doctors need to be sent to the Orang Asli communities to help change their mindset.

Many communities have adapted for the better, especially in Perak, where the local health and education officers take it upon themselves to push the Orang Asli agenda. This agenda was initiated by the local paediatricians, who wanted to see an end to treating malnutrition cases. Measles in a malnourished child will most likely end in disaster.

The government has to look into allocating more manpower and funds to these neglected indigenous tribes without considering their voting power.

It is time to redistribute the wealth of the nation to the underprivileged and marginalised from the rich who have benefited for the last few decades. More commitment from big corporations in helping NGOs that deal directly with the indigenous people and the MOH will be most welcomed.

As we know that the best prevention of measles is through vaccination, the immunisation strategy for the Orang Asli needs to be strengthened. Assistance must be provided to improve their nutrition and general hygiene. These steps can only work through educating the communities, especially the children. The best way to reach the young ones directly is through their mothers.

Groups like the Islamic Medical Association of Malaysia Response and Relief Team (IMARET) have been going around installing local water treatment facilities to the Orang Asli populations and providing basic healthcare service but more efforts are needed, especially from the authorities.

We need a concerted government commitment to help and educate these people. We need to teach them to fish rather than just provide the fish.

There is a lot more work to be done in a consistent manner to aid the marginalised Orang Asli communities. The sooner these efforts are made, the better will be the life of these people.

The measles deaths which affected the Bateq community are a tragedy that we need to recognise, learn from, and prevent from happening again.

Our condolences and prayers go to the families and relatives of the victims.